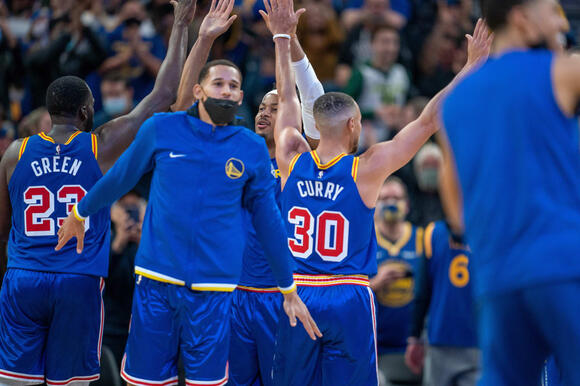 The Golden State Warriors beat the Chicago Bulls on Friday night, and Steph Curry had a sensational shot in the first half.

The Golden State Warriors defeated the Chicago Bulls 119-93 in California on Friday night to advance to an 11-1 record, which is the best in the NBA.

Coming into the game the Bulls had been tied with the Washington Wizards for the best record in the Eastern Conference, but have now fallen to 8-4.

During the first half of Friday's game, two-time MVP Steph Curry hit a remarkable shot, and the clip of the shot can be seen in a tweet that is embedded below from the Twitter account of the Warriors.

Curry has been off to a sensational start to the new season, and there is a good chance if he and the Warriors keep it up he could be holding his third MVP trophy at the end of the regular season.

The wife of NBA legend Steph Curry has called the gossip 'ridiculous'. The wife of Golden State Warriors star Steph Curry, Ayesha, has addressed rumors that the couple is in an open relationship, labeling the speculation 'disrespectful'. Claims circled on gossip blogs in recent weeks and cited an anonymous tip...
CHARLOTTE, NC・15 DAYS AGO
NBC Sports

Bucks guard Grayson Allen addressed the Flagrant 2 foul he committed on Chicago Bulls guard Alex Caruso with a string of messages in his Discord server Saturday afternoon. "It was very unfortunate how it played out," Allen wrote. "I jumped to block it with my left and as I'm spinning went to grab the ball with my right hand not throw him down. It was a really hard fall and I'm glad he's okay. If I could do the play over again knowing he'd fall like that I wouldn't make the play."
NBA・2 DAYS AGO
FastBreak on FanNation

Jarrett Allen has been listed as questionable for Monday's game between the New York Knicks and Cleveland Cavaliers.
NBA・2 DAYS AGO
FastBreak on FanNation

Here's What Steph Curry Said After The Warriors Beat The Jazz

Steph Curry spoke to the media after the Golden State Warriors defeated the Utah Jazz.
NBA・2 DAYS AGO

Steve Kerr spoke to the media after the Golden State Warriors beat the Utah Jazz.
NBA・2 DAYS AGO
Chicago Tribune

In the final three minutes of Monday’s game in Oklahoma City, the Chicago Bulls panicked. Zach LaVine and Troy Brown Jr. ran straight into half-court traps. Nikola Vučevic sent off-balance 3-pointers sailing past the rim. Billy Donovan called timeouts in an urgent attempt to calm his team, watching as the Thunder carved a 28-point Bulls lead down to a single point. The bell ultimately saved ...
NBA・1 DAY AGO
95.7 The Game

Stephen Curry and the Golden State Warriors have gone through a rough patch as of late. It’s no surprise that the stretch has coincided with Draymond Green missing several games due to injury. Draymond has missed the last nine games for the Warriors, including the debut game for Klay...
NBA・1 DAY AGO

The Cleveland Cavaliers the New York Knicks Monday night at Rocket Mortgage FieldHouse, with Kevin Love driving the 3 train all night, Darius Garland showing his star power, Isaac Okoro playing gritty ball and Rajon Rondo having a solid debut to help lead the Cavs to a 95-93 win.
NBA・1 DAY AGO
FastBreak on FanNation

The Cleveland Cavaliers have announced their starting lineup for Monday's game with the New York Knicks.
NBA・1 DAY AGO
fadeawayworld.net

Chicago Bulls Almost Passed Up On Derrick Rose In 2008 Draft Because Of His Brother: "If You Can’t Accept My Brother, Don’t Pick Me.”

Derrick Rose is one of the biggest 'what-ifs?' in NBA history. The current New York Knicks point guard entered the league with high expectations, ready to take the Chicago Bulls back to the top of the association, which he did to some extent. However, injuries were ruthless with him and prevented Rose from having a better and more successful career.
NBA・1 DAY AGO
Sportsnaut

The 2021-22 season has been derailed to an extent by COVID-19 with multiple NBA MVP candidates finding themselves sidelined. It
NBA・2 DAYS AGO

Shorthanded Bulls look to get on track against Thunder

After a hot start to the season, the Chicago Bulls have struggled over the last two weeks. Heading into Monday’s
NBA・2 DAYS AGO
FastBreak on FanNation

The Orlando Magic are hosting the Chicago Bulls on Sunday evening in Florida.
NBA・2 DAYS AGO
Sportsnaut

The numbers favor the Miami Heat. Miami, which plays host to the New York Knicks on Wednesday night, has the
NBA・23 HOURS AGO
FastBreak on FanNation

Mitchell Robinson is expected to play on Wednesday night in the game between the New York Knicks and Miami Heat.
NBA・5 HOURS AGO

The second leg of a back-to-back opens a three-game road swing for the Toronto Raptors, who visit the Chicago Bulls
NBA・13 HOURS AGO
670 The Score

Zach LaVine, Javonte Green back for Bulls, but DeMar DeRozan will rest against Thunder

Bulls guard Zach LaVine will return Monday from a five-game absence after dealing with a left knee injury, while forward DeMar DeRozan will have a rest night, coach Billy Donovan said.
NBA・1 DAY AGO
Sportsnaut