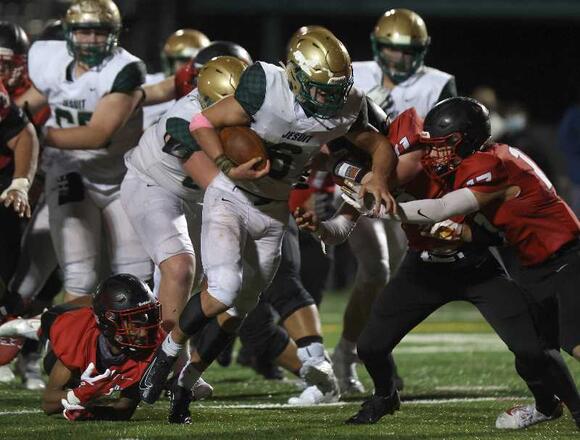 After trailing 7-6, Jesuit football scored late and added a pick-six to eliminate Clackamas from the 6A playoffs.

Trailing 7-6, Jesuit High football finally broke through late against Clackamas to take a lead and added on a pick-six to seal the 19-7 win.

The win for the No. 9 Crusaders (10-1) sends them to Class 6A quarterfinals where they will play No. 1 Lake Oswego.

For Clackamas, its season ends with a 10-2 overall record with the only other loss coming to No. 4 Central Catholic.

Mustangs senior is nearing 2,000 points, but faces new challenges along the way.The journey has been a long one for Milwaukie guard Cali Denson. And there's been some bumps along the way. But that doesn't mean the Mustangs' star won't get the happy ending she seeks. Denson, a four-year starter at point guard — she's approaching 2,000 points in her career — and Milwaukie's leading scorer, hopes to lead her final Mustang team into the Class 5A state playoffs and beyond. "I think we are capable of … making it to the playoffs and even making a run possibly to...
MILWAUKIE, OR・2 DAYS AGO