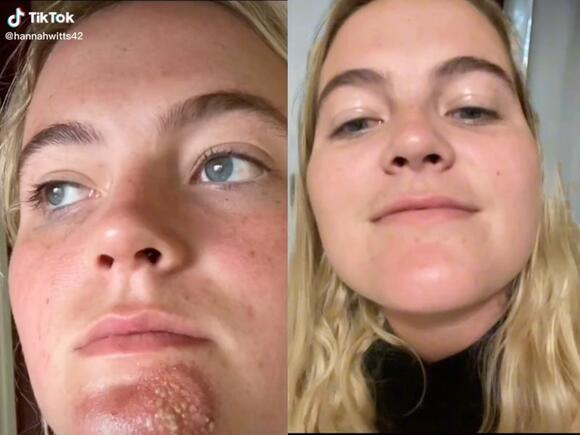 A woman has shared a video of the infection she allegedly developed after kissing a man with beard stubble, while joking that she is a “stubble survivor”.

On Wednesday, Hannah, who goes by the username @ hannahwitts42 on TikTok , uploaded a video showing the effects the stubble had on her chin in response to another user @ nebarb who shared a TikTok of her inflamed-looking chin with the caption: “The dry skin beard after kissing a boy with stubble.”

In her own video, Hannah shared a series of photos of her own chin, with the first showing the area covered with what appeared to be a burn and small pus-filled blisters.

The video then transitioned into a close-up photo of the impacted area of Hannah’s face, in which the number of blisters could be seen growing larger on the circular wound.

Hannah’s slideshow also included photos of the wound without the blisters, as well as one in which she could be seen with a bandage covering most of the lower bottom of her face.

In the final photo, the infected area appeared to be healing as it showed Hannah’s skin peeling around the wound.

Hannah concluded the video with a brief clip of her face now, with the TikTok user smiling as she positioned her chin close to the camera to show the wound completely healed.

“I’ve been waiting to tell my story,” Hannah captioned the video. “#StubbleSurvivor.”

♬ Lights Are On - Tom Rosenthal

While Hannah did not share additional details about the ordeal, the video has gone viral on TikTok, where it has been viewed more than 8.7m times and where thousands of viewers have shared their horror over the incident.

“This made me never want to speak to a man again,” one viewer commented, while another said: “Beards are… contagious?”

Someone else added: “This is why I have an irrational fear of facial hair .”

Others in the comments were curious about the details of the wound reportedly caused by stubble, with some suggesting that Hannah developed a staph infection.

Staph infections are highly contagious infections caused by bacteria commonly found on the skin or in the nose, with common symptoms including “boils and oozing blisters”.

“So was it a staph infection or did he have beard oil in and you had a bad allergic reaction to it?” one person asked. Others questioned whether the wound was cellulitis , a common bacterial skin infection.

While many viewers were shocked by the incident, the video also prompted others to reveal similar experiences after being intimate with partners with facial hair.

“This happens to me too queen, why is our skin so sensitive,” one person commented, while another said: “I got a rash on my collarbone after cuddling with a dude who had a beard for less than three minutes.”

According to Debra Jaliman, MD, a dermatologist in New York City who previously spoke to Women’s Health , beards can be “breeding grounds” for germs if not properly cleaned.

“If a guy doesn’t groom his mustache and beard properly, they can become breeding grounds for germs,” she said.

The outlet also noted that beards can “camouflage symptoms of a transmissible skin issue” such as herpes or warts.

According to Medical News Today , there is also a medical condition called “beard burn,” which “occurs when a person’s skin comes into contact with another person’s facial hair” and “often presents as an inflamed rash that is itchy and dry”.

While Hannah did not specify why the wound became infected, the clip prompted one one viewer to conclude: “Bro, from now on, we’re going to kiss with our masks ON.”

Oh for the love of god!!!!! Who hasn’t gotten razor burn from a guy on their chin🤦‍♀️ And I’m not including anyone but women at this point. Just saying….

Depends on which beard you were kissing. Upper... or lower. All kinds of funk, either one.

really? this is what the media publishes? and this is what women of class want published? get over yourself....how many men have you done this too? go to church darling....

Belly buttons - we all have them - whether you have an innie or an outie but as a smaller part of our body, some may overlook the personal hygiene routine of regular washing that is needed to take care of the area. (If you have omphalophobia - a fear...
CELEBRITIES・1 DAY AGO
Fortune

Never miss a story: Follow your favorite topics and authors to get a personalized email with the journalism that matters most to you. As COVID-19 infections continue to escalate in the new year, some patients have been reporting a strange new symptom: night sweats. Commonly associated with other conditions like...
PUBLIC HEALTH・20 DAYS AGO
Radar Online.com

Bob Saget’s suspected cause of death has been revealed and cops believe the late comedian “suffered a heart attack or a stroke” due to the circumstances in which they found his body. Article continues below advertisement. According to Daily Mail, authorities that arrived at Saget’s Ritz-Carlton hotel...
CELEBRITIES・12 DAYS AGO
Daily Mail

An Indian farmer was left astonished yesterday after one of his goats gave birth to a kid with the 'face of a human' which neighbours described as a 'warning from God'. The goat belonging to farmer Shakar Das, 46, gave birth to several offspring in Gangapur village in the northeastern Indian state of Assam.
INDIA・25 DAYS AGO

Giant cat looks set to break world record after weighing in at 27.5lb

NO kitten around — Yulia Minina’s pet looks furmidable. She says the Maine Coon weighs 12.5kg (27.5lb), making it just a whisker away from a world record. And as Kefir is only 22 months, she still has growing to do in Stary Oskol, Russia. Yulia explains: "I could...
PETS・4 DAYS AGO
The Week

Rock star Meat Loaf reportedly died at 74 after contracting the coronavirus and becoming seriously ill. The singer, known for hit albums like Bat Out of Hell and appearances in films like Fight Club and The Rocky Horror Picture Show, died Thursday night, his agent confirmed. On Friday, TMZ reported that earlier this week, Meat Loaf was scheduled to attend a business dinner for a show he was working on, but he had to cancel because he "became seriously ill with COVID." His condition "quickly became critical," the outlet said.
PUBLIC HEALTH・2 DAYS AGO
Lawrence Post

The 27-year-old mom of six reportedly died after battling COVID-19 and pneumonia related to the virus. Her husband said that he and his wife were not vaccinated due to their beliefs. The mother was pregnant with their sixth child when the couple caught COVID-19. The woman from Texas, Crystal Hernandez,...
WOMEN'S HEALTH・1 DAY AGO
The US Sun

Prince Andrew had personal ‘massage mattress’ he travelled with and hired girl to give him pedicures, pal claimed

PRINCE Andrew would travel abroad with his own personal massage mattress and hired a girl to give him pedicures, a pal claimed. The pampered prince is reported to have become increasingly concerned about preening himself as he "rediscovered his youth" in the early noughties. Pals at the time claimed the...
CELEBRITIES・2 DAYS AGO

"I will just say that he was simply larger than life and I will miss him every day for the rest of mine," Meat Loaf's daughter, Amanda Aday wrote on Facebook.
CELEBRITIES・2 DAYS AGO
Popculture

Good Morning America is down another anchor in the studio this week as the omicron variant of COVID-19 spreads rapidly throughout the country. Anchor Robin Roberts shared that she had tested positive for the virus just hours after co-star Amy Robach announced her own positive test. Roberts, who didn't appear in the studio this week, took to Twitter to share the latest on her health.
TV & VIDEOS・2 DAYS AGO
CBS News

A popular Czech folk singer who deliberately caught COVID-19 has died, her son says. Hanka Horka, who was not vaccinated, caught the virus from her son and husband, who are vaccinated but still caught it over the holidays, according to BBC News. The 57-year-old purposefully did not stay away from...
PUBLIC HEALTH・3 DAYS AGO
Radar Online.com

Betty White looked frail and had difficulty uttering words in her final message to her fans only days before she took her last breath. The Hollywood icon recorded a video in preparation for her 100th birthday celebration. Sadly, she died weeks before turning the triple-digits. Article continues below advertisement. The...
CELEBRITIES・1 DAY AGO
LIVESTRONG.com

The 4 Best Supplements and Vitamins for Sinusitis, According to a Doctor

A doctor breaks down the best vitamins and supplements to help support your immune system when you have sinusitis. Plus, what to look for in safe supplements.
HEALTH・2 DAYS AGO
Davenport Journal

The 45-year-old dad was in excellent health before he was struck down with the Corona virus and rushed to hospital. The man reportedly sent a text message to his ex-partner saying he was getting vaccinated as soon as possible less than two weeks before he died from Covid. According to reports, the man hadn’t taken the vaccine as a result of reading lies about the vaccines on social media.
PUBLIC HEALTH・3 DAYS AGO
Newsweek

"She was making moves on your husband right in front of you so I can see why you did what you did," one commenter wrote.
RELATIONSHIPS・1 DAY AGO
Daily Mail

Christina Aguilera released her second Spanish-language project on Friday, which comes almost 22 years after her first one. The 41-year-old pop star's EP La Fuerza follows 2000's Mi Reflejo, and features the singles Pa' Mis Muchachas, Somos Nada, and the latest, Santo. The siren took to Instagram to share her...
CELEBRITIES・2 DAYS AGO
101.1. The Wiz

Many of the final social media posts from Ian Alexander Jr., Regina King's son and a DJ, singer and producer who performed as Desduné before dying by suicide, eagerly look toward the future. But others offered more cryptic messages.
CELEBRITIES・1 DAY AGO
The Independent

Multiple sclerosis could be caused by the common ‘kissing disease’ virus, scientists say

The debilitating disease multiple sclerosis could be caused by the common virus behind "kissing disease", scientists claim.A new study from Harvard University suggests the chronic disease could be from an infection of Epstein-Barr, a herpes virus that causes infectious mononucleosis.Mono or glandular fever, as it’s otherwise known, is colloquially known as "the kissing disease" for being highly contagious through saliva.While causing fatigue, fever, rash, and swollen glands, researchers propose that the Epstein-Barr virus could also establish a latent, lifelong infection that may be a leading cause of multiple sclerosis.Affecting 2.8 million people, there is no known cure for the...
SCIENCE・9 DAYS AGO
People

Katherine Schwarzenegger Pratt loves a matching moment!. The Gift of Forgiveness author, 32, who is currently expecting her second child with husband Chris Pratt, shared a cute snap to Instagram on Thursday, featuring her and her 17-month-old daughter Lyla Maria both wearing white sherpa sneakers. In the sweet photo, Lyla's...
CELEBRITIES・2 DAYS AGO
Indy100

From time to time, we all crave a takeaway - but one man has shown his serious customer dedication (and hunger) after trekking through the treacherous snowy weather to score some food... only for the restaurant to be closed. Toronto recently had a historic winter snowstorm that led to drivers...
RESTAURANTS・1 DAY AGO