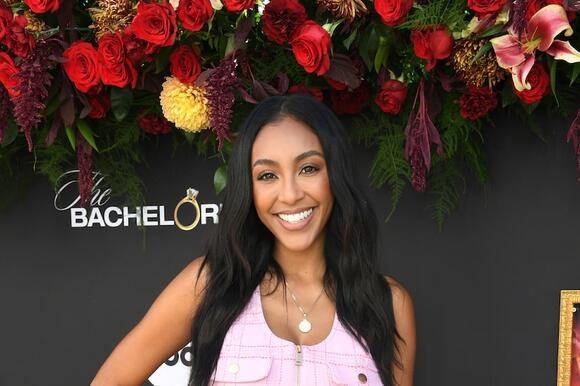 “The Bachelorette” alum Tayshia Adams has been admitted to the hospital.

On Thursday, Tayshia posted a video from her hospital bed. She captioned the Instagram Story pic, “Welp I've been here since 9:30 a.m. What a day.”

While Tayshia didn’t explain what caused her hospitalization, she did have an IV hooked up to her arm. 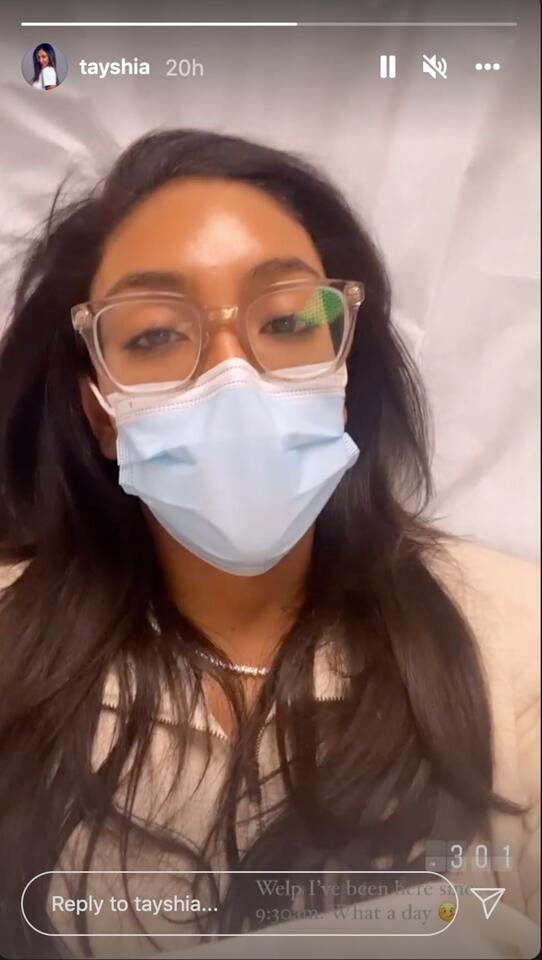 The hospitalization came just a few days after Tayshia and her fiancé Zac Clark participated in the New York Marathon.

On Wednesday, Tayshia revealed on Instagram that she “physically could not walk Monday and Tuesday.” She added, “It was the most painful thing in the world."

Though it was the first time that Tayshia had ever competed in a marathon, she made it to the finish line in 4 hours and 40 minutes. 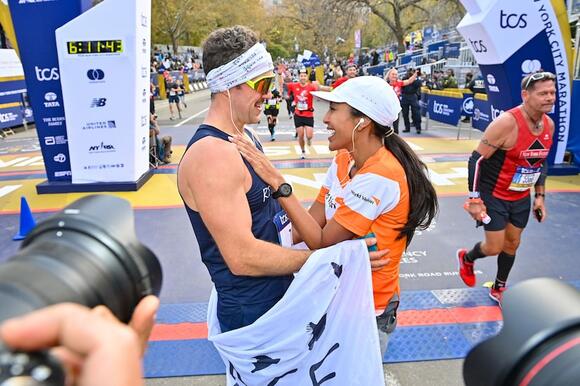 Following the race, Zac gushed, “She would never tell the world how truly inspiring her performance was yesterday at the @nycmarathon but I will. Leading up to Sunday she did dozens of interviews where she could have talked about her chronic knee/back pain or her inability to train due to her insane schedule but instead she talked about her charity of choice, @worldvisionusa, and how grateful she was for all the support from family, friends, fans and strangers.”

More rose petals are falling in Bachelor Nation! First, Clare Crawley and Dale Moss called it quits at the end of last year. Surprising probably no one, Tayshia Adams and Zac Clark broke up around the same time. Then, Katie Thurston and Blake Moynes ended their engagement amidst Instagram drama, where Katie revealed she was dating John Hersey from her season of […] The post Bachelor In Paradise Stars Riley Christian And Maurissa Gunn Call It Quits appeared first on Reality Tea.
CELEBRITIES・23 HOURS AGO
extratv

“Bachelor in Paradise” couple Raven Gates and Adam Gottschalk are first-time parents!. On Tuesday, Adam announced that Raven gave birth to a baby boy. On his Instagram Story, he wrote, “Little man made it. Had emergency C-section after pushing for about an hour and a half. Mom and baby are doing very well.”
CELEBRITIES・9 DAYS AGO
extratv

Has Olivia Rodrigo Split with Adam Faze? All the Clues

Singer Olivia Rodrigo and film producer boyfriend Adam Faze are sparking split rumors!. Rodrigo has everyone talking, since she unfollowed Faze’s personal and professional accounts on Instagram. Page Six reports that Faze is leaving Los Angeles and moving to New York. Fans started speculating that the pair split when...
CELEBRITIES・6 DAYS AGO
extratv

“Extra’s” Cheslie Kryst chatted with Isabel May about her breakout role on the “Yellowstone” prequel series “1883.”. Fans are speculating that her character Elisa Dutton is pregnant, but what does she have to say? She said, “That’s a potential possibility. I will say we’ll find out pretty soon whether or not that’s the case.”
CELEBRITIES・1 DAY AGO

The Vanderpump Rules star celebrated his milestone birthday with celebrations in Las Vegas, which he shared on his Instagram account. His Stories included a night out with friends, and in one video, Kennedy can be seen holding hands with a woman, who was seen in a handful of additional Instagram Stories throughout the night.
CELEBRITIES・2 DAYS AGO
extratv

The actress just announced the arrival of her new bundle of joy with the sweetest photo of the little one’s feet. “Welcome to the world, Baby Arlo! ✨” She wrote, adding, “The newest addition to our family, reminding me how infinite love can be. 💖”
CELEBRITIES・1 DAY AGO
extratv

Camila Cabello and Shawn Mendes are fueling reconciliation rumors again!. Weeks after they were spotted walking their dog Tarzan together in Miami, Cabello left a cute comment on Mendes’ Instagram. Shawn shared a clip of himself in the recording studio and asked fans in the caption, “Y’all dig this?”...
CELEBRITIES・7 DAYS AGO
The Independent

YouTuber and crafter Melanie Ham, who was well-known for the stories about her art and personal life she shared on social media, has died at the age of 36.According to posts shared to her social media accounts, which were published by her husband Robert Ham, Ham passed away from cancer on 12 January.“It is with a heavy heart and deep sadness I share the news of the passing of my sweet, amazing, beautiful wife Melanie,” the caption of the Instagram post reads. “If you’ve been following our journey I’m sure you were, like us, hopeful she could defeat this...
CELEBRITIES・1 DAY AGO

“Baskets” star Louie Anderson has been admitted to the hospital while battling cancer. Anderson’s publicist Glenn Schwartz said in a statement, “​Iconic comedian Louie Anderson is currently in a Las Vegas hospital being treated for DLBCL Diffuse large B cell lymphoma, a form of cancer. He is resting comfortably.”
CANCER・9 DAYS AGO
GMA

Olympic skater Adam Rippon has a big secret to share!. On Wednesday, Rippon revealed that he married longtime boyfriend Jussi-Pekka Kajaala on New Year’s Eve. Along with posting some pics of them with their dog, he wrote on Instagram, “One afternoon JP and I looked at each other and said the very classic *romantic* phrase of “let’s just go do it now”. So we did. It was just the three of us and it was perfect 12/31/21.”
CELEBRITIES・8 DAYS AGO
extratv

Over the weekend, Meghan, 36, and her boyfriend Tyler Cain, 39, eloped at Ironwoods Beach in Maui. The location holds special meaning to Tyler, whose parents honeymooned there after their own wedding. Of their decision to elope, Meghan told People magazine, “It was so easy. We decided to elope one...
RELATIONSHIPS・10 DAYS AGO

On Monday, Sweetin took to Instagram to announce her engagement to Mescal Wasilewski. Along with showing off her ring, she wrote, “SI love you Mescal, for always. You’re my person. I can’t wait to see the life that lies ahead for us.”. “Here’s to us, @ghostfacelito and...
CELEBRITIES・9 DAYS AGO
extratv

Nick Jonas, 29, and Priyanka Chopra, 39, are parents!. Priyanka announced the news on Instagram, revealing they have welcomed their first child via surrogate. "We are overjoyed to confirm that we have welcomed a baby via surrogate. We respectfully ask for privacy during this special time as we focus on our family," the actress wrote.
CELEBRITIES・6 DAYS AGO
extratv

Brad Garrett & IsaBeall Quella Wed After More Than a Decade Together

Brad Garrett, 61, and longtime love IsaBeall Quella, 37, are officially married!. People reports the couple said “I do” on November 11, 2021, in Montecito California. Garrett said in a statement, "I married the love of my life," teasing, "Her, not so much." Quella walked down the aisle...
RELATIONSHIPS・1 DAY AGO
extratv

Why Heidi Klum Got Anxious Over Her Snoop Dogg Collaboration

Model and TV host Heidi Klum is adding “singer” to her résumé. “Extra’s” Terri Seymour spoke with Heidi about singing for the first time with Snoop Dogg on a song called “Chai Tea with Heidi.” She shared, “I’m pinching, pinching myself. I can’t believe this is happening to me… because I’m obsessed with Snoop Dogg.”
MUSIC・9 DAYS AGO

Regina King Remembers Son Ian After His Death by Suicide

Oscar winner Regina King is grieving the loss of her beloved son, Ian Alexander Jr., who has died the week of his 26th birthday and one week after her 51st. People reports his death was a suicide. In a statement, the actress said, “Our family is devastated at the deepest...
CELEBRITIES・5 DAYS AGO
Deadline

Morgan Stevens, who played numerous roles on television before a tragic confrontation with police derailed his career, was discovered dead at age 70 in his home today as part of a police wellness check. No information on the cause of death was released by police. His death was first reported by TMZ. Born October 16, 1951, in Knoxville, Tennessee, Stevens headed to Hollywood soon after graduating college. He appeared as Paul Northridge in one episode of The Waltons and in three reunion movies, including A Wedding on Walton’s Mountain, in which his character married Erin Walton (played by Mary Elizabeth McDonough). His first...
KNOXVILLE, TN・21 HOURS AGO
Insider

Kanye West told Hollywood Uncovered that he's decided not to tweet and overshare about his divorce from Kim Kardashian.
CELEBRITIES・2 DAYS AGO