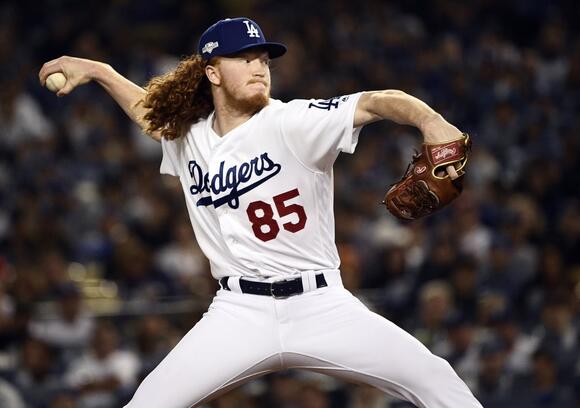 Dodgers flamethrower Dustin May was lost early in the 2021 season. After undergoing elbow surgery, LA president Andrew Friedman talks about when he could be back in 2022.

Coming out of Spring Training 2021, Dustin May, in his first shot at a full-time starting role, was looking exceptional. Unfortunately, it wouldn't last long and he started just 5 games before suffering a season-ending injury in Milwaukee.

Watching Dustin May go down was probably one of the most heartbreaking moments of the 2021 Dodgers season . Everyone knew it was bad when "Code Red" left the mound with the Dodgers' training staff member, so it wasn't really a surprise when he had to undergo Tommy John surgery.

Recently, a video of him starting to throw surfaced while President of Baseball Operations, Andrew Freidman, had an update on May's status.

According to Andrew Friedman ( via the LA Times ), there has been some good progress with Dustin's recovery, and they're hoping he will be able to make a substantial contribution in the second half of next season for the Dodgers.

Everything to this point has been incredibly positive. I think he is going to impact us at some point in the second half. And if we’re fortunate enough to get into October, I think he’ll be a real weapon for us.

If May does get back on the mound next season, it will most likely be in a bullpen capacity rather than as a starter. The rehabilitation process from Tommy John surgery is lengthy and difficult, and the club will almost certainly want to ease him back into things slowly.

With that being said, getting a guy like Dustin May into the bullpen for an October run would be huge for the Dodgers in 2022.

When it comes to the 2022 campaign, one of the most asked questions for Dodgers fans is what will become of starting pitcher Trevor Bauer. He's in his second year of a three-year, $102 million contract, but he was put on paid administrative leave last season after accusations of sexual assault ...
PASADENA, CA・20 DAYS AGO
FanSided

Corey Seager’s gone. Trea Turner isn’t under contract beyond next season. Gavin Lux is falling out of favor in short order. So what’s the Los Angeles Dodgers‘ long-term plan at arguably the most important position on the field?. Why do we ask? Because recent projections indicate...
MLB・1 DAY AGO
Inside The Dodgers

Joe Kelly is quite the character around Major League Baseball. With two championships under his belt across a 10-year career, Kelly has made his name known in a big way. He took one World Series against the Dodgers in 2018 and another with Los Angeles in 2020, finally bringing a title back to the ...
MLB・2 DAYS AGO
FanSided

Even with a theoretical regression ahead of him, there simply aren’t many pitchers like the Dodgers‘ Clayton Kershaw. Not just active. There aren’t really many Kershaws … in the history of baseball, and it might be a very long time before any more Kershaws emerge. Pitchers...
BASEBALL・2 DAYS AGO

Tyler White agreed to terms for a minor league contract with the Milwaukee Brewers.
MLB・2 DAYS AGO
WEEI Sports Radio

Jonathan Papelbon joined Rob Bradford on the Live BP podcast to make it clear he has no intention of following in the footsteps of his former teammate Jon Lester, saying he will never announce his retirement.
MLB・19 HOURS AGO
Inside The Dodgers

ESPN Buster Olney thinks Treinen is one of the bullpen arms in baseball.
MLB・2 DAYS AGO
Audacy

Jonathan Papelbon joined WEEI’s Live BP Show and spoke about the backstory behind why he and Bryce Harper went at it in the Washington Nationals dugout in 2015.
MLB・15 HOURS AGO
WFAN Sports Radio

The one thing — the one thing — Yankees fans could reliably count on Gleyber Torres to provide, even during his darkest times in 2020 and 2021, might have just disappeared thanks to an architect’s whim. So, in case you’re counting, the Yankees signed Gerrit Cole, then...
MLB・8 HOURS AGO
Inside The Phillies

The 2021 Phillies were a top heavy team, both in terms of production and salary. Given that level of top talent, which players from last year's team have a shot at reaching Cooperstown?
MLB・9 HOURS AGO
Inside The Dodgers

The Dodges reportedly have signed pitcher Accimia Morales and position player Samuel Muñoz.
MLB・1 DAY AGO
Inside The Blue Jays

A Look Into a Growing Royals Collection: ‘It Started With Two'

The Kansas City Royals are one of the most intriguing franchises in MLB history, and one fan of the team has an impressive collection of team memorabilia.
MLB・2 DAYS AGO
Inside The Phillies

The Philadelphia Phillies have made their move on Venezuelan prospect William Bergolla Jr.
MLB・2 DAYS AGO
Chicago Tribune

The middle of January traditionally signals the changing of the seasons in Chicago, a time to wash away the gloom of another Bears disaster and start thinking warm thoughts. In most years, the sidewalks are caked in ice, another polar vortex is plunging down from the Arctic and the Cubs and White Sox are holding their annual fan fests at a downtown hotel, celebrating the past while hyping the ...
NFL・20 HOURS AGO