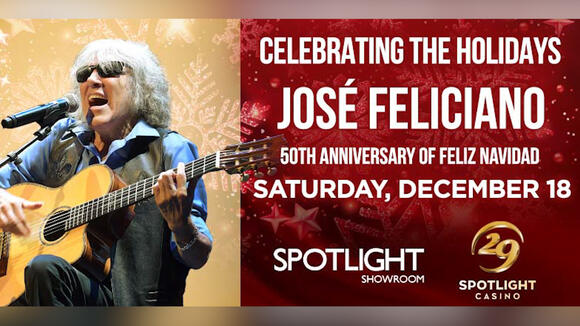 One of the most beloved Christmas songs is coming to the Spotlight 29 Casino on its 50th anniversary.

Spotlight Showroom at Spotlight 29 Casino in Coachella will ring in the holidays with a special event called “José Feliciano: 50th Anniversary of Feliz Navidad Performance.

Tickets can be purchased at spotlight29.com .

Internationally celebrated musician, singer and composer José Feliciano has released more than fifty albums worldwide in both English and Spanish and is best known for his many international hits, including his rendition of the Doors' "Light My Fire."

His music is known for its fusion of styles—Latin, jazz, blues, soul and rock—created primarily with his unique, signature acoustic guitar sound. His oftentimes mellow easy listening influences are easily recognizable in many songs heard around the world. In the United States,

Feliciano first received widespread popularity in the 1960s after his 1968 album “Feliciano!” reached number two on the music charts.

In 1970, Feliciano released an album of Christmas music, originally entitled “José Feliciano,” festively resembling a Christmas present in gold wrapping with a big green and red bow. Later, the album would assume the name "Feliz Navidad," after the new Christmas song Feliciano had written for the album as an homage to his childhood growing up in Puerto Rico.

"Feliz Navidad" has been covered internationally by countless artists, becoming a traditional part of the musical landscape around the world at Christmas time. Each year during the Christmas season, "Feliz Navidad" returns to the airwaves as one of the most played and most downloaded songs of the season.

"Feliz Navidad" is also recognized by ASCAP as one of the 25 all-time most-played Christmas songs in the world and it is in the Grammy Hall of Fame. The classic Christmas song is one of the top 10-performing hits in the decade-plus history of Billboard's Holiday 100 chart, and one of the most popular Latin songs of all time.

Regarding the best-selling Christmas single, “It just came to me; there’s no rhyme or reason,” Feliciano recently told Billboard magazine. “The first lyric came to me, then I put the English lyric into it, not realizing I had made it the only bilingual Christmas song ever in the world. I created a monster.”

José Feliciano is recognized as the first Latin Artist to effectively cross over into the English music market, opening the doors for other artists who now play an important role in the American music industry.

The first group of qualifying participants commences constructing their homes as owners/builders at the Palm Desert Merle Dr. Self-Help Project at the groundbreaking ceremony. Ten families out of fourteen walked the grounds of their future forever homes. "Participants will complete the build under the technical assistance and guidance of Coachella Valley Housing Coalition construction staff, The post The city of Palm Desert is working to bring home ownership to some low-income families appeared first on KESQ.
PALM DESERT, CA・13 HOURS AGO
KESQ News Channel 3

A new attraction at The River in Rancho Mirage is building some anticipation. Dave and Busters is set to move in this year. When Dave and Busters moves in, it will be the first in Coachella Valley. The new arcade will be at the previous location of the restaurant called Acqua Pazza. With over 20,000 square feet, there will be games, food, The post Dave & Busters coming to the River in 2023 appeared first on KESQ.
RANCHO MIRAGE, CA・4 DAYS AGO
KESQ News Channel 3

The Morongo Casino Resort & Spa in Cabazon will host two job recruitment fairs next month, seeking to fill 80 positions.    The first event is scheduled for Feb. 7, followed by an additional fair on Feb. 28. Both events are slated from 10 a.m. to noon in the resort's Marketplace food court. "Morongo's continued The post Morongo Casino plans job fairs in February appeared first on KESQ.
CABAZON, CA・1 DAY AGO
KESQ News Channel 3

College of the Desert is now providing free home internet to active students to complete their coursework and stay connected with COD while at home, according to the school's website. The internet service provider will coordinate a home visit where they will deliver and set up the modem needed to provide your household basic internet. Service The post College of the Desert launches free home internet service program for students appeared first on KESQ.
PALM DESERT, CA・2 DAYS AGO
KESQ News Channel 3

PSUSD is sponsoring students to go on college tours

Palm Springs Unified School District will sponsor 24 students on an H.S.I. (Hispanic Serving Institutions) tour in Austin, Texas, and 24 students attending the H.B.C.U. (Historically Black Colleges and Universities)tour to Washington, D.C.  Stephanie Cesena is an 11th-grader who wants to become a Psychiatrist. Her parents did not go to college, but her sister inspired The post PSUSD is sponsoring students to go on college tours appeared first on KESQ.
PALM SPRINGS, CA・2 DAYS AGO
KESQ News Channel 3

The issues along the U.S./Mexico Border have intensified, amid record encounters with migrants seeking asylum. Peter Daut takes an in-depth look at what this means for the Coachella Valley, and what's being done in response to the migrant influx. Daut traveled to the California Border city of Calexico, which recently declared a state of emergency The post News Channel 3 takes an in-depth look at the migrant influx appeared first on KESQ.
CALEXICO, CA・3 DAYS AGO
KESQ News Channel 3

The Indio Planning Commission unanimously approved a new affordable housing complex set to be on Avenue 44. Several residents were in attendance at Wednesday night’s meeting. Most of them were there for the proposed Avenue 44 Apartments. The 180-unit affordable housing complex would be built just off of Golf Center Parkway. It's a place that The post Avenue 44 apartments moving forward in Indio after residents voiced support, concerns appeared first on KESQ.
INDIO, CA・2 DAYS AGO
KESQ News Channel 3

There could soon be a break in the years-long battle between valley cannabis business owners and local leaders over hefty taxes they say are crippling small businesses. Cathedral City is tied with other west valley cities for the highest tax on retail cannabis businesses in the valley: a 10% tax tacked on top of the The post Cathedral City leaders support cutting cannabis tax in half appeared first on KESQ.
CATHEDRAL CITY, CA・2 DAYS AGO
KESQ News Channel 3

Traffic was briefly diverted in the area of Fred Waring Drive and Dune Palms Road in Bermuda Dunes Wednesday afternoon. The crash was reported just before 5:00 p.m. It appears that at least two vehicles were involved. There's no word on if there were any injuries. According to our crew at the scene, eastbound on The post Traffic temporarily impacted by crash on Fred Waring in Bermuda Dunes appeared first on KESQ.
BERMUDA DUNES, CA・2 DAYS AGO
KESQ News Channel 3

Indio Police Department recruiters participated this past week in the Winter Career Fair at California Polytechnic University San Luis Obispo. In IPD's Facebook post, it said the team highlighted what it is like to join their department such as offering their trainees over $30 per hour during the six-month police academy. The department also said they The post Indio Police Department participates in career fair at Cal Poly San Luis Obispo appeared first on KESQ.
INDIO, CA・6 DAYS AGO
KESQ News Channel 3

Riverside County Sheriff's deputies detained two children after reports of someone armed with a firearm inside the VIP Urgent Care building in Palm Desert. The building is located at 72630 Fred Waring Drive. Viewers called the newsroom reporting a heavy police presence in the area shortly after 5:15 p.m. A spokesperson for the Sheriff's Dept. The post Two children detained after reports of a firearm at VIP Urgent Care in Palm Desert appeared first on KESQ.
PALM DESERT, CA・17 HOURS AGO
KESQ News Channel 3

A San Pedro man pleaded guilty today to his involvement in an armed robbery last year at a Palm Desert jewelry store and was immediately sentenced to eight years and four months of state prison. Rayjon Thorton, 26, pleaded guilty Wednesday afternoon to one felony count each of robbery and being a convicted felon and The post Man sentenced for role in armed jewelry store robbery in Palm Desert appeared first on KESQ.
PALM DESERT, CA・2 DAYS AGO
KESQ News Channel 3

Gusty winds have continued to lift sand and dust into the air and create difficult driving condition on roads across the valley. Here is a view of the I-10 West Freeway where winds created brown out conditions this morning. There is currently one road closure in Thermal on Harrison St. between 77th Ave and Pierce The post Strong winds affect driving conditions across the valley appeared first on KESQ.
THERMAL, CA・4 DAYS AGO
KESQ News Channel 3

A firefighter is recovering following a house fire Friday night in Indian Wells. Cal Fire reported it broke out after 9:30 p.m. Friday off Hummingbird Lane. The two-story house was reportedly 4,000 square feet and 30% of it was on fire when emergency crews arrived. Firefighters from both Cathedral City and Palm Springs helped to The post Firefighter injured in Indian Wells house fire appeared first on KESQ.
INDIAN WELLS, CA・6 DAYS AGO
KESQ News Channel 3

The Palm Springs quadruple murder retrial for Jose Larin Garcia resumed Tuesday after a short delay. Larin Garcia is accused of murdering four people in Palm Springs in 2019. His first trial ended with a deadlocked jury. Judge Anthony Villalobos returned to the bench apologizing to the jury for a case of food poisoning that The post Palm Springs quadruple murder retrial returns to court Tuesday after judge was sick appeared first on KESQ.
PALM SPRINGS, CA・4 DAYS AGO
KESQ News Channel 3

Palm Springs Police Chief Andrew Mills shared a new plan he's calling to address homelessness in the city. Mills said it'll be compassionate but persistent enforcement of the law for people who act inappropriately in the community. "Operation Relentless Sun" is a 3-part plan.  The first step is counting and understanding the depth of the homeless problem. The second The post Palm Sprigs Police Chief shares new plan to address homelessness appeared first on KESQ.
PALM SPRINGS, CA・7 DAYS AGO