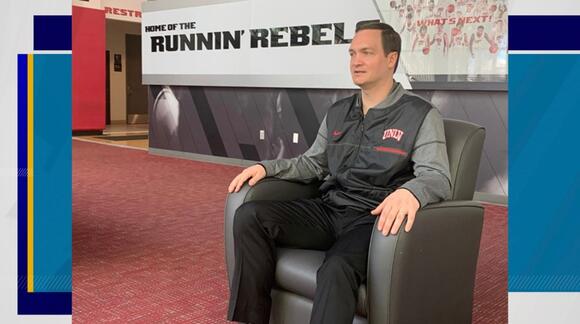 LAS VEGAS (KLAS) – Kevin Kruger had done just about everything possible at UNLV. As a player he led the Rebels to the Sweet 16 in 2007, he also was an assistant coach for a couple of season and now he has taken over the program that his father, Lon, used to coach. Kruger won his opener Wednesday night as the new Rebels head coach.

Bryce Hamilton had 22 points as UNLV got past Gardner-Webb 64-58 in a season opener. Royce Hamm Jr. had 18 points, 17 rebounds and four blocks for the Rebels. Donovan Williams added 10 points. Marvin Coleman had eight rebounds. Hamilton’s layup with 24 seconds left gave UNLV a two-possession lead and Mike Nuga sank two free throws with 9 seconds remaining to wrap up the win. D’Maurian Williams tied a career high with 21 points and had 10 rebounds for the Bulldogs.

Hey, NBA, did you know about Maxx Crosby’s basketball skills, specifically his dunks?

Two teams on the second game of a back to back clash Saturday night when the Golden Knights visit the New York Islanders.
ELMONT, NY・3 DAYS AGO
8 News Now

Rebels turn up defense to finish off intrastate rival Nevada-Reno

The UNLV defense that was such a force in the team's opening weeks showed up Saturday night.
LAS VEGAS, NV・2 DAYS AGO
8 News Now

Candace Parker, twice a winner of the WNBA championship and the MVP award, is signing with the Aces as a free agent, according to published reports.
LAS VEGAS, NV・3 DAYS AGO
The Comeback

After making the conference championship game for a second time in as many seasons, Cincinnati Bengals suffered a tough loss to the Kansas City Chiefs following a costly penalty in the final seconds of the game that set up a game-winning field goal for the Chiefs. It wasn’t the outcome the team had hoped for, Read more... The post Joe Burrow reacts to loss with bold message appeared first on The Comeback: Today’s Top Sports Stories & Reactions.
CINCINNATI, OH・2 DAYS AGO
8 News Now

Driver who killed 9 going 103 mph in Las Vegas-area crash was repeatedly stopped for speeding; on paper, he was a bad parker

The man who police said caused a crash that left nine people dead, including himself, had a history of speeding -- but those violations failed to show up on his driving record because they resulted in lesser parking citations and fines.
NORTH LAS VEGAS, NV・1 DAY AGO
8 News Now

The family of Rakiyah Poole, 24, spoke out exclusively to 8 News Now days after the young mother was killed in the northeast Las Vegas Valley after a hit-and-run crash.
LAS VEGAS, NV・1 DAY AGO
8 News Now

Snow flurries are reported in the southeast valley in neighborhoods near the base of Black Mountain and also around College Drive and U.S. 95.
LAS VEGAS, NV・1 DAY AGO
8 News Now

An attempted murder and kidnapping suspect whom police described as “extremely dangerous” previously served jail time in Las Vegas for holding a woman against her will for two weeks.
GRANTS PASS, OR・1 DAY AGO
8 News Now

Inmate at troubled prison outside Las Vegas dies by suicide

A woman accused of killing her mother, after previously telling police she was too “good looking” to be arrested, arrived back in Las Vegas over the weekend to face the murder charge filed against her, records showed.
LAS VEGAS, NV・1 DAY AGO
8 News Now

LAS VEGAS (KLAS) — Police were called to investigate a homicide in the downtown Las Vegas area on Tuesday night after a report that a woman had been shot. The incident occurred at 1000 block of South 3rd Street, near Charleston and Las Vegas boulevards. Police received a call from a man in his 20s […]
LAS VEGAS, NV・13 HOURS AGO
8 News Now

FBI searches for missing Las Vegas woman, case may have ties to Mexico

The FBI was searching Tuesday for a Las Vegas woman who last claimed that she was in Mexico.
LAS VEGAS, NV・16 HOURS AGO
8 News Now

MEMPHIS, Tenn. (WREG) — Memphis Police say officer Preston Hemphill has been relieved of duty for his involvement in the confrontation with Tyre Nichols. Hemphill, hired in 2018, is the sixth officer implicated in the fatal beating of Nichols. Five other officers were fired and have been charged with second-degree murder. According to MPD, Hemphill […]
MEMPHIS, TN・1 DAY AGO
8 News Now

Jaguar driver killed after crashing into light pole.Jaguar F-Pace was traveling eastbound on Charleston and veered to the right, left the road and struck a light pole and utility box.
LAS VEGAS, NV・1 DAY AGO
8 News Now

The United States is months away from being unable to pay military paychecks, government programs and the country's debt, but Republicans say before they agree to raising the country's debt limit, Democrats must agree to spending cuts.
WASHINGTON STATE・1 DAY AGO
8 News Now

Over half a pound of meth found during Mesquite traffic stop

Mesquite police made an arrest after they found over half a pound of methamphetamine during a traffic stop.
MESQUITE, NV・3 DAYS AGO