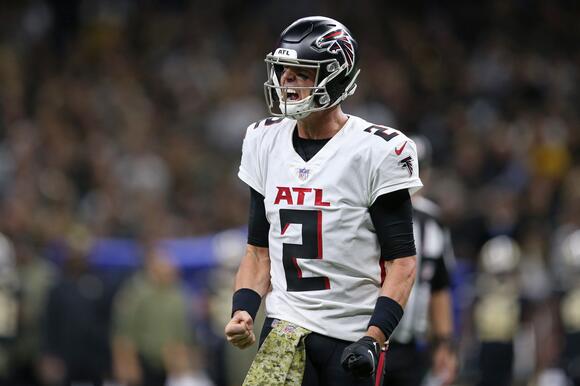 The Atlanta Falcons elected not to draft Matt Ryan's successor in a quarterback heavy 2021 NFL Draft class. But has Ryan proven them right in their decision-making?

Ryan started the season off slow in new head coach Arthur Smith's system but, since Week 3, has been one of the best and most efficient quarterbacks in the league right now.

In addition, when he's under pressure, Ryan is 93 of 112 passing for 645 yards, seven TDs, two INTs and a 96.4 passer rating. Only two other quarterbacks are more efficient than Ryan under pressure; Kyler Murray and Teddy Bridgewater.

Has Ryan solved the issues that general manager Terry Fontenot and coach Smith have at the Falcons QB situation moving forward--both when it comes to cap space and finding a successor?

"I don't want to say that he's earned the right to be the quarterback (moving forward), it just seems like he's showing them that he can still play at this high level and it's not the top priority," Randy McMichael said.

"They've got to find an heir apparent sooner than later...and sooner does not mean next season. But i gives you--as long as he keeps playing at this level--some more leeway as far as when you're going into the draft next year, where do you take a quarterback."

Ben Roethlisberger played what will likely be his final game in the NFL as the Steelers were blown out by the Kansas City Chiefs in the wildcard round. Ben’s final season should be a warning not only to the Atlanta Falcons but to the rest of the league. With...
NFL・1 DAY AGO
FanSided

Due to the Atlanta Falcons’ inability to build a defense or consistently protect Matt Ryan how great the quarterback has been, is often overlooked. The 2021 season encapsulates that sentiment perfectly when you look at what the Atlanta Falcons asked Ryan to do. Giving Ryan an offensive line unable...
NFL・1 DAY AGO
Sportsnaut

When modern football fans think of the Atlanta Falcons, quarterback Matt Ryan is likely one of the first names that
NFL・1 DAY AGO

A bidding war for him by AFC teams like the Patriots, Jets and Dolphins? That can help bump up the return on a trade. But …
NFL・2 DAYS AGO
Yardbarker

There are many positions the Falcons must improve at if they’re to truly maximize Matt Ryan‘s latter years. On the defensive side of the ball, Dean Pees could use an influx of talent at safety, cornerback, interior linemen, and edge defenders. Nearly the entire unit needs upgrading. On the offensive side, the offensive line and receiving core needs addressing.
NFL・1 DAY AGO
92.9 The Game

Tori McElhaney joined Chris and Harry to discuss the biggest areas of need going in to the 2022 NFL offseason. She says the Falcons have to fix the pass rush.
NFL・19 HOURS AGO
sportstalkatl.com

Can Falcons expect similar two-year improvement from Matt Ryan under Arthur Smith as he did with Kyle Shanahan?

Matt Ryan is coming off arguably the worst season of his career statistically. The veteran quarterback finished his first year under Arthur Smith completing 67% of his passes for 3,968 yards, 20 touchdowns and 12 interceptions. It was also arguably the worst supporting cast he’s had in his career with the Falcons.
NFL・1 DAY AGO

Even after Chris Mortenson essentially guaranteed that Matt Ryan would be under center for the Falcons in 2022, the speculation hasn’t ceased. I believe Mortenson’s assessment to be correct for several reasons, but Arthur Smith did say he didn’t want to back himself into a corner regarding Ryan. Intelligently, the Falcons are keeping their options open heading into the offseason. It might take an overpay, but there are several teams that are just a quarterback away from being a Super Bowl contender. If the right deal comes along, the Falcons would be fools not to consider it, at least.
NFL・1 DAY AGO
CBS Sports

Dallas Cowboys owner and de facto general manager Jerry Jones is frustrated with a whole lot of things after his team's disappointing opening-round playoff loss to the San Francisco 49ers. Among the things disappointing him at the moment is wide receiver Amari Cooper. "Amari Cooper should take half the field...
NFL・1 DAY AGO
Sportsnaut

The Minnesota Vikings are cleaning house this offseason, putting the future of quarterback Kirk Cousins in the spotlight. If the
NFL・1 DAY AGO
BuckeyesNow

The Pittsburgh Steelers will have a quarterback competition on their hands for the first time in nearly two decades, and head coach Mike Tomlin expects former Ohio State signal-caller Dwayne Haskins to battle Mason Rudolph this offseason for the right to be Ben Roethlisberger’s immediate successor. “Both guys have...
NFL・19 HOURS AGO

On Friday night, five-star quarterback recruit Arch Manning had the best college football coach in the country – and his top assistants – at his high school basketball game. Manning, the No. 1 quarterback recruit in the 2023 class, is also a star on the hardwood. Alabama coach...
COLLEGE SPORTS・18 HOURS AGO
Sports Illustrated

The virus caused a shift in the broadcast pairing for the network during this weekend's divisional round game.
NFL・1 DAY AGO
Sportsnaut

Aaron Rodgers and the Green Bay Packers entered the playoffs as the strong favorite to win the Super Bowl. But
NFL・8 HOURS AGO
Insider

Just eight teams remain in the fight for Super Bowl LVI. This week, we're backing the Packers and Chiefs to cover the spread.
NFL・2 DAYS AGO
ClutchPoints

The Green Bay Packers lost in absolutely brutal fashion, immediately shifting their attention from chasing a Super Bowl title to trying to keep quarterback Aaron Rodgers. The game-shifting moment of the evening was a special teams play where nobody expected any fireworks to happen. Up one touchdown and punting from their own end zone, the Packers botched a routine punt that was deflected and returned for a touchdown by the San Francisco 49ers defense.
NFL・8 HOURS AGO
Audacy

The longtime NFL reporter joined Bull & Fox on 92.3 The Fan on Thursday to discuss the league’s coaching and QB carousels, which are already gaining steam long before the conclusion of the playoffs.
NFL・1 DAY AGO
Sportsnaut

Nick Saban ditching the NFL for Alabama makes for one an epic "what if?" scenario in coaching history. Let's look back at why Saban left the Miami Dolphins.
NFL・1 DAY AGO