How Much Is Leonardo DiCaprio Worth? 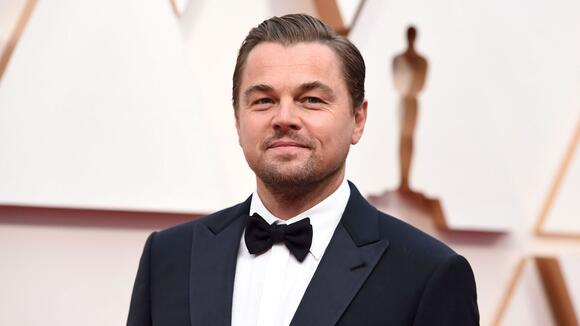 Leonardo DiCaprio has been a household name since 1996. This American actor, producer, philanthropist and environmental activist continues to delight and surprise audiences by taking on different roles across many genres.

His career has flourished well beyond his star-making turn as Jack Dawson in 1997’s “Titanic” and he is fearless in his choice of projects he takes part in.

See: 45 Richest Child Stars of All Time
Find: 30 Celebrities Who Went From Rags to Riches

DiCaprio starred in “What’s Eating Gilbert Grape,” “The Quick and the Dead,” “The Basketball Diaries,”  “Baz Luhrmann’s Romeo + Juliet,” “The Man in the Iron Mask,” “Catch Me If You Can,” Gangs of New York,” “The Aviator,” “The Departed,” “Shutter Island,” “Christopher Nolan’s Inception,” “Django Unchained, “The Great Gatsby,” “J. Edgar,” “The Wolf of Wall Street,” “The Revenant,” and “Once Upon a Time in Hollywood.”

His upcoming Netflix comedy, “Don’t Look Up,” co-starring Jennifer Lawrence, will be released on Dec. 10 and already earned him $30 million. That is $10 million more than he usually takes in.  His net worth is $260 million, according to Celebrity Net Worth.

In the years 1995 through 2020, he earned more than $300 million from base salaries alone, not to mention $100 from endorsement deals. He invested in vegan “meat” company Beyond Meat which went public in 2019 and was valued at $4 billion.

In addition to being successful in the box office, he has received much critical acclaim.  He won an Academy Award, a Screen Actors Guild Award, three Golden Globe Awards and has been nominated for numerous other awards.

He has used his celebrity status to support many charities, with a passion for environmental issues. He founded the non-profit Leonardo DiCaprio Foundation in 1998 specifically to help with causes related to the environment. He personally donated $1 million each to Haitian earthquake relief and Hurricane Harvey relief. He has donated or helped raise more than $80 million for charitable pursuits throughout his career.

Leonardo Wilhelm DiCaprio was born to Irmelin and George DiCaprio on Nov. 11, 1974, in Los Angeles, Calif. Though his parents split when he was a year old, and he lived primarily with his mother, he remained close with both parents. He claims his earliest passions were marine biology and acting.

DiCaprio’s performance skills were evident from his youth. His parents found a talent agent for him, but in the beginning, he was turned down repeatedly at auditions. He eventually landed commercials for Mattel, Kraft Foods, Bubble Yum and Apple Jacks while still a child.

His first major role came when he joined the cast of “Growing Pains” as orphan Luke Brower in 1990.  He followed that role by appearing as Robert De Niro’s stepson in “This Boy’s Life” in 1993. That same year, he garnered even more favor with critics by starring as a mentally disabled teenager in “What’s Eating Gilbert Grape.”

In 1997, James Cameron selected him to star in “Titanic.” His backend deal yielded him $40 million from that film alone and the film itself grossed $3 billion globally.

After the success of the romantic classic, he took a variety of roles that kept him in the limelight. He is known for negotiating good backend deals and will take an upfront pay cut, as he did in “Once Upon a Time in Hollywood” so he could star alongside Brad Pitt.

Discover: Who’s Richer? Taylor Swift, Jennifer Aniston Or One Of These Other Big-Name Celebrities?

While DiCaprio has had some public romances with supermodels Gisele Bündchen and Bar Refaeli, he remains unmarried.  He has been with Argentine-American actor/model Camila Morrone since 2017.

Real estate is a passion for DiCaprio. He owns an estimated $100 million in property across the world.  He even owns a private island, Blackadore Caye, in Belize, for which he paid $1.75 million in 2005 and plans to develop it into a private resort in the future. He also purchased undeveloped land in Malibu for $23 million in 2017.

His first real estate purchases included two neighboring homes, one previously owned by Madonna, located in the Los Feliz part of Los Angeles that he paid $4 million for in 1994.

DiCaprio also owns multiple homes in the Los Angeles area. Three in Malibu, two in Silver Lake and two in the Hollywood Hills. He does not flip these properties, however. Instead, he keeps them and rents them out when not in use.

The actor’s East Coast real estate includes an apartment in NYC’s Battery Park neighborhood that he paid $3.67 million for in 2008.

In 2014, he purchased a 3,663 square foot condo for $10 million in Greenwich Village. He ended up selling that property at a $2 million loss in 2016 but maintains two other apartments in New York City.

Then, in the fall of 2021, he acquired another Malibu mansion that overlooks the ocean for $14 million.

See: The Richest of the Rich: See How Much Tom Hanks and More A-List Movie Stars Are Worth
Find: How Rich Are Tom Hanks, Renée Zellweger and More Past Oscar Winners?

DiCaprio will be seen in the Netflix film “Don’t Look Up” in December and has four more projects in various stages of development already in the works.

This article originally appeared on GOBankingRates.com : How Much Is Leonardo DiCaprio Worth?

Investors Bank Review: Competitive Rates and Lots of Accounts To Choose From

As a community financial institution, Investors Bank maintains a narrow focus on the New Jersey, Pennsylvania and New York customers it serves. The bank offers a solid range of checking and savings accounts, competitive rates and the convenience of banking in person or online. This Investors Bank review guides you through the institution's offerings.
PERSONAL FINANCE・43 MINUTES AGO
GOBankingRates

The Dollar-and-a-Quarter Tree apparently is not going over well with certain consumers who are used to whipping out a $1 bill and not a penny more. Many are taking to social media to complain about...
BUSINESS・7 HOURS AGO
GOBankingRates

Cathay Bank offers a full suite of personal checking and savings products, along with mortgage loans, credit cards and investment products. First opened to serve the Chinese American community in the Los Angeles area, the bank has expanded to several other areas in the country that also have large Asian American populations. The website and customer service are offered in English, Chinese and Spanish.
LOS ANGELES, CA・5 HOURS AGO
GOBankingRates

It's hard to go wrong with Amboy Direct Bank, especially if you're a New Jersey resident. Rates are competitive, fees nonexistent, and it's easy to transfer money between Amber Direct and your existing checking account.
PERSONAL FINANCE・5 HOURS AGO

Redwood Credit Union offers a full lineup of banking products and services, including a wide range of checking accounts designed for different financial needs and age groups. You won't find ultra-high annual percentage yields like you might elsewhere, but Redwood's APYs are decent, and its product variety and community-oriented service make it a good choice for those who live in its service area.
SAN FRANCISCO, CA・4 HOURS AGO
GOBankingRates

Hudson Valley Credit Union offers a wide range of flexible banking products for its members. Plus, there are no monthly fees and very few requirements to open and maintain your accounts.
CREDITS & LOANS・6 HOURS AGO
GOBankingRates

Marcus by Goldman Sachs offers accounts designed to help customers make the most of their money. Its product line is limited to savings and loan services, but the narrow focus lets it concentrate on giving customers what they need and want.
PERSONAL FINANCE・1 HOUR AGO
GOBankingRates

FirstBank Review: Regional Bank With an Account for Everybody

Kinecta Federal Credit Union is geared toward customers who live in Southern California, though it also offers membership to residents of Texas, New York and a few other states. It offers a standard lineup of bank accounts, along with loans, credit cards, investment products and business accounts.
MANHATTAN BEACH, CA・7 HOURS AGO
GOBankingRates

California's SchoolsFirst Federal Credit Union has few weaknesses and plenty of strengths, including competitive yields on its bank accounts and a strong product lineup.
SANTA ANA, CA・6 HOURS AGO
GOBankingRates

Chase Bank Review: Thousands of Branches and a Host of Products and Services

With 4,700 branches and 16,000 ATMs, Chase is best for those who do their banking the traditional way -- in person at their local branch and at ATMs.
PERSONAL FINANCE・4 HOURS AGO
GOBankingRates

Star One Credit Union offers the best of both worlds: a nationwide network of branch locations and ATMs, plus excellent online banking options. And, as a credit union, Star One keeps its rates competitive and its fees low.
PALO ALTO, CA・3 HOURS AGO

BMO Harris Bank Review: The Products You Need With a Solid Mobile and Digital Experience

BMO Harris Bank is a great choice for customers who want a straightforward approach to banking, a solid selection of products and a customer-favorite mobile app.
CHICAGO, IL・6 HOURS AGO
GOBankingRates

How To Beat Inflation at Costco and Other Grocery Stores

It pays to save at CIT Bank. This online-only bank offers above-average interest rates on its selection of deposit accounts and certificates of deposit. When you commit to saving and make it a habit, you get access to the bank's best rates.
PASADENA, CA・6 HOURS AGO
GOBankingRates

Valley National Bank is best for people who want to have all of their accounts at a single institution, as the bank offers products for a wide range of needs.
PERSONAL FINANCE・7 HOURS AGO
GOBankingRates

Current is a financial technology company that provides banking services (through Choice Financial Group). As such, their checking account features are designed with the tech-savvy consumer in mind, including no fees or minimums. Current is online only, with no physical branch locations. They offer a basic checking account, a premium checking account and teen checking.
TECHNOLOGY・6 HOURS AGO
GOBankingRates

Teachers Federal Credit Union offers a wide range of basic account types and broad access to its services, but it's not for those looking for top-tier yields.
EDUCATION・7 HOURS AGO
GOBankingRates

Most Americans Waste $100 a Year on Bank Fees: How To Avoid This Costly Mistake

Most people open bank accounts to manage their money and build savings. Bank fees make both of those goals more difficult. Americans pay an average of $7.69 per month in fees, according to Statista,...
CREDITS & LOANS・5 HOURS AGO