Biden undermines his own administration by expressing shock at gas prices: ‘Did you ever think you’d pay so much?’ 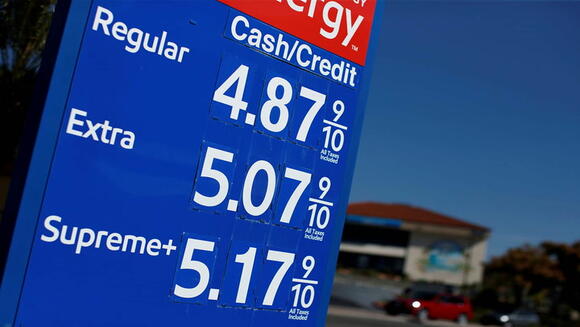 US president Joe Biden on Wednesday appeared to undermine his own administration as he expressed shock over rising gas prices and conceded that inflation was the highest in three decades.

“Did you ever think you’d be paying this much for a gallon of gas? In some parts of California, they’re paying $4.50 a gallon. That’s why it’s so important we do everything in our power to stabilise the supply chain ,” he added.

He unexpectedly advanced the stance of his critics and opposition who have been lambasting his administration over inflation.

The president’s remarks came during his trip to Baltimore’s port over a $1.2 trillion bipartisan infrastructure bill that was passed in Congress on Friday. Mr Biden is expected to sign it on Monday.

He used his comments to assure Americans that he is concerned about the rising cost and said  “many people remain unsettled about the economy.”

“Everything from a gallon of gas to a loaf of bread costs more, and it’s worrisome even though wages are going up,” he said. “We still face challenges, and we have to tackle them.”

The president attributed the inflation to global supply chain problems, Covid restrictions and even economic recovery.

“On the one hand, we’re facing new disruptions to our supplies. At the same time, we’re also experiencing higher demand for goods because wages are up as well as people have money in the bank. And because of the strength of our economic recovery, American families have been able to buy more products,” he said.

He said people have stopped going out for lunch and dinner, instead, they are staying at home and ordering online.

“Well with more people with money buying product and less product to buy, what happens? The supply chain’s the reason, the answer is you guys, I’ll get to that in a minute. But what happens? Prices go up,” he said.

Republicans have used the issue of inflation to attack Biden administration’s economic agenda and it will potentially be used as a top concern in polling in next year’s midterm election.

Republican representative Byron Donalds said in a tweet: “Last year, the average price of fuel in FL was $2.005. Today, under the Biden-Harris admin, the average cost is $3.281. The last time Floridians saw gas prices this high was in 2008 when Biden was VP.  It seems like when Biden is in power, Americans pay more at the pump.”

When President Joe Biden named Kamala Harris as his running mate, he promised his former campaign rival would be one of the most influential voices in the White House.
PRESIDENTIAL ELECTION・23 DAYS AGO
USA TODAY

The Centers for Disease Control and Protection announced in April that the Title 42 would be rescinded on May 23.
LOUISIANA STATE・24 DAYS AGO
Business Insider

Greene testified on Friday that she didn't recall whether she asked Trump to invoke military rule, despite telling Meadows to relay the idea to Trump.
ATLANTA, GA・24 DAYS AGO
Newsweek

With a key Senate primary still in the balance, Donald Trump is again casting doubt on election integrity without offering any evidence.
PENNSYLVANIA STATE・1 DAY AGO

MILLIONS of Americans are set to receive Social Security checks worth up to $1,657 tomorrow. The cash boost will come just 48 hours before Supplemental Security Income payments, worth up to $841, are set to land in around eight million bank accounts on April 29. Seniors with birthdays on the...
BUSINESS・23 DAYS AGO
The Independent

Vladimir Putin is so popular in Russia that he has the “political space” to withdraw his forces from Ukraine, said Boris Johnson.The prime minister said the Russian president still has “massive backing” from his own people despite international outrage over the invasion.“The Russian public overwhelming back Putin,” Mr Johnson told Talk TV. “Therefore he has the political margin for manoeuvre from within Russia … Putin has far more political space to back down, to withdraw.”The PM added: “There could come a point when he could say to the Russian people, ‘The military-technical operation that we launched in Ukraine has...
POLITICS・22 DAYS AGO
FOXBusiness

Tesla CEO Elon Musk said this week that the U.S. must "stop the infighting" in order to be competitive with China, warning that the world's second-largest economy will someday dwarf America's output. "What we’re going to see with China, for the first time that anyone can remember who is alive,...
ECONOMY・2 DAYS AGO
Business Insider

"The West made the fatal mistake of becoming reliant on Russian energy supplies," Mikhail Khodorkovsky said. "The West has to pay for its mistakes."
ENERGY INDUSTRY・24 DAYS AGO

The former president referenced scoring well on a cognitive test in 2018, which is designed to detect whether a person has early stages of dementia.
DELAWARE COUNTY, OH・25 DAYS AGO
MSNBC

A new Republican-backed law in Florida will repeal Disney’s special tax status, resulting in a property tax increase of up to 25% for residents of Orange County. MSNBC’s Lawrence O’Donnell explains how the move comes as GOP retribution for Disney’s opposition to Florida’s “Don’t Say Gay” bill.April 26, 2022.
FLORIDA STATE・23 DAYS AGO

Colorado Governor Jared Polis cited the "impacts of inflation and the cost of living" as reasons for the tax rebate program.
COLORADO STATE・24 DAYS AGO
The Independent

Defeated Pennsylvania Senate candidate Kathy Barnette has placed blame for her third-place finish in Tuesday’s Republican primary squarely on the shoulders of Fox News host Sean Hannity. In a video posted to her Twitter account early on Wednesday morning, Ms Barnette thanked her supporters, but pivoted to attacking the Fox commentator.“I do want to say: never forget what Sean Hannity did in this race. Almost single-handedly, Sean Hannity sowed seeds of disinformation, flat-out lies every night for the past five days. And that was just extremely hard to overcome, apparently”.Ms Barnette’s grievance with Hannity stems from his decision to...
PENNSYLVANIA STATE・1 DAY AGO
Business Insider

The Kremlin has refused to acknowledge its death toll in Ukraine, though a spokesperson admitted that Russia suffered "significant losses."
MILITARY・24 DAYS AGO

An attorney for the campaign said they thought they were allowed to use the funds based on a "good faith" understanding of the "highly confusing" rules.
FLORIDA STATE・1 DAY AGO
The Independent

Nancy Pelosi sharply rebuked her Republican rivals on Thursday at her weekly press conference and challenged Republicans to a national debate over the issue of providing funding to address a critical shortage of baby formula.Speaking to reporters, she questioned why Republicans opposed a funding bill passed by the House this week that would provide $28m to address the shortage and give the Food and Drug Administration (FDA) resources to try and prevent future issues in the market.“What's the objection? That we don't want to spend money on babies who are crying for food? Ok, let's have that debate,” she...
CONGRESS & COURTS・4 HOURS AGO
Business Insider

The FBI also seized financial records and fine art in the October 2021 raids on properties linked to billionaire Oleg Deripaska, per Bloomberg.
WASHINGTON, DC・23 DAYS AGO