Marvin Bagley refused to check into game on Sunday

Sean Cunningham: Multiple sources told me that Marvin Bagley III refused to check into Sunday’s game when Luke Walton called upon him in the second half vs. the Suns. I didn’t report it, wanting to first talk to the Kings coach. Walton said he & Marvin are in communication and has to be ready pic.twitter.com/m3E6JxaeVk

During the Kings-Suns contest on Sunday, Marvin Bagley III reportedly refused to check into the game when asked by head coach Luke Walton.

Kings trail the Spurs 71-54 at the half. The Spurs are shooting 55.1% from the field and 57.9% from 3-point range. Kings coach Luke Walton has gone deep into his bench in search of answers, using everybody but Marvin Bagley III. – 9:39 PM

Luke Walton’s response to whether Marvin Bagley refused to go into a recent game: pic.twitter.com/MP7M4huef3 – 8:33 PM 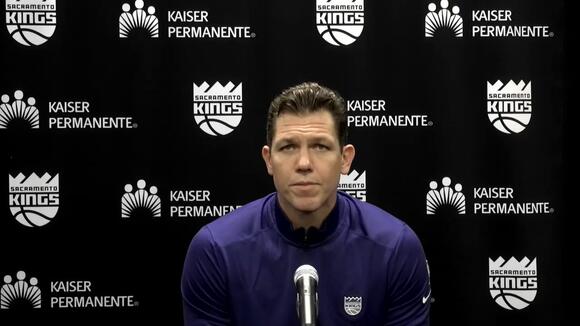 Multiple sources told me that Marvin Bagley III refused to check into Sunday’s game when Luke Walton called upon him in the second half vs. the Suns.

I didn’t report it, wanting to first talk to the Kings coach.

Walton said he & Marvin are in communication and has to be ready pic.twitter.com/m3E6JxaeVk – 7:07 PM 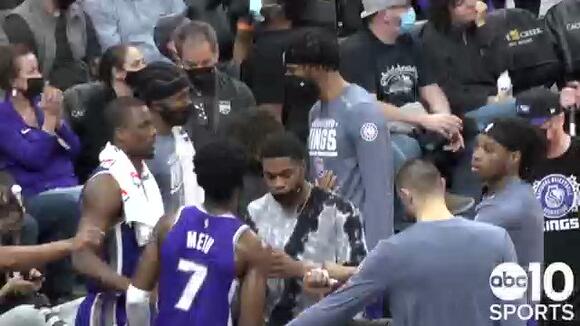 Kings giving away Marvin Bagley jerseys during the timeout. – 11:28 PM

With Kings not having Haliburton and scraping rotation barrel, they turn to Chimezie Metu for some backup forward minutes … not Marvin Bagley. – 10:56 PM

James Ham: Luke Walton was asked twice whether or not Marvin Bagley refused to go into Monday’s loss to the Suns. Walton wouldn’t discuss. He said the team keeps conversations like that in house. -via Twitter @James_HamNBA / November 10, 2021

Jason Anderson: Kings coach Luke Walton when asked if Marvin Bagley III refused to enter Monday’s game against the Suns: “Anything that happens within our group, that’s between our group, so the thing that matter is people know what’s expected and we continue to move forward tonight.” -via Twitter @JandersonSacBee / November 10, 2021

Jason Anderson: Luke Walton on Marvin Bagley III’s chances of getting into the rotation at some point: “The chances are great. Everyone on our team is going to get opportunities this year. We’re going to need everybody. Every practice we’ve had, including the one yesterday, is high energy.” -via Twitter @JandersonSacBee / November 2, 2021

inmates running the asylum..and will continue as long as the owners put Gazillion percent profit over right and wrong...I quit watching woke sports like basketball..

if I refused to work I would be fired. hes no different than anyone else. just because he can dribble a ball means nothing but ownership doesn't have the balls to let him go at least suspend him

The Phoenix Suns are steamrolling the NBA once again. They became the first team to win 30 games this season due to their elite offense and even better defense. It’s not a matter of if, but who on Phoenix’s roster gets named an All-Star. Devin Booker has been...
PHOENIX, AZ・18 DAYS AGO
FastBreak on FanNation

The Utah Jazz are in Arizona to play the Phoenix Suns on Monday night.
NBA・1 DAY AGO
Sportsnaut

Andre Iguodala has been ruled out for Sunday's game between the Utah Jazz and Golden State Warriors.
NBA・2 DAYS AGO

Joe Ingles has been ruled out for Monday's game between the Utah Jazz and Phoenix Suns.
NBA・1 DAY AGO
Sportsnaut

The Utah Jazz were in a good mood after playing the Phoenix Suns on Monday, considering they’d just lost for
NBA・6 HOURS AGO
FastBreak on FanNation

Ben Stinar and Haley Jordan sat down to talk about the Phoenix Suns in the latest episode of Stinar For 3.
NBA・6 HOURS AGO
Sportsnaut

The 2021-’22 NBA season is proving to be a massive disappointment for the Los Angeles Lakers. Between the Anthony Davis
NBA・19 HOURS AGO

Bucks guard Grayson Allen addressed the Flagrant 2 foul he committed on Chicago Bulls guard Alex Caruso with a string of messages in his Discord server Saturday afternoon. "It was very unfortunate how it played out," Allen wrote. "I jumped to block it with my left and as I'm spinning went to grab the ball with my right hand not throw him down. It was a really hard fall and I'm glad he's okay. If I could do the play over again knowing he'd fall like that I wouldn't make the play."
NBA・2 DAYS AGO
Sportsnaut

With the 2021-22 NBA season in full swing, basketball fans are putting on their jerseys and filling up arenas around
NBA・2 DAYS AGO
FastBreak on FanNation

Patrick Beverley has been ruled out for Sunday night's game between the Brooklyn Nets and Minnesota Timberwolves.
NBA・2 DAYS AGO

Shaquille O'Neal Says He'd Call Out Magic Johnson If He Criticized His Lakers: "I'd Say, 'If Magic Got Something To Say, Well, Then He Has To Come Over And Say It To Us, To My Face.'"

The 2021/22 NBA season has everybody in the Lakers Nation trying to find solutions to a situation that seemingly doesn't have any. Fans, analysts, former and current players have had something to say about the Purple and Gold, but nobody has actually offered the solution to this. Magic Johnson, James...
NBA・2 DAYS AGO
FastBreak on FanNation

Jordan Poole had an incredible move on Jordan Clarkson in the game between the Utah Jazz and Golden State Warriors.
NBA・2 DAYS AGO
fadeawayworld.net

Vince Carter was a superstar, one of the most entertaining players to ever enter the NBA. His highlight-reel dunks and explosive scoring made him must-watch TV, especially in his early years with the Toronto Raptors. However, another thing that made Carter so impressive was his longevity, he made a league appearance in 4 different decades.
NBA・1 DAY AGO
All Hawks

Only realistic Russell Westbrook trade is to Rockets for John Wall?

Marc Spears: “I was told that they have a couple on the table, several on the table, but the only one that’s really has some, you know, realistic potential to it is with the Lakers for Russ. They actually make, I don’t know if it’s nearly to the same dollar, but a similar salary, so you can trade them one-for-one without including anybody else. That 2027 Laker pick that you mentioned before, that first-round pick, seems to be pretty coveted, and I would expect it to be included in such a deal. But John’s in Miami. He’s been working out. He actually asked the Rockets for permission to be in Miami so he could be near his kids and focus on working out.”
NBA・11 HOURS AGO
The Spun

Will John Wall be moved ahead of the NBA’s trade deadline next month?. According to a report from The Athletic, multiple teams are monitoring the Houston Rockets situation ahead of the trade deadline. Wall, a five-time NBA All-Star in Washington, has not been playing in Houston this season. He’s...
NBA・1 DAY AGO
670 The Score

In perhaps the strongest public comments yet from anyone in an angry Bulls organization, center Nikola Vucevic on Sunday called out Milwaukee Bucks guard Grayson Allen for his flagrant-2 foul on Chicago guard Alex Caruso on Friday.
NBA・2 DAYS AGO
Sportsnaut

The NBA trade deadline is drawing closer and the Philadelphia 76ers are reportedly no closer to a Ben Simmons trade,
NBA・1 DAY AGO