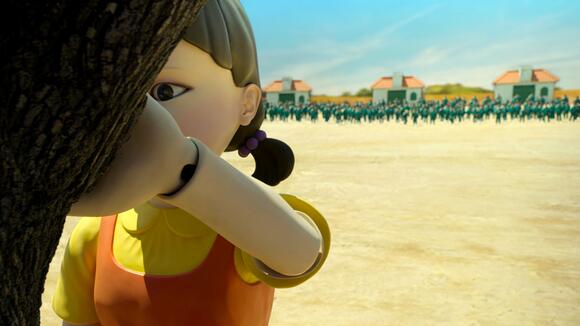 The addictive series “ Squid Game ” continues to saturate global culture and streaming charts, and YouTube is no exception.

As of Wednesday, the Netflix original has eclipsed HBO’s juggernaut “ Game of Thrones ” on the platform to earn 17 billion views across a spectrum of long and short form videos, a new report from content analytics firm Vobile says.

The staggering viewership comes from numerous types of video content, including official trailers and clips from the series, fan recreations of iconic moments, real-world challenges inspired by the plot and even narration of user-generated video games based on the property (found on services like Roblox).

“In ten years looking at YouTube, we’ve never seen anything quite like this,” Jared Naylor, vice president of audience development at Vobile, told Variety . The company identifies and analyzes how intellectual property is shared and co-opted in the digital space. Clients include ViacomCBS, NBCUniversal and Lionsgate.

Vobile estimates that the 17 billion views have come from 129,000 uploaded videos, including traditional longform YouTube clips and their recently-launched TikTok competitor YouTube Shorts. Those videos also count 533 million engagements (likes, dislikes and comments). This sits in comparison to “Game of Thrones,” which had a decade to amass its fan army as opposed to the roughly eight weeks “Squid Game” has been in play.  “Thrones” has 16.9 billion views from 420,000 uploaded videos, and an estimated 233 million engagements.

Some of the most successful clips are surprisingly simple, like the animated “ Pro Squid Game Players Be Like ,” which imagines skilled players breezing through the show’s challenges. That’s got 94 million views as of Wednesday. Clips like these are much more celebratory than the actual content of “Squid Game,” where destitute citizens play schoolyard games for a huge cash prize at the risk of brutal death.

Hwang Dong-hyuk, the creator of “Squid Game,” confirmed on Tuesday that season two is in development at Netflix. 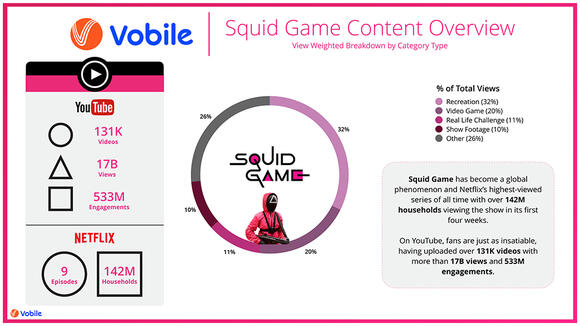 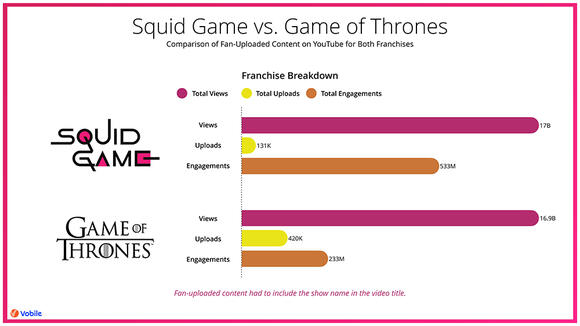 New York-based streaming network FilmRise has acquired the FAST (free ad-supported streaming) rights to Canadian comedy series “Kim’s Convenience,” following an agreement with Canadian production company Thunderbird Entertainment, FilmRise announced on Wednesday.  The show’s five seasons, which are currently available by subscription VOD on Netflix, will have their own dedicated channel in addition to populating on some of the platform’s other channels globally. FilmRise plans to offer the show to FAST channels on IMDb TV, Pluto, The Roku Channel, Samsung TV+, the FilmRise Streaming Network and others. Based on Ins Choi’s award-winning play of the same name, “Kim’s Convenience” tells the story...
TV SERIES・2 DAYS AGO
Variety

Godzilla and the Titans Live-Action Series Set at Apple

Apple has ordered a live-action Godzilla series from Legendary Television, Variety has learned. The untitled series continues the story of the Legendary Monsterverse established in films like “Kong: Skull Island” and 2014’s “Godzilla.” Following the battle between Godzilla and the Titans that leveled San Francisco and the shocking new reality that monsters are real, the series explores one family’s journey to uncover its buried secrets and a legacy linking them to the secret organization known as Monarch. Monarch is a secret government entity that has played a major role in the Monsterverse franchise, working to cover up the existence of and defend...
TV SERIES・1 DAY AGO
Variety

After almost two years of movie theaters being partially or completely closed, streaming services are poised to have their biggest moment yet. The 2022 Sundance film festival is one of the first major festivals where a steadily-growing number of services can test their muscle, and their money, not just against standard bearers of distribution but against tradition distribution methods themselves. “Everyone has gotten incredibly used to the idea of watching movies that are first-run on streaming without any kind of stigma,” Picturestart founder and CEO Erik Feig says. “Now it’s all about different forms of distribution as they ultimately make sense...
TV & VIDEOS・2 DAYS AGO
WATE

In less than five years, the children's song has become the most viewed video.
BEHIND VIRAL VIDEOS・6 DAYS AGO

Judy Justice, the recently launched IMDb TV series starring Judge Judy Sheindlin, will return January 24 with new weekday episodes. In addition to announcing the date, Amazon-owned IMDb TV also said it is launching a 24-7 streaming channel dedicated to the show, enabling viewers to dip into it anytime. Sheindlin embarked on a new career chapter last November with Amazon after a 25-year relationship with CBS Media Ventures came to a disharmonious end. (In an interview last June with The Wall Street Journal, Sheindlin said what had been a “nice marriage” was headed toward a “Bill and Melinda Gates divorce.”) The new...
TV SERIES・1 DAY AGO
allkpop.com

BLACKPINK's Lisa scored another impressive YouTube feat with 'MONEY'!. On January 10 at approximately 3:35 p.m. KST, Lisa's 'MONEY' Exclusive Performance Video has officially surpassed over 400 million views on YouTube, doing so in just 108 days after its release. 'MONEY' Exclusive Performance Video becomes the fastest video by a...
BEHIND VIRAL VIDEOS・12 DAYS AGO
The Hollywood Reporter

The finale of Hawkeye on Disney+ helped drive the show’s biggest viewing tally in the week of Dec. 20-26. Netflix’s The Witcher, meanwhile, grew in the week after its second season premiered and remained far and away the most watched title in Nielsen’s streaming rankings. Hawkeye recorded 938 million minutes of viewing time during Christmas week, the best tally of its run on Disney+ — beating out the 853 million minutes for its two-episode premiere a month earlier. It was up about 62 percent from the previous week and tied for second place among original series with Emily in Paris, whose...
TV SERIES・1 DAY AGO
Insider

Our video production team is growing and we’re looking for an engaging content creator to join us in a Trainee role, supporting our stations’ digital properties and YouTube channels. What you will do. Manage and grow YouTube channels for six stations and Graham franchises. Focus on driving audience...
JOBS・11 DAYS AGO
Fox 13 Now - Salt Lake City

The viral children's song and dance video "Baby Shark" has incredibly made YouTube history becoming the first video on the platform to reach 10 billion views. As Billboard pointed out, the space between it and the number two most-viewed video on YouTube, the very different music video "Despacito," by Luis Fonsi, featuring Daddy Yankee, has increased even more.
BEHIND VIRAL VIDEOS・8 DAYS AGO
dailytechnewsshow.com

Intel has selected a 1000-acre site in New Albany Ohio for its third US chipmaking location. Netflix reported it added 8.28 million net subscribers worldwide in Q4 for a total of 221.8 million. What does it say about the company’s direction and more broadly about the streaming market?. Starring...
NEW ALBANY, OH・19 HOURS AGO
Deadline

EXCLUSIVE: Lucifer, a drama that debuted on the Fox broadcast network before becoming a Netflix show in 2018, topped Nielsen’s list of the most-streamed original series of 2021 in the U.S. (See the full charts below, with the top 15 original, acquired and movie titles.) The 93 total episodes of the series netted more than 18.3 billion minutes of streaming during the year, according to the measurement firm’s year-end report. That put it well in front of Squid Game‘s 16.4 billion, but the Korean phenomenon had only nine episodes on Netflix in 2021. Roughly 15% of viewership was tallied by U.S....
TV SERIES・1 DAY AGO
The Independent

Ye has shared a message to the creators of a new Netflix documentary about his life, demanding he be given control over the final edit. The “Famous” rapper is the subject of the three-part series titled Jeen-Yuhs: A Kanye Trilogy, from filmmakers Clarence “Coodie” Simmons and Chike Ozah. The duo are behind West’s music videos including “Jesus Walks” and “Through the Wire”.On Friday 21 January, the artist formerly known as Kanye West posted from his official Instagram, writing: “I’m going to say this kindly for the last time. I must get final edit and approval on this doc before...
CELEBRITIES・1 DAY AGO
Variety

Netflix co-CEO and chief content officer Ted Sarandos proudly said “Stranger Things” is “as valuable a franchise as exists today in entertainment around the world” during the company’s Q4 earnings presentation Thursday. During the same pre-recorded Q&A, Netflix COO and chief product officer Greg Peters said while the streamer is very focused on its own titles, it’s still looking outside Netflix IP when it comes to building out a very young video games business. “It was exciting to see the activity in the space and I think, to some degree, it’s an endorsement of the core thesis that we have around...
BUSINESS・1 DAY AGO
Variety

Icelandic international star Aníta Breim (“The Tudors,” “The Minister,” “Journey to the Center of the Earth”) is making her debut as a creator and writer with the drama series “As Long as We Live” turning on love, lust and longing. Now in development, the six-part series, which is produced by Glassriver for Iceland’s Channel 2, has just been picked up for global distribution by Eccho Rights. Writer-creator Briem and producer Hörður Rúnarsson will be pitching the show in-person at the Göteborg Film Festival’s TV Drama Vision confab, which runs Feb 2-3. Briem will be toplining the show as Beta, a former queen of...
TV SERIES・1 DAY AGO
Variety

On Jan. 28 Netflix will drop its next big Spanish drama series, “Feria: The Darkest Light,” a new ‘90s-set fantastic thriller from “Elíte” co-creator Carlos Montero and thriller expert Agustín Martínez (“La caza: Monteperdido”). Produced by Filmax, one of Spain’s leading production, distribution and sales outfits, the show is a clear demonstration of Netflix’s ever-increasing ingratiation into the local industry and the company’s desire to work with the best local talent. Award-winning Spanish directors Jorge Dorado (“Anna”) and Carles Torrens (“Sequence”) were recruited to head production, and the series stars an impressive cast of cinema talent and TV superstars including Marta...
TV SERIES・1 DAY AGO
The Independent

You might think you’ve exhausted everything there is to watch on Netflix.The chances are, though, that there are probably a large quantity of films and TV shows you’ve never come across while searching through the streaming service’s extensive library.Unless you spend hours scrolling through, the titles that are highlighted are based on the previous things you’ve watched or added to your list.But, if you fancy watching something from a genre that isn’t available on Netflix’s limited selection, you won’t be able to find what you’re looking for with much ease.It turns out there are actually thousands of codes that...
TV SHOWS・7 HOURS AGO
Variety

Kanye West has taken to Instagram to argue for final cut approval over the upcoming Netflix documentary “Jeen-Yuhs.” Directed by Coodie Simmons and Chike Ozah and premiering at the 2022 Sundance Film Festival, “Jeen-Yuhs” is a three-part documentary filmed over 20 years of West’s career. The behind-the-scenes tell-all shows West as he builds his way from singer to businessman and becomes a global brand. The documentary also takes a look at his failed 2020 presidential bid and the death of his mother, Donda West. “I’m going to say this kindly for the last time. I must get final edit and approval...
MOVIES・1 DAY AGO