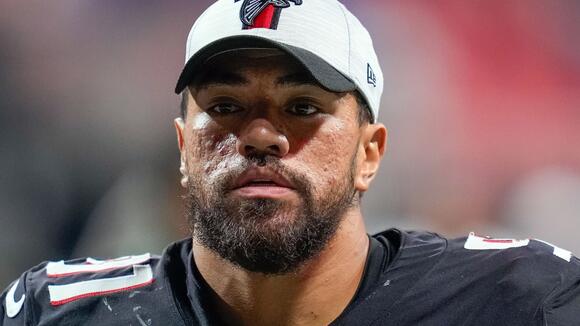 The Atlanta Falcons made a surprise cut on defense among their roster moves on Tuesday.

The Atlanta Falcons were busy again on Tuesday, making a series of roster moves. Among them was a surprise cut of linebacker Jacob Tuioti-Mariner.

Originally an undrafted free agent out of UCLA in 2018, Tuioti-Mariner played in eight games for the Falcons in 2019 before playing in all 16 last season. A defensive tackle at UCLA, he played end in the Falcons 4-3 and was trying to nail down an outside linebacker spot in the Falcons 3-4.

He was actually tied for the team lead with two sacks on the season before being cut on Tuesday.

The Falcons have shown a penchant for cutting players and bringing them back on to the practice squad. Tuioti-Mariner would be a candidate for such a move, but he has a skill set that could make him attractive to another team.

He is a tweener in the Falcons 3-4 scheme, not quite big enough for defensive end, not quite quick enough for outside linebacker, but could find a home as a 4-3 end for another team.

Cornerback Chris Williamson was signed to the 53-man roster in Tuioti-Mariner's place. He had already been flexed from the practice squad twice, so if Atlanta wanted to keep him, they needed to sign him to the active roster.

A similar move occurred last week with outside linebacker James Vaughters. After being promoted to the game-day roster twice by the Falcons, he was signed to the active roster. He had an excellent game in last week's win over the New Orleans Saints which may have prompted the release of Tuioti-Mariner.

Atlanta also cut punter Cam Nizialek. Nizialek was a bit of a redemption story early in the season. He struggled badly against the Tampa Bay Buccaneers in a loss , but head coach Arthur Smith stuck by him despite signing veteran punter Dustin Colquitt.

Nizialek rewarded his trust with an excellent performance against the New York Giants the following week in which he punted seven times for an average of 47.3 yards and dropped three punts inside the Giants' twenty.

Unfortunately, Nizialek injured his hamstring on a kickoff the following week against the Washington Football Team, and Colquitt has held the job since.

Like Tuioti-Mariner, Nizialek's days in Atlanta may not be over. He is a candidate to return to the practice squad as well.

The Falcons evened their record to 4-4 against the New Orleans Saints last Sunday, and are currently sitting in the final playoff spot in the NFC. They take on the NFC East Division leading Dallas Cowboys on Sunday who are coming off an embarrassing 30-16 loss to the Denver Broncos.

Earlier this season, Atlanta Falcons wide receiver Calvin Ridley stepped away from the field to focus on his mental health. According to NFL Network insider Mike Garafolo, this situation involving Ridley’s self assessment has not changed, but the Falcons are still holding out hope that they’ll have their 27-year-old wideout back for the 2022 season.
NFL・1 DAY AGO
Sportsnaut

NFL Network reporter Mike Garafalo believes a trade is in the works for the Falcons and Ridley.
NFL・1 DAY AGO
The Falcoholic

Already, the Falcons are making roster moves to set themselves up for 2022. Free agency is around the corner, the draft is just around the corner from that, and you can expect to see plenty of moves between now and the start of the league year. With so many changes...
NFL・2 DAYS AGO
Sportsnaut

The concept of a "home-town discount'' is a fun one, a warm-and-fuzzy one. And it can happen. But ...
NFL・9 HOURS AGO

For an Atlanta Falcons franchise that has had questions seemingly about every position, there is one player who is underappreciated. Whether it is questioning Matt Ryan or wondering if Deion Jones or Grady Jarrett are worth their cap hits few players have escaped blame in the mess that has been the Atlanta Falcons over the last two seasons.
NFL・1 DAY AGO
Sportsnaut

Super Bowl 2022: The Tampa Bay Buccaneers are the reigning NFL champions, but who'll make the playoffs — and lift the Lombardi Trophy at the end of this season?
NFL・6 HOURS AGO
ESPN

ASHBURN, Va. -- The Washington Football Team was forced to deal with another tragic situation after third-year defensive end Montez Sweat's brother was shot and killed Tuesday afternoon. According to the Henrico County Police Division's Twitter feed, Anthony Sweat, 27, was shot and killed at an apartment complex in the...
VIRGINIA STATE・18 DAYS AGO
Falcon Report

It felt like January 1991 again for Sal Maiorana as Josh Allen and the Buffalo Bills put forth perhaps the best performance in team history.
NFL・22 HOURS AGO
The Spun

Report: Jerry Jones Knows Who He Would Hire To Replace Mike McCarthy

Jerry Jones already has a replacement coach in mind for Mike McCarthy if the Cowboys fail to meet postseason expectations. No pressure, Mike. Jones has said already that it’s Super Bowl or bust for the Cowboys this postseason. That’s a tall order for a team that hasn’t even played in the Super Bowl since 1996. And don’t forget the Cowboys will most likely have to get past teams like the Buccaneers and Packers to even reach the Super Bowl, and that’ll only be possible if they beat the San Francisco 49ers on Sunday.
NFL・1 DAY AGO
Sportsnaut

Who is the highest-paid NFL coach? (today and all-time)

Interested in discovering who the highest-paid NFL coach is? You’ll find that out and plenty more in this breakdown of
NFL・2 DAYS AGO
TMZ.com

Former Dallas Cowboys defensive lineman Junior Siavii was found dead in a Kansas prison on Thursday as he was awaiting trial ... officials said Friday. A spokesperson for the U.S. Bureau of Prisons told the Kansas City Star that Siavii was discovered unresponsive at a federal prison in Leavenworth on Thursday afternoon.
NFL・2 DAYS AGO
zonecoverage.com

In the wake of Mike Zimmer’s firing, the Minnesota Vikings have a long list of criteria for their next head coach. They need to find someone who can build a culture while also saying hello in the hallway. The Vikings need to find someone who doesn’t treat the offense as an afterthought and can develop their franchise quarterback. And they need someone that can sell hope to a franchise that hasn’t been to the Super Bowl in 46 years.
NFL・2 DAYS AGO
The Spun

Arguably one of the greatest linebackers to ever step foot on the football field, Zach Thomas, is still waiting to hear his name called for the Hall of Fame. During his illustrious career, Thomas racked up 1,734 tackles, 20.5 sacks, 16 forced fumbles, 74 tackles for loss and 17 interceptions. In 13 NFL seasons he earned five All-Pro honors, seven Pro-Bowl appearances and twice lead the league in tackles.
NFL・2 DAYS AGO
Audacy

Welcome to the 2022 Coaching Tracker, a running tab of all candidates and interview requests for every NFL head coach, GM and coordinator opening this offseason.
NFL・1 DAY AGO
USA TODAY

Which NFL underdog teams could go on a surprising playoff run?

The Buccaneers' run to last season's Super Bowl title proved that there's still room for wild-card entrants to make noise in the playoffs.
NFL・2 DAYS AGO