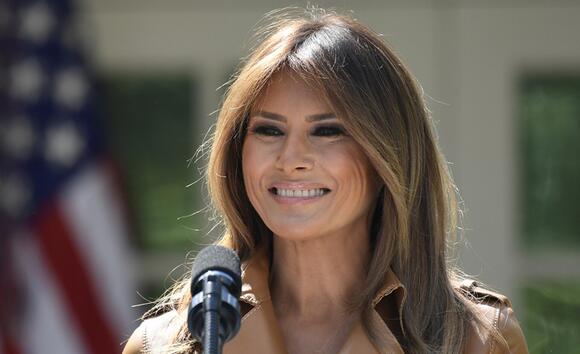 Trump was honored with the Spirit of Lincoln award during a ceremony at Mar-a-Lago hosted by the Log Cabin Republicans and The Liberty Education Forum.

She wore a long, black dress with a crew neck collar and long sleeves.

"Over the years, the @LogCabinGOP & @RichardGrenell have been pivotal in uniting people & taking a stand against bullies and labels," Trump wrote on Twitter . "Thank you for honoring my work w the Spirit of Lincoln Award. It was an honor to join you to celebrate your accomplishments!"

Trump was not the only political star at the award ceremony .

The most Educated, Smart and Beautiful First Lady America Ever Had 🥰. She brought Grace and Class to the White House for the first time in Decades.

Melania you are class and beauty and intelligence. Such a rare find and we want to see your elegance back in the WH. Love you and The Don. ♥️

Most educated ? better check your information, PHD NO, LAW SCHOOL NO, tried to pass of a none existing college degree as an architect YES YES YES..FAMOUS MODEL NO NO NO, NEVER HAD THE REAL CARD.

Fans of former President Donald Trump gathered not far from his Mar-a-Lago resort in Florida on Thursday to show support for 45 on the one-year anniversary of the Capitol riot.
WEST PALM BEACH, FL・11 DAYS AGO
WashingtonExaminer

Former President Donald Trump announced Tuesday that he is canceling his press conference set for the one-year anniversary of the Capitol riot on Jan. 6, 2021.
WASHINGTON, DC・13 DAYS AGO
WashingtonExaminer

Former first lady Melania Trump announced on Tuesday the launching of an online auction that will include the sale of her artwork and clothing.
POTUS・14 DAYS AGO
Newsweek

"A huge fan and how awesome it would be to have any souvenir but no doubt I don't have the wallet," one fan said of the auction's starting bid.
NEW YORK CITY, NY・13 DAYS AGO

Melania Trump and the art of the NFT grift

For much of the Trump presidency, Melania Trump was something of a enigma. At her public appearances, it often seemed as if she wanted to be anywhere but there — an attitude that, to be honest, could cheer feminists, who’ve long thought the role of first lady is outdated. (Count me among them.) Her Be Best initiative could feel like a coded message of support to the anti-Trump Resistance. The campaign against cyberbullying? Donald Trump was the loudest and proudest bully of them all.
POTUS・12 DAYS AGO
Axios

Former first lady Melania Trump announced Tuesday she is launching an online auction to sell the hat she wore during French President Emmanuel Macron's visit to the White House in 2018, along with digital and original paintings of herself. State of play: The auction will run Jan. 11-25 through the...
POTUS・14 DAYS AGO
Marin Independent Journal

For charity hat auction, Melania Trump is mum on how much will go to foster kids

Melania Trump said she hopes to make a charitable donation to a foster children’s program by raising at least least $250,000 through an auction of several items, including the signature white hat she wore when the French prime minister and his wife visited the White House in 2018. The...
CHARITIES・13 DAYS AGO
ABC13 Houston

Signed hat designed by Trump's personal stylist Hervé Pierre. Melania Trump announced Tuesday morning that she is holding an auction of the white hat she wore during the visit of the French first family, the Macrons, to the White House in 2018. In a statement from her office, Trump...
POTUS・14 DAYS AGO

Melania’s latest NFT is selling for £180,000 – at last one of the Trumps is showing entrepreneurial spirit | Arwa Mahdawi

The former first lady has launched a jewellery line and caviar moisturiser, but digital portraits could be her real money maker
POTUS・14 DAYS AGO
Newsweek

One QAnon follower said: "When he came out…I instantly felt it was not him. I kept trying to convince myself that it was."
ARIZONA STATE・1 DAY AGO
Newsweek

The cartoon pictures the GOP congressman as a dog, with a red tie functioning as a leash being held by Trump's hand.
OHIO STATE・4 DAYS AGO
Newsweek

Trump also took a shot at the ReidOut's Joy Reid, claiming the "MSDNC" host is "toast."
POTUS・1 DAY AGO

In August 2018, CNN discovered that a White House speechwriter, Darren Beattie, spoke at a conference alongside well-known white nationalists. He was asked to resign, but he refused, prompting the Republican White House to fire Beattie soon after. But as regular readers may recall, Team Trump wasn't quite done with...
PRESIDENTIAL ELECTION・1 DAY AGO
Newsweek

Former president Trump said that President Biden had made Dr. Anthony Fauci "like a king" during comments to supporters.
ARIZONA STATE・2 DAYS AGO
wwnytv.com

Stefanik excused herself from Washington, went to Mar-a-Lago

Former president Donald Trump has canceled the news conference he planned to hold on Jan. 6 to mark the first anniversary of the attack on the Capitol by a mob of his supporters. In a statement released Tuesday by his Save America PAC, Trump blamed the media and the bipartisan...
POTUS・13 DAYS AGO
Newsweek

Fox News host and former Trump supporter Laura Ingraham isn't ready to back him in another bid for the White House, she told a Virginia magazine.
PRESIDENTIAL ELECTION・19 HOURS AGO
Business Insider

Neil Gorsuch defied a request from Chief Justice John Roberts to wear a mask out of respect for Sonia Sotomayor, a report says

Gorsuch's refusal to wear a mask led Sotomayor, who has diabetes, to attend oral arguments virtually. The justices are all vaccinated and boosted.
CONGRESS & COURTS・4 HOURS AGO
POLITICO

Lindsey Graham has a message for Mitch McConnell if he wants to lead the Senate GOP after the 2022 midterms: have a working relationship with Donald Trump or get out. In the latest episode of The Point, CNN's Chris Cillizza unpacks McConnell's tumultuous relationship with Trump and why being on good terms with the former president is crucial to leading the Republican Party moving forward.
CONGRESS & COURTS・3 HOURS AGO