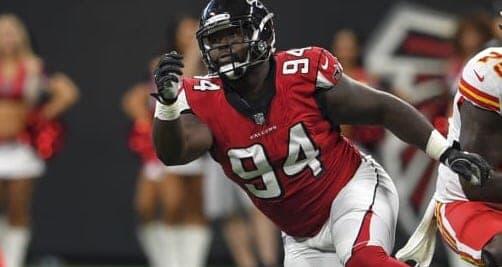 The Atlanta Falcons have signed a big defensive lineman to their 53-man roster while releasing another.

The Atlanta Falcons have on Monday signed defensive lineman Anthony Rush to the active roster.

Rush was flexed from the practice squad ahead of the Week 9 victory against the New Orleans Saints, and the big nose guard had an impactful performance.

We have clamored for more size on the defensive line for coordinator Dean Pees' 3-4 defense, and Rush brings plenty of size.

Listed at 6-5 and 350 pounds, Rush was more than just a space-eater against the Saints as he contributed three tackles and a tackle for loss.

Considering starting nose guard Tyeler Davison is rated as the 91st out out of 123 defensive linemen by Pro Football Focus , there is room, we can argue, for Rush to earn more playing time.

The Falcons have also made their “weekly Elliot Fry move.” The kicker has yo-yo'd on and off the practice squad nearly every week this season. This is the "cut" week for Fry.

Expect him to be resigned to the practice squad in the next week or so.

Running back Caleb Huntley takes Fry's place on the practice squad. Huntley was an undrafted free agent out of Ball State who showed flashes of potential in the preseason.

Tight end Ryan Becker and defensive lineman Deadrin Senat have been released from the team off of injured reserve.

Senat is particularly a disappointment as the former third-round pick only started two games in four seasons with the Falcons. He had a promising start to his career with 30 tackles as a rookie in 2018, but he only has four tackles since.

The Falcons travel to Dallas this weekend to take on the Cowboys. Atlanta is 3-1 on the road this season and will face an angry team that was embarrassed by the Denver Broncos 30-16 on Sunday in a game that was much worse than the score indicated.

Wide receiver went from strength to absent quickly with the Atlanta Falcons. Who could the Falcons target in free agency to rebuild their receiver room?
NFL・1 DAY AGO
Falcon Report

The Falcons must make a decision on their backup tight end.
NFL・2 DAYS AGO
Falcon Report

'I would not be surprised at all to see WR Calvin Ridley dealt to the New England Patriots this offseason,' says NFL insider
NFL・2 DAYS AGO
Falcon Report

Who could the Atlanta Falcons add through free agency to upgrade right tackle?
NFL・2 DAYS AGO

Ben Roethlisberger played what will likely be his final game in the NFL as the Steelers were blown out by the Kansas City Chiefs in the wildcard round. Ben’s final season should be a warning not only to the Atlanta Falcons but to the rest of the league. With...
NFL・8 HOURS AGO
Sportsnaut

NFL TV ratings, a look forward: The NFL Playoffs have arrived, following a 2021 regular season that saw interest in
NFL・2 DAYS AGO
Sportsnaut

When modern football fans think of the Atlanta Falcons, quarterback Matt Ryan is likely one of the first names that
NFL・11 HOURS AGO
Falcon Report

If Payton would ever exit the NFC South? That would be helpful to the Atlanta Falcons' pursuit of the top spot in the division.
NFL・9 HOURS AGO

The Atlanta Falcons have announced their first moves of the offseason.
NFL・1 DAY AGO
Falcon Report

This is the first of a ten-part series reviewing the Falcons season and taking a look at the future outlook position-by-position, beginning with the most important position in all of sports — quarterback. Not many organizations have had more stable quarterback situations than the Falcons have had with Matt Ryan, which looks to continue in 2022.
NFL・1 DAY AGO
Falcon Report

A bidding war for him by AFC teams like the Patriots, Jets and Dolphins? That can help bump up the return on a trade. But …
NFL・1 DAY AGO

A number of QB’s are expected to come off the board in the back half of the first round, most of whom the Lions will have coached at the Senior Bowl.
NFL・2 DAYS AGO
The Spun

The Cleveland Browns’ season didn’t end the way they wanted it to, as the franchise took a step backward from their 11-5 campaign last year to fall to 8-9. One of the big reasons for the Browns’ step back was the performance of quarterback Baker Mayfield, who noticeably struggled as he attempted to play through a nagging shoulder injury. Mayfield’s struggles opened up the rumor mill to a possible Browns trade, to which an anonymous NFL executive responded to with a stern warning to Cleveland, via Jeremy Fowler of ESPN (h/t Browns Wire):
NFL・2 DAYS AGO
Sportsnaut

Michigan Wolverines head coach Jim Harbaugh could be headed back to the NFL. Despite criss-crossing the country in a full-court
NFL・2 DAYS AGO
Sportsnaut

The 2021 NFL regular season is over and playoffs are in full swing, which brings us to one of our
NFL・2 DAYS AGO
ESPN

TAMPA, Fla. -- Former Buccaneers wide receiver Antonio Brown said his recent sideline outburst against the New York Jets that resulted in his dismissal from the Buccaneers, and previous incidents he has been involved in, have been miscategorized as "mental health issues." In a preview of an episode of "I...
NFL・1 DAY AGO
Audacy

Chris Godwin will be among a robust group of wide receiver free agents this offseason and ought to have plenty of suitors despite his season-ending ACL injury.
NFL・2 DAYS AGO