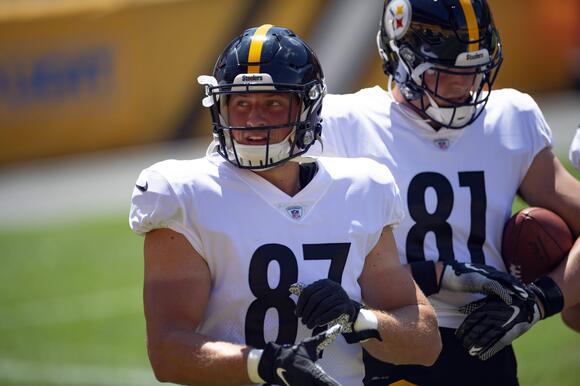 The Steelers have elevated tight end Kevin Rader to the active roster for their Monday Night Football game against the Chicago Bears at Heinz Field.

With tight end Eric Ebron out with a hamstring injury, Rader will take his place on the roster, but Pat Freiermuth and Zach Gentry will be the starters.

The 26-year-old out of Pine Richland High School has played in one game for the Steelers in his career, last season during their Week 17 game against the Browns. He was also active for the Wild Card playoff loss but did not play.

Why is Kendrick Bourne still in Belichick's doghouse?

Bill Belichick continues to only play Kendrick Bourne sparingly, as he was on the field for just 18 snaps Sunday in the New England Patriots’ loss to the Baltimore Ravens
NFL・13 MINUTES AGO
93.7 The Fan

Some notes from the Pitt win over Rhode Island as QB Kedon Slovis returned, some love for the fullback & a Steeler coach the honorary captain
PITTSBURGH, PA・1 DAY AGO
93.7 The Fan

Better at times, the Steelers rush defense had its issues again in a pair of losses, what a couple of defensive players are saying about the fix
PITTSBURGH, PA・3 HOURS AGO
93.7 The Fan

The Penguins, particularly general manager Ron Hextall, feel that they’re in a good spot from a talent and depth standpoint. But both of those things come with a cost. And the Penguins, as currently constructed, are too expensive.
PITTSBURGH, PA・2 DAYS AGO

Patrick Mahomes, Eric Bieniemy Have to Be Separated by Andy Reid After Sideline Argument

Coming off four straight first round playoff exits and five consecutive series losses, and with an aging group of accomplished players around him, Sidney Crosby’s goal is still the same.
PITTSBURGH, PA・2 DAYS AGO
93.7 The Fan

The Pittsburgh Penguins returned to action today with their first preseason game against the Columbus Blue Jackets, winning 3-2 in overtime
PITTSBURGH, PA・18 HOURS AGO
93.7 The Fan

The Pittsburgh Penguins lost their second pre-season game to the Columbus Blue Jackets by a score of 5-1. hey won their earlier game in Pittsburgh by a score of 3-2 in overtime.
PITTSBURGH, PA・12 HOURS AGO