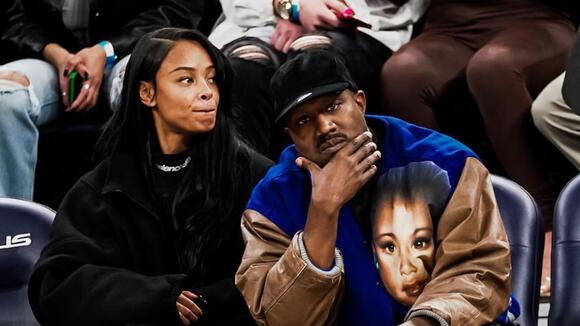 After a rumored summer romance with Irina Shayk, it looks like Kanye West is moving on with a new woman!

Page Six reports Kanye and Vinteria have been “hooking up… for a while now.”

The paper says she was with the rapper in Miami for his “Drink Champs” interview last month and attended Kanye’s Sunday Service last weekend.

During the “Drink Champs” podcast, West said he still wanted to be with ex Kim Kardashian.

Kardashian filed for divorce in February after seven years of marriage, and is now linked to “Saturday Night Live” star Pete Davidson.

Kanye, however, says she is “still my wife,” adding, “There ain’t no paperwork.”

He also reacted to Kim hosting “SNL,” claiming, “’SNL’ making my wife say ‘I divorced him’ because they just wanted to get that bar off, and I ain’t never even seen the papers, we’re not even divorced.”

West went on, “That ain’t no joke to me. My kids want their parents to stay together. I want us to be together. But if you look at the media, that’s not what they promoting. That’s not what they want. They want it to be a new wedding, a new episode, a new TV show. Then they have people all around and my wife here, you know, this publicist that’s next to her — I don’t f**k with her.”

He’s saying while traveling with his “GF” I want Kim back and they ain’t signed no papers. Hmmmn. I don’t know that I’d be throwing it back with YE as he professes his love for his wife. Keep some respect for yourself young lady.

Mmhm..all these weird antics is what I don't get me. however people get divorced all the time..your personal life is what you make it..should not have been spotlighted ..Plenty of stats manage it..no excuses people..you want the attention ..it's obvious your getting it..I respect the ones that keep their private life..PRIVATE..just saying

Sir. You're out with your gf. what difference does it make if shes out with someone else. these 2 people are a waste of space. 🙄🙄

Kim Kardashian is still reeling over Kanye West’s behavior over the weekend — quick recap: he accused her of not inviting him to their daughter Chicago’s 4th birthday party, although he had allegedly suggested they throw separate parties due to their divorce proceedings. Now, Kardashian is reportedly feeling “very hurt” by his accusation that their children are being primarily raised by nannies.
CELEBRITIES・4 DAYS AGO
Cosmopolitan

Given the fact that they went from "Strangers to Group Dates with Madonna" in approximately 14 days, the world has some questions about Kanye West and Julia Fox. Namely, about whether their whirlwind relationship is a PR stunt to take attention away from Kim Kardashian and Pete Davidson. And Julia herself went ahead and addressed this speculation on the most recent episode of her podcast Forbidden Fruits, via E! News.
CELEBRITIES・10 DAYS AGO
HipHopDX.com

Kanye West‘s budding romance with Julia Fox has Kim Kardashian’s blessing. According to TMZ‘s sources, Kim is cool with Kanye dating the Uncut Gems actress because Fox is a “fan” of the Kardashian family, making the prospect of co-parenting their four children — North, Saint, Chicago and Psalm — a whole lot easier.
CELEBRITIES・12 DAYS AGO
Reality Tea

Kanye West Thanks Kylie Jenner And Travis Scott For Helping Him Find Daughter Chicago’s Birthday Party; Kim Kardashian Denies That She Is Keeping Kanye From Seeing His Kids

Oh, what a tangled web the Kardashian family weaves. Keeping Up With The Kardashians star Kim Kardashian may be divorcing rapper Kanye West, but their love lives are dominating the headlines. That is just what momager Kris Jenner wants with the new Kardashian series for Hulu supposedly already filming. Kanye, who changed his name to […] The post Kanye West Thanks Kylie Jenner And Travis Scott For Helping Him Find Daughter Chicago’s Birthday Party; Kim Kardashian Denies That She Is Keeping Kanye From Seeing His Kids appeared first on Reality Tea.
CELEBRITIES・5 DAYS AGO

Rapper Kanye West has responded to his daughter North having a viral TikTok account, saying he doesn’t want his children to be on the popular app without his permission. In the past few years, short-form video platform TikTok has seen countless celebrities make an account to join in on the viral fun.
CELEBRITIES・8 DAYS AGO
The Independent

Sure, Pete Davison beefed up his security lately. But he reportedly thinks the antics of Ye in the past few weeks have been “hilarious.” Page Six notes Davidson heard the threats from Kanye West, including the desire to “beat his ass,” and he finds them as nothing but humor.
CELEBRITIES・5 DAYS AGO
Footwear News

Julia Fox and Kanye West have continued their matching couples’ style from day into night. After a memorable public outing at Kenzo’s Fall 2022 show, where they twinned in denim outfits, the duo took Paris by storm again—this time, in all leather. Following Rick Owens’ “glamsleazy” Fall 2022 menswear show last week, Fox stepped out for dinner with West in a red leather dress by the American designer. The one-shoulder number featured a gray lining and asymmetric hem, which stretched to her thighs. Fox’s look centered on the dress, framed by a long black leather trench coat and silver pyramid-shaped earrings. Similarly to...
BEAUTY & FASHION・1 DAY AGO

Kanye West has arrived at his daughter, Chicago's, birthday party after originally claiming that his ex-wife, Kim Kardashian, wouldn't allow him to be present. Chicago turns four years old on January 15. TMZ reports that West was scheduled to spend the rest of the day with Chicago after 4:00 PM,...
CELEBRITIES・9 DAYS AGO
illinoisnewsnow.com

Kanye West reportedly crashes Kim Kardashian’s party for Chicago, then throws his own

After Kanye West made claims that estranged wife Kim Kardashian would not let him into their daughter Chicago‘s birthday party, the rapper reportedly crashed it and then threw a party of his own for the four-year-old. “Yo, I’m so happy right now,” the Yeezy designer, 44, said in an...
CELEBRITIES・7 DAYS AGO
The Independent

‘I’m the diamond in the trash’: Pete Davidson reveals why he’s so popular with women

Pete Davidson has finally shared his own insight on the question that has been on everyone’s mind – just what is it about this seemingly ordinary 28-year-old that makes him so attractive?The comedian, who hails from Staten Island, New York, has dated a plethora of successful, beautiful women in the last decade including Ariana Grande, Kate Beckinsale, Phoebe Dynevor and most recently, Kim Kardashian.The Independent undertook its own investigation into Davidson’s appeal late last year, finding that a myriad of reasons are likely responsible for his successes.These include his openness about his mental health struggles, his straightforward approach to...
CELEBRITIES・19 HOURS AGO
The Independent

Uncut Gems star Julia Fox has dismissed claims she is only dating Ye (formerly known as Kanye West) “for the money”.Fox is currently going out with the Donda artist, who separated from his wife, reality TV star Kim Kardashian, last year.Speaking on Friday’s (21 January) episode of her Forbidden Fruits podcast, Fox said that she “really couldn’t care” about all the publicity her relationship with Ye has been getting in the media.“It’s funny cause I’m getting all of this attention, but I really couldn’t care,” she said. “People are like ‘Oh, you’re only in it for the fame, you’re...
CELEBRITIES・2 DAYS AGO

Kim Kardashian ‘Forgot’ How To Have Fun With Kanye West: She’s Loving Being ‘Normal’ With Pete Davidson

Kim Kardashian often had a difficult time with her ex Kanye West. That’s why, as sources are EXCLUSIVELY revealing to HL, her new flame Pete Davidson is a welcome change. Kim Kardashian is loving her new romance with Pete Davidson, as sources are revealing how different the relationship is compared to her ex, Kanye West. “Kim almost forgot how to have fun when she was with Kanye. Pete is humbling her, and she is learning humility from him,” a source EXCLUSIVELY shared with HollywoodLife. “Her family has never seen this side of her before, but they are just happy that she’s so happy.”
CELEBRITIES・12 DAYS AGO
Life and Style Weekly

Sending a message? Fans think Kim Kardashian shaded estranged husband Kanye West with her latest gym outfit by wearing Nike Air Max 95s instead of her usual Yeezy sneakers. The Keeping Up With the Kardashians alum, 41, shared a slew of photos via Instagram on January 22 showing off her adorable pink workout attire. While she was seemingly flaunting her matching set from Bo + Tee, which retails for less than $100, fans couldn’t help but notice she put her Nike Air Max shoes on full display.
CELEBRITIES・16 HOURS AGO
extratv

A new interview with Julia Fox just dropped this morning on the heels of her star-studded date night with Kanye West. Fox and West were spotted at Delilah in L.A. with Madonna, Antonio Brown, Floyd Mayweather, The Game and Evan Ross. Check out the video here. As they left the...
CELEBRITIES・11 DAYS AGO
AceShowbiz

Julia Fox Puts 'No Labels' on Kanye West Relationship, Admits She's 'Not the Obvious Choice' for Him

Taking to her 'Forbidden Fruits' podcast, the Gotham Award winner also addresses speculation that her romance with the 'Black Skinhead' rapper is just a PR stunt. AceShowbiz - Julia Fox has spilled more about her relationship with Kanye West as the two continue to hang out together. Having recently been spotted kissing, the actress has hinted that they are not dating exclusively as they don't put a label on their relationship.
CELEBRITIES・10 DAYS AGO
XXL Mag

Although Kanye West is going through a divorce with his estranged wife, Kim Kardashian, it appears he sent a stern warning to the Kardashians when it comes to his children. In an interview with Jason Lee of Hollywood Unlocked, which premiered on Monday (Jan. 24) on YouTube, the Chicago rapper-producer, now known as Ye, spoke candidly about his impending divorce and how he plans to stay in his children’s lives no matter what.
HIP HOP・10 HOURS AGO
The Hollywood Reporter

Sundance: Kanye West Doc Directors on How the Trilogy Came Together

Kanye West’s public demand this week to have final approval over jeen-yuhs, the three-part documentary about his career, is not the first time he’s tried to have a say in the docs’ narrative. Filmmaker Coodie Simmons recalls conversations with the rapper about jeen-yuhs when it was in earlier stages. “When it came down to making it, I had to let him know to make this film authentic, he had to step back,” says Simmons, who co-directed the doc with Chike Ozah, in an interview with The Hollywood Reporter. “I had to take control of this narrative that God created — we didn’t...
MOVIES・1 DAY AGO
Power 102.9 NoCo

Pete Davidson doesn't seem to be taking Kanye West's recent threat towards him seriously. According to a report from Page Six on Wednesday (Jan. 19), the comedian finds Ye's bar about him on The Game's "Eazy" track to be "hilarious." At the end of his verse on the track, Kanye raps, "God saved me from that crash/Just so I can beat Pete Davidson’s ass.”
CELEBRITIES・4 DAYS AGO
extratv

It seems like the Kanye West-Kim Kardashian divorce isn't so friendly anymore — and this comes from Kanye's own lips!. Late Friday, the rapper released a new song called "Eazy" in which he makes his feelings about Kim dating "SNL" star Pete Davidson perfectly clear. At one point, he raps about nearly dying in 2002, "God saved me from that crash / Just so I can beat Pete Davidson's ass." This throw-down is followed by a sample of a woman's voice (Kim's?) asking, "Who?"
CELEBRITIES・9 DAYS AGO