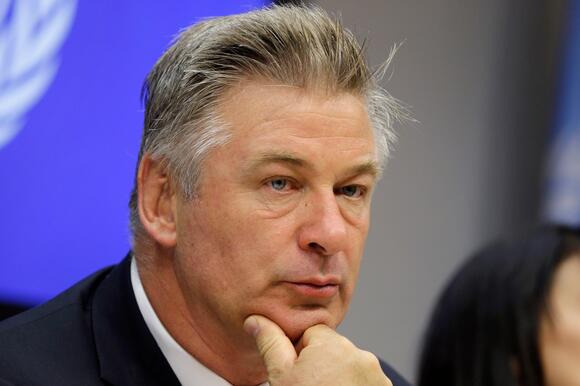 Further tragedy has befallen Alec Baldwin’s Rust movie as a crew member faces having his arm amputated after being bitten by a venomous spider on set.

It comes weeks after cinematographer Halyna Hutchins, 42, was accidentally fatally shot after actor Baldwin, 63, unknowingly discharged a loaded gun at the ranch in New Mexico.

Director Joel Souza, 48, was standing behind Ms Hutchins at the time and needed urgent medical care after also being injured.

Now, Sky News reports that Jason Miller, a lamp operator and pipe rigger, was closing the set when he was bitten by a brown recluse spider.

According to a fundraising page that was set up for the afflicted crew member, Mr Miller suffered necrosis and sepsis in his arm following the bite.

He is currently in hospital where he has already undergone multiple surgeries, but may need to have his arm amputated if medics are unable to control the spread of infection.

OMG!!! Brown recluse spiders can be deadly!!! Years ago, one bit me on the top of my foot. It's like the infection just eats away your skin. Horrible!! One Dr. wanted to cut off part of my foot!! I went to another Dr. Had to have intravenous antibiotics for 30 days!! Saved my foot!!..... What's with ALL the tragedy on this movie set!! It looks like it's DOOMED!!!! Maybe they should walk and say goodbye to this movie!!! 🔫👩⚰😪...🕷👦🏨😱

Poor guy. First he finds out, after having his first four children, with this wife, that his "Spanish" bride was not from Spain but was born in the US, and that her accent was fake; and now this.

I don't think this movie's gonna get made, They should just go to the sequel right now........ Rust Final Destination!

Alec Baldwin has admitted that accidentally shooting and killing cinematographer Halyna Hutchins is “the worst situation I’ve ever been involved with”. The actor, 63, made the admission in a 13-minute video posted to Instagram during which he offered an update on his emotional state of mind and thanked fans for continuing to send him messages of support.
CELEBRITIES・13 DAYS AGO
newschain

Two teenagers have been arrested in Manchester after a British man flew to the US, bought a weapon and held people hostage in a 10-hour stand-off at a synagogue. Malik Faisal Akram, originally from Blackburn in Lancashire, was shot dead when the FBI entered the building in Texas on Saturday night.
PUBLIC SAFETY・7 HOURS AGO
newschain

A woman unable to contact her parents after a volcano erupted near Tonga has called it “one of the toughest moments” of her life. Siniva Filise, 42, who lives in Barry, Wales, has been struggling to contact her father Fakahau Valu, 73, and her mother Lioneti Valu, 66, since Saturday morning.
ENVIRONMENT・7 HOURS AGO
Fox News

Nicolas Cage commented on the deadly "Rust" shooting and shared his thoughts on an actor’s responsibility to be responsible with firearms on movie sets. The death of cinematographer Halyna Hutchins on the New Mexico set of the indie-Western movie sparked a debate in Hollywood about whether real guns have any place on a movie set in an age where it is so easy to use fake guns and add things like muzzle flare in post-production.
CELEBRITIES・10 DAYS AGO

Alec and Hilaria Baldwin pulled over by police in the Hamptons

Alec Baldwin and his wife Hilaria were pulled over by police in the Hamptons on Saturday (18 December).Photographs emerged over the weekend of Baldwin waiting inside their car while Hilaria spoke with an East Hamptons Police officer on the side of the road, before taking out her phone and displaying the screen.According to reports, she spoke with the officer briefly before returning to the vehicle. It is not yet clear why the couple were pulled over.The Independent has contacted representatives for the Baldwins and the East Hamptons police for comment.Last week, authorities in the US issued a search warrant...
CELEBRITIES・27 DAYS AGO
Newsweek

In a holiday message for his fans, Alec Baldwin said "not a day goes by that I don't think about" the fatal shooting of "Rust" cinematographer Halyna Hutchins.
CELEBRITIES・23 DAYS AGO
Ok Magazine

Alec Baldwin has seen better days. The 63-year-old — who is still dealing with the fallout from the fatal October shooting on the Rust film set — was spotted looking rundown while heading into his New York City apartment. The 30 Rock alum was photographed on Thursday, January...
CELEBRITIES・9 DAYS AGO
enstarz.com

Speculations believe that Alec Baldwin and his wife Hilaria are going through a challenging path in their relationship as they juggle their career and family while facing lawsuits filed against them. One article claimed that the fallout of Halyna Hutchins' tragic death had put the married couple into their breaking...
RELATIONSHIPS・6 DAYS AGO

In the months that have passed since the tragic death of cinematographer Halyna Hutchins on the set of Rust, the aftermath of those events have reinforced the need to get to the bottom of what happened. Actor Alec Baldwin continues to struggle with that death, and in a painful new video message, he reflects on the encounters he’s had in recent days, highlighting both the positive and the negative.
CELEBRITIES・13 DAYS AGO
The Guardian

The actor Alec Baldwin has said suggestions he is not complying with the investigation into a deadly shooting on a New Mexico film set last year are “bullshit and a lie”. Baldwin was holding a revolver during a rehearsal for his movie Rust on 21 October when it fired, killing cinematographer Halyna Hutchins and wounding the film’s director.
PUBLIC SAFETY・8 DAYS AGO
Los Angeles Times

In Connection With the Shooting in “Rust,” a Warrant Has Been Issued for Alec Baldwin’s Phone

TAOS, New Mexico (Reuters)-The authorities on Thursday said they’re currently working with the police as they’re securing and working to get Baldwin phone from actor Alec Baldwin’s cellphone as a pursuit against the fatal shooting of a cinematographer on the set of the Western movie “Rust.”
TAOS, NM・8 DAYS AGO

Alec Baldwin is offering somber contemplation about the coming year following the deadly October shooting of cinematographer Halyna Hutchins on the set of the film Rust. The actor posted a nearly 13-minute video to Instagram on Saturday in which he offered an update on his emotional state of mind and thanked fans for continuing to send him messages of support. “I’ve had more people who have been kind and thoughtful and generous of spirit than I’ve had people who are malignant about the death Halyna Hutchins,” Baldwin said in the footage. “I’m not afraid to say that and to couch that in...
CELEBRITIES・14 DAYS AGO
fox40jackson.com

“Rust” armorer Hannah Gutierrez-Reed has sued Seth Kenney, the man who provided the prop ammunition used by the production team of the Alec Baldwin movie, which was halted following a fatal shooting in October. Gutierrez-Reed filed the lawsuit Wednesday in New Mexico, citing the state’s unfair-trade-practices law. She also...
PUBLIC SAFETY・4 DAYS AGO
enstarz.com

Alec Baldwin got bombarded with a new claim that he is not cooperating with the police by keeping his phone to himself. Last month, a judge signed the search warrant, demanding Baldwin turn over his phone. The authorities wanted to acquire it in pursuit of obtaining messages, photos, call logs, and private messages on his social media accounts.
CELEBRITIES・7 DAYS AGO
Boston Globe

The armorer for “Rust,” the low-budget movie whose filming halted after a crew member was killed and another was injured when a gun discharged a live round instead of a dummy, is suing the production’s ammunition supplier, alleging that he introduced “dangerous products” onto the set.
PUBLIC SAFETY・3 DAYS AGO

In a video looking ahead to 2022, Alec Baldwin reflected on the fatal shooting on the set of his film "Rust." The actor and producer posted the almost 13-minute video on his verified Instagram account on New Year's Day that he captioned, "Another chance to let go of anything that is hurting us. Destroying us."
CELEBRITIES・13 DAYS AGO
6abc Action News

"They can't just go through your phone and take your photos, or your love letters to your wife, or what have you," he said.
PUBLIC SAFETY・7 DAYS AGO
Vulture

After 29 Days, Alec Baldwin Turns Over His Phone in Rust Investigation

Update, Friday January 14, 5:02 p.m.: Alec Baldwin has finally turned his cell phone over to the authorities nearly a month after investigators in the Rust case issued a warrant to seize it. Variety reports that Baldwin handed in the phone to law enforcement in Suffolk County, New York, after the Santa Fe sheriff’s office put out a press release on Thursday stating that Baldwin had yet to turn over his phone. According to Variety, the New Mexico prosecutor’s office was “in negotiations” with Baldwin’s attorney to get him to comply with the warrant. The data on Baldwin’s phone could prove useful to the investigation as a log of his communications leading up to the October 21 event, when a prop gun Baldwin was using in a scene discharged, killing cinematographer Halyna Hutchins and wounding director Joel Souza.
SUFFOLK COUNTY, NY・2 DAYS AGO
Newsday

Reflecting on 'Rust' tragedy, Alec Baldwin says '22 should be a year of 'less negativity'

Actor Alec Baldwin, whom some have vilified online after an October movie-set tragedy in which he accidentally shot and killed a crew member with an inexplicably loaded prop gun, reflected on the experience in an Instagram video posted New Year's Day. "I was in a coffee shop here on Long...
AMAGANSETT, NY・13 DAYS AGO