Falcons Coach Arthur Smith: 'My Money is on Matt Ryan' 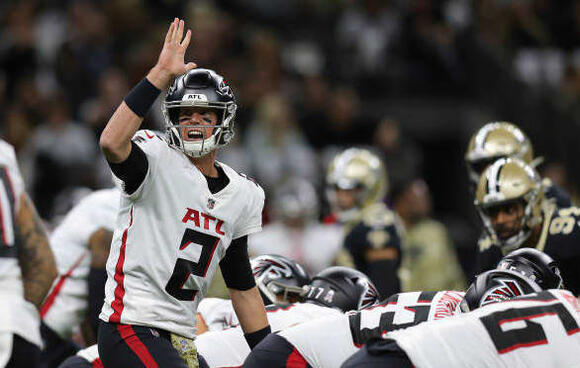 Atlanta Falcons head coach Arthur Smith felt good about his chances of a comeback with Matt Ryan at the helm.

The Atlanta Falcons in Sunday's Week 9 built a fat lead into the fourth quarter at the New Orleans Saints ,,,, just to watch it evaporate. The Saints scored three touchdowns in the fourth to take a one-point lead, but they left 1:01 on the clock, and quarterback Matt Ryan and the Atlanta offense had a chance.

Ryan began the drive with a 64-yard pass to Cordarrelle Patterson, and Pro Bowl kicker Younghoe Koo put the finishing touches on a 27-25 Falcons win that avoided a loss after another fourth-quarter (near-) collapse.

With 61 seconds left on the clock, coach Arthur Smith felt good about the Falcons' chances.

"We hope so,'' he said. "That is what we said when Mr. Blank hired me and Terry [GM Fontenot]. We wanted a tough-minded football team. It’s hard to build that. You get in games like this, yeah, sure, you would love to be in four-minute and win easy in the fourth quarter."

"Our guys don’t flinch. I was joking with [Falcons owner Arthur] Mr. Blank that I’ll get a text later from my mother telling me to stop doing that. We’re just trying to win. So, we’ll do it any way we can.

"And,'' added Smith, "when you put the ball in Matt Ryan’s hand with the game on the line, my money is on Matt. That’s how I feel.”

The Falcons had a 24-6 lead and had a familiar feeling of blowing a big lead and losing. Should this one have been more comfortable?

"It’s the National Football League,'' Smith said. "It’s not for soft souls. If you get comfortable, shame on you."

With the win, the Falcons have moved back to .500 at 4-4 and kept their playoff hopes alive. The Falcons are currently the seventh seed in the NFC, and if the season ended today, would be in the playoffs.

Atlanta travels to Dallas next week, the division leader in the NFC East. But the Cowboys were just trounced at home by the previously 4-4 Denver Broncos.

The playoffs seemed like a long-shot just a week ago after the Falcons were bullied by the Carolina Panthers at home, but they're still a possibility.

But it's no time to get comfortable. These are the Atlanta Falcons, and it's the National Football League. No "soft souls'' here. Just a lot of trust in Matt Ryan.

Davis is an impending free agent this offseason.
NFL・2 DAYS AGO
Falcon Report

The Atlanta Falcons have two draft picks in the second round of the 2022 NFL Draft... their own at No. 43, and the Tennessee Titans pick they acquired in the Julio Jones trade. Jones and the Titans were eliminated from the playoffs on Saturday by the Cincinnati Bengals giving Atlanta...
NFL・2 DAYS AGO

After spending over a decade in the NFL, tight end Lee Smith has officially announced his retirement. Smith explained his decision in a heartfelt video released by the Atlanta Falcons, the last team he suited up for in the pros. In his announcement video, Smith revealed that he’s going to...
NFL・10 HOURS AGO
Falcon Report

Julio Jones struggled in his first season away from the Atlanta Falcons.
NFL・1 DAY AGO
Sports Illustrated

The Atlanta Falcons look for help on the offensive line with former Pittsburgh Steelers, Chicago Bears starter Rashaad Coward. Julio Jones struggled in his first season away from the Atlanta Falcons. 13 hours ago. 13 hours ago. Gono signed a one-year $3.4 million contract with the Falcons prior to the...
NFL・1 DAY AGO
Pro Football Rumors

Smith spent his NFL days with the Bills, Raiders and Falcons, playing in Atlanta for one season. He will walk away after 16 games with the Falcons, having assisted in Cordarrelle Patterson‘s late-career running back breakout. “I couldn’t feel more blessed that I get to step away on my...
NFL・5 HOURS AGO

No Payton? No Brady? New NFC South Would Appeal to Falcons

The Atlanta Falcons could hold onto Matt Ryan and get the most talent quarterback in the NFL Draft.
NFL・19 HOURS AGO
Falcon Report

Twitter Therapy: Did Falcons Stress You Out This Season?

NFL picks against the spread. NFL Championship Sunday edition. And then there were four. With three road teams winning on
NFL・2 DAYS AGO
Yardbarker

Sean Payton has reportedly not yet committed to returning to the Saints next season while Troy Aikman could be leaving FOX for Amazon, leaving an opening that could put the Saints coach in the booth.
NFL・2 DAYS AGO
Ok Magazine

All eyes have been on Aaron Rodgers after the Green Bay Packers lost their playoffs game 10-13 over the weekend. The team lost to the San Francisco 49ers on Saturday, January 22. The 38-year-old admitted after the game that he was feeling "numb," telling reporters: "I didn’t think it was gonna end like this," per Fox News.
NFL・1 DAY AGO
On3.com

Just two days before competing in an NFL divisional round playoff game, Leonard Fournette learned his cousin had died. As tough as it was to swallow, the Tampa Bay running back knew he still wanted to play. He suited up and delivered an impressive two-touchdown performance in spite of his...
NFL・2 DAYS AGO