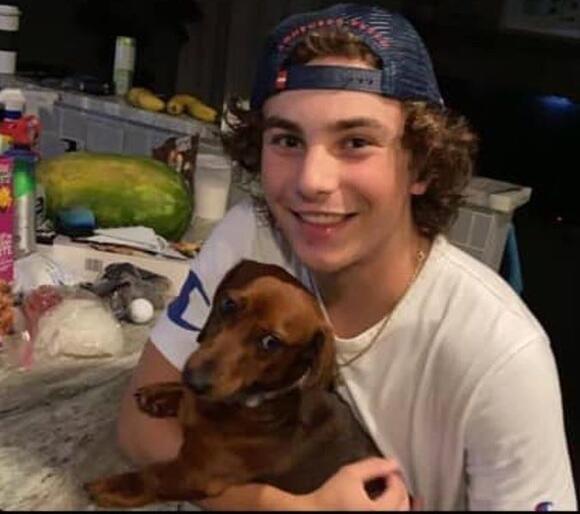 EAST LANSING, Mich. (WWJ) -- As the search for a metro Detroit teenager who went missing on the campus of Michigan State University enters a second week, his family is offering a $5,000 reward for tips that help bring him home.

The family of 18-year-old Rochester Hills native Brendan Santo says they’re working with Crime Stoppers of mid-Michigan to anyone who can provide credible information that leads to his safe return.

Tips can be submitted through the existing MSU Police and Public Safety toll-free tip line at 844-99-MSUPD, or through Crime Stoppers of Mid-Michigan at 517-483-STOP.

Police have said foul play is not suspected in the teen’s disappearance and they have no evidence to suggest he was impaired at the time he went missing.

Police located Santo’s truck on campus, which has not moved since he went missing.

Inspector Chris Rozman, with MSU Police and Public Safety, says using these additional resources will “ensure that all investigative avenues are being explored.”

“We have been collaborating with our local, state, and federal partners for several days, and this arrangement formalizes and expands our team while making additional expert resources and personnel available to assist us in bringing Brendan home,” Rozman said. “We particularly appreciate the continued help and support offered by Grand Valley State University and Oakland County, who have been providing investigators with direct contact to those close with Brendan.”

A teen who fired at and fled from two Wayne County Sheriff’s Deputies has been given a bond increase to $250,000 with a GPS tether and the condition of no longer driving a motor vehicle.
DETROIT, MI・21 HOURS AGO
WWJ News Radio

Sandra Wilson, 83, was reported last seen by her family in Livonia at approximately 8 p.m. Sunday, near Newburgh and Schoolcraft Roads, just north of I-96.
FARMINGTON HILLS, MI・1 DAY AGO
WWJ News Radio

Have you seen Sandra? Missing 83-year-old never made it to Farmington Hills home; family concerned for her welfare

Sandra Wilson is 83 years old and was last seen by her family in Livonia at approximately 8 p.m. Sunday, near Newburgh and Schoolcraft Roads, just north of I-96.
FARMINGTON HILLS, MI・1 DAY AGO

Another metro Detroit high school student is coming face-to-face with the law after making a school threat. A student at Taylor High School was arrested after a threatening note was found in a school bathroom Tuesday afternoon.
TAYLOR, MI・1 HOUR AGO
WWJ News Radio

The suspect then stabbed with victim multiple times with a sharp object and fled the scene, police said. They’re hoping that someone in the public can identify him.
DETROIT, MI・20 HOURS AGO
WWJ News Radio

Police said a preliminary investigation found the driver of a Chrysler Town and Country minivan was head eastbound on Michigan Ave. to Greenfield Rd. when he left the roadway, striking utility poles and a tree.
DEARBORN, MI・1 DAY AGO
WWJ News Radio

Detroit police say a man is in custody in connection with a shooting at Andy’s Market and a robbery at a beauty supply store. A 64-year-old clerk was fatally shot on Jan. 17.
DETROIT, MI・1 DAY AGO
WWJ News Radio

More than $45,000 is being rewarded to anyone who can provide information leasing to an arrest in the murder of a 21-year-old student athlete.
DETROIT, MI・2 DAYS AGO
WWJ News Radio

A Rochester Hills man is facing felony charges for allegedly threatening two firefighters with a gun after showing up to his home to help him with a medical emergency.
OAKLAND COUNTY, MI・1 DAY AGO

At approximately 12:05 a.m., MSP was contacted by a female driver who said she was shot at on southbound M-39 near Joy Road on the city’s west side.
DETROIT, MI・2 DAYS AGO
WWJ News Radio

Officials said at about 12:30 p.m. on Friday, after an “extensive” search, a body was recovered from the Red Cedar River in East Lansing by Michigan State University Police and Public Safety and their law enforcement partners.
EAST LANSING, MI・4 DAYS AGO
WWJ News Radio

A 73-year-old Wisconsin man has died after a snowmobile crash Sunday afternoon in Michigan’s Gogebic County, the westernmost county in the Upper Peninsula, along the Wisconsin border.
GOGEBIC COUNTY, MI・1 DAY AGO
WWJ News Radio

The man charged with setting fire to his pregnant girlfriend posted bond and was released from the Wayne County Jail last week. That freedom didn’t last long, though, as Devonne Marsh was turned over to the custody of the Macomb County Sheriff.
MACOMB COUNTY, MI・2 DAYS AGO
WWJ News Radio

WWJ’s Dr. Deanna Lites reports there are are some people, in metro Detroit and elsewhere, who are deliberately trying to catch the highly contagious Omicron variant by hanging around infected people.
PUBLIC HEALTH・1 HOUR AGO
WWJ News Radio

A 28-year-old Roseville woman is facing possible charges after allegedly pulling out a gun and racking a round into the chamber during a road rage incident on I-94 Saturday night.
ROSEVILLE, MI・2 DAYS AGO