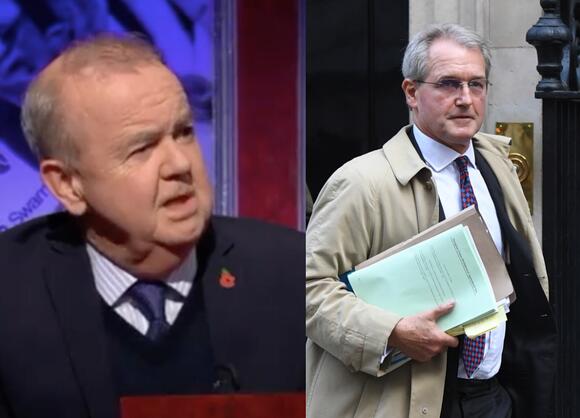 Have I Got News For You captain and Private Eye editor Ian Hislop has taken the Tory government to task on the Owen Paterson scandal that has dominated the headlines this week.

Speaking during Friday night’s edition of the panel show, Hislop branded the actions of the government “disgraceful” as they attempted to “cover up the misdeeds of one of their own Tory MPs. and to undermine democracy, transparency and accountability.”

On Wednesday, Tory MPs brought forward an amendment to a motion approved by the Standards Committee that Paterson been suspended and face a possible by-election after he was deemed to have lobbied ministers on behalf of two companies for £100,000-a-year.

The government voted through the amendment which would have seen Paterson avoid the suspension. However, the backlash to this move was so vitriolic that the government immediately u-turned the next morning and by the end of Thursday Paterson had resigned.

Tearing into the entire debacle, Hislop, after briefly explaining what Paterson had done added: “All his Tory mates started a campaign and the prime minister said ‘oh right, we’re changing the entire system now’. He was going to be suspended for 30 days and they said ‘no, he’s not’ and all the Tory MPs voted it through.

“They should all be ashamed of themselves, it’s absolutely disgraceful.”

Continuing he said: “Basically they said: ‘If you continue to criticise us we’re going to change the system.’ It was really quite shocking.

He concluded by hypothesizing why he thinks Boris Johnson whipped the Tories into voting for the amendment: “I think because the parliamentary commissioner for standards had looked into the prime minister’s free holiday in Mustique, so I think it might have been an act of revenge, I can’t prove that but I’m going to say it anyway.”

Hislop’s succinct breakdown of the events of the last few days in UK politics has been widely praised.

Elsewhere, the scandal and why it has generated so much anger was also dragged over coals firstly by LBC’s James O’Brien who believes that the Tories ‘Get Brexit Done’ slogan left a lot of people blindfolded and then by former PM John Major who accused Boris Johnson of “trashing the reputation of parliament.”

The government has finally passed its anti-strike bill, and it continues to prove controversial.So much so that even Jacob Rees-Mogg has come out against it in part, calling the bill "badly written" and "an extreme example of bad practice" during the pre-vote commons debate, as reported by Sky News.The bill will set minimum service levels set for fire, ambulance and rail services for when the sectors go on strike. MPs voted 315 to 246 meaning it will now face scrutiny in the House of Lords.Rees-Mogg said he was a "supporter" of the proposed law's aims, but added "it is a...
1 DAY AGO
Indy100

A Tory minister was left licking her wounds after Kay Burley expertly shut her down in an interview about Nadhim Zahawi.Helen Whately was the latest MP to be dragged out to defend the government to the media this morning, after prime minister Rishi Sunak sacked Zahawi over his tax scandal on Sunday.But she probably wished she has stayed in bed when she arrived at the Sky News studio and had a very tense exchange with Burley.The presenter put it to Whateley that Sunak should have acted sooner, and said people were aware of Zahawi's dodgy tax affairs.She questioned why civil...
2 DAYS AGO
Business Insider

Fox News host Tucker Carlson compared Justin Trudeau to Fidel Castro and said he was "completely in favor of a Bay of Pigs operation" in Canada.
2 DAYS AGO
Newsweek

"There is no other way to talk to these fools," State Duma member and former military commander Andrey Gurulyov said.
1 DAY AGO
Indy100

Nadhim Zahawi has ruffled people's feathers.Not only was it determined that the former Tory party chairman broke ministerial rules by repeatedly failing to declare the now notorious HMRC investigation into his tax affairs that left him coughing up £5m, but his apology for doing so was pretty weak.Zahawi was sacked as chairman of the party following an investigation by the prime minister's new ethics adviser, Sir Laurie Magnus and prime minister Rishi Sunak sent him a letter informing him about it.Sunak wrote that his ethics adviser had concluded there was a “serious breach” of the ministerial code. “As a result,...
2 DAYS AGO
Indy100

Gone are the days when Carol Vorderman was sorting out sums on Countdown, now the TV host and author is summing up the state of the Tory government on a regular basis – and people are absolutely loving it.So, as Vorders becomes the latest anti-Tory icon, we’ve rounded up some of her most brutal critiques of the Conservatives she’s shared over on her Twitter account – you’re welcome.“The Tory party is morally corrupt” \u201cPARTYGATE TURNS TO RENTGATE\nBoris Johnson living in donor's \u00a320m home\nThe Tory party is morally corrupt. \nLies, violation of our NHS,...
1 DAY AGO
Indy100

Boris Johnson has faced the wrath of social media for posting a video banging on about Brexit.Over on Twitter, he asked people to remember the vaccine rollout and said it was due to the work of "great companies" but also because "we'd taken back control" of the MHRA meaning the vaccine could be approved "faster than any other European country" giving us "a crucial edge".“So today, on Brexit Day, as we look back at that vaccine roll-out, let’s also look forward to all the other ways in which we can change our country and our economy for the better," he...
7 HOURS AGO
Indy100

Every time Rishi Sunak struggled to act 'decisively’ while in government

It’s been just over 100 days now since Rishi Sunak spoke of having “integrity, professionalism and accountability at every level” of his government as prime minister, and amid all the scandals which have happened in January alone, we’re sure he’s delivering on that promise.Honest.On Monday, after sacking Nadhim Zahawi as a minister without portfolio and Conservative Party chairman the day before, Mr Sunak said during a visit to County Durham that he was able to make “a very quick decision” in that it was “no longer appropriate” for Mr Zahawi to remain in government.“It relates to things that happened well...
1 DAY AGO
Indy100

Boris Johnson has revealed a terrifying warning he once received from Vladimir Putin.Speaking on a BBC documentary about the Russian leader, Putin Vs the West, the former prime minister claimed Putin threatened him with a missile strike in an "extraordinary" phone call prior to Russia's invasion of Ukraine.He said Putin told him it "would only take a minute" after he warned war would be an "utter catastrophe" that would lead to Western sanctions and more Nato troops on Russia's borders.Johnson said: "He threatened me at one point, and he said, 'Boris, I don't want to hurt you but, with a...
2 DAYS AGO
Indy100

Rishi Sunak may have sacked Nadhim Zahawi over the weekend, but it’s not over yet for the PM. Sunak fired the Conservative Party chairman early on Sunday morning, shortly after an ethics inquiry into Zahawi found that he had committed a “serious breach” of the ministerial code in the handling of his tax affairs. His departure comes more than six months after The Independent first revealed details of an HMRC investigation into Mr Zahawi’s tax affairs. The former chancellor – who is now facing calls to resign his seat as an MP – did not apologise for his handling of his...
2 DAYS AGO
Indy100

Nadhim Zahawi has responded to Rishi Sunak sacking him from the cabinet.Zahawi was sacked as chairman of the party following an investigation by the prime minister's new ethics adviser, Sir Laurie Magnus, which concluded that Zahawi had broken the rules by repeatedly failing to declare the now notorious HMRC investigation into his tax affairs that left him coughing up £5m.Sunak wrote that his ethics adviser had concluded there was a “serious breach” of the ministerial code. “As a result, I have informed you of my decision to remove you from your position,” he wrote.In response, rather than showing contrition, Zahawi...
2 DAYS AGO
Indy100

13 terrible things that have happened due to Brexit, that Brexiteers promised wouldn’t happen

The day was 23 June 2016. It was warm. It was a Thursday. All around the country, people nipped to polling stations to decide whether they wanted Britain to remain in the European Union – as it had for over 40 years – or go it alone. And as people woke up to go to work the following day, they did so to the news that Britain’s international relations with its closest neighbours would be changing irreversibly.“F***”, said 48 per cent of Brits. “Yay”, said the other 52 per cent.Of course, those who pushed for Britain to leave the EU...
23 HOURS AGO
Indy100

What is the government's new anti-strike bill and how will it impact you?

MPs have just backed controversial new legislation known colloquially as the 'anti-strike bill'.MPs last night voted 315 to 246 in favour of the bill which sets minimum service levels for certain industries when those sectors go on strike with workers facing the sack if they refuse.Sign up to our free Indy100 weekly newsletterBusiness secretary Grant Shapps has said it will "restore balance" and union bosses have called it "dangerous" but what does it involve?Here's everything you need to know about the legislation:What is in the bill?The bill gives ministers the power to set minimum service levels for fire, ambulance and...
1 DAY AGO
Indy100

Ex-health secretary turned I’m A Celebrity star Matt Hancock (no, we still can’t believe it either) is continuing to appear on TV stressing how sorry he is for breaking Covid rules, and continuing to make a fool of himself in the process.Mr Hancock, who’s back in the news again after very generously donating just three per cent of his £320,000 fee from I’m A Celebrity to charity, went on Good Morning Britain on Tuesday to defend himself – and it went about as well as you’d expect.In fact, even before he was asked his first question, Mr Hancock was being...
5 HOURS AGO
Indy100

Richard Madeley is having successive blunders with union representatives and they are making people cringe.It started yesterday when he clashed with Matt Wrack, the general secretary of the Fire Brigades Union when discussing their role in the ongoing strikes.Madeley questioned why fire workers should be able to strike when the police can't.Wrack calmly explained that firefighters are "civilian workers" so have the same rights as people from other industries who strike, unlike the police who have "specifical legal" frameworks preventing them from unionising.Sign up to our free Indy100 weekly newsletter \u201c\ud83d\udc4f @MattWrack just...
44 MINUTES AGO
Indy100

Enniskillen woman gets award from PM for initiative to combat loneliness

An Enniskillen woman who has helped 12,000 isolated people receive an act of kindness has received Prime Minister Rishi Sunak’s daily Points of Light award.Nuala O’Toole set up the Kindness Postbox scheme during the pandemic to link local school children with isolated residents, sending letters, cards and artwork via a postbox located in their school.The scheme was so popular that there are now 23 Kindness Postbox groups and 50 postboxes across Northern Ireland, as well as an international group set up in Australia.Over the Christmas period, more than 3,000 cards and letters were sent to combat loneliness.Last year Ms O’Toole...
1 DAY AGO