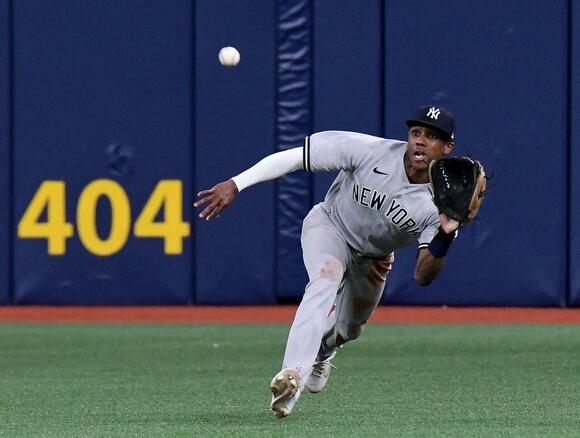 According to multiple reports, the Pirates have picked up a former New York Yankees outfielder off waivers.

Allen played in 15 games for the Yankees last year, hitting .270 in 49 plate appearances with 10 hits.

Four of those hits were doubles and one was a triple. He had two RBI, walked five times and went 5-for-5 in stolen base attempts.

Picked in the 6 th round of the 2014 MLB draft by Cleveland, Allen debuted for the now Guardians in 2017.

BOSTON (CBS) — It wouldn’t be Hall of Fame season if a member of the baseball media wasn’t twisting himself into a pretzel for all the world to see. Enter Jack Curry of the Yankees’ broadcast network. Curry revealed his ballot on Tuesday, which is the day that the Baseball Hall of Fame will announce which players — if any — will earn enshrinement this year. Curry used eight of his allowable 10 votes this year, and for the first time in their 10 years of eligibility, Barry Bonds and Roger Clemens received his vote. The reason Curry hadn’t voted for Bonds and...
MLB・2 DAYS AGO
USA TODAY

"You can make a case that he's the best player to ever play," Jim Leyland said of Barry Bonds, whom he managed with the Pittsburgh Pirates.
MLB・1 DAY AGO
bronxpinstripes.com

The Yankees have more retired numbers adorning Monument Park than any other franchise in MLB. As we explored recently at Bronx Pinstripes, there isn’t always a method to the retired-number madness. We all know the stats and stories surrounding numbers 3, 4, 5, and 7, but what about everybody else?
MLB・2 DAYS AGO
93.7 The Fan

He was a member of the 1971 World Series Championship team and was played center field along with eight other teammates of color in 1971. It was the first time in MLB history that happened.
MLB・11 HOURS AGO

Alex Rodriguez, a three-time MVP whose 696 home runs trail only Barry Bonds, Hank Aaron and Babe Ruth, received just 34.3% of the votes in his debut.
MLB・2 DAYS AGO
Audacy

MLB Network’s Rob Parker did not vote for David Ortiz citing a gray area with PEDs, but he voted for Barry Bonds, Roger Clemens and Sammy Sosa, leading to one of his colleagues to call him out.
MLB・2 DAYS AGO
WEEI Sports Radio

David Ortiz was voted into the Baseball Hall of Fame Tuesday, while Barry Bonds and Roger Clemens were shut out. That’s total insanity. They should all be in.
MLB・1 DAY AGO
Inside The Dodgers

The 2021 season was one heck of a roller coaster for Max Muncy. The slugging first baseman carried the Dodgers in the first half with his bat, which resulted in him being in early MVP conversations.  But that first half was short-lived as Muncy came tumbling back to earth in the second half, ...
MLB・1 DAY AGO

Will the Atlanta Braves be able to sign Freddie Freeman? Will Major League Baseball play 162 games this year? What is the big hold up in the MLB negotiations?
MLB・2 DAYS AGO
iheart.com

Ronnie & TKras w/ Zac Blobner This Morning: The Bucs have a lot on their plate to deal with, despite being out of the NFL Playoffs after losing to the Rams last Sunday. From Tom Brady on Instagram saying "Thank You", to OC Byron Leftwich unofficially heading to Jacksonville to coach the Jags, to Antonio Brown going on HBO and threatening to sue the team... it's, A LOT. Bucs Radio Voice Dave Moore & Pewter Report's Jon Ledyard help us break it all down, oh AND Saints HC Sean Payton stepping away from New Orleans in there too. Plus, the Bolts back home vs the Devils tomorrow, as Bally Sports Lightning TV Voice Dave Randorf calls the show w/ a bone to pick about Jon Cooper getting shafted by the NHL. Zac handles What's Up Tampa Bay w/ Wacky Turtle News & a game of Would You Rather on the MLB Hall of Fame ONLY inducting Red Sox Legend David Ortiz while shelving Barry Bonds' chances for the final time...
NFL・1 DAY AGO
The Blade

Jim Leyland has never been one to mince words or withhold opinions, and the Perrysburg native and former big league manager on Wednesday was predictably critical of the decision to keep Barry Bonds out of the National Baseball Hall of Fame.
MLB・1 DAY AGO
Sports Illustrated

The two sides met on Tuesday, marking the second consecutive day of discussions between the parties.
MLB・2 DAYS AGO

Barry Bonds, Roger Clemens, Todd Helton, David Ortiz, Andy Pettitte, Manny Ramirez, Alex Rodriguez, Scott Rolen, Curt Schilling, Sammy Sosa — My ballot for the National Baseball Hall of Fame Class of 2022. The Hall of Fame is now right where it wanted to be in 2014, when it changed the eligibility for players on the writer’s ballot from 15 years to 10. Barry Bonds, Roger Clemens and Sammy Sosa, stars of Major League Baseball’s so-called steroid era, are now off the Baseball Writers of America Association ballot five years before they otherwise would have been. For the 10th consecutive year, the...
MLB・2 DAYS AGO
93.7 The Fan

Just under 24 hours after the National Baseball Hall of Fame announced that Boston Red Sox legend David Ortiz will be the only new inductee, a lot of conversation was made regarding the fate of a few players.
MLB・1 DAY AGO
97.1 The Ticket

The Tigers spent about $225 million this offseason on Javy Baez, Eduardo Rodriguez and Tucker Barnhart. They’ll join a core of young talent in Detroit.
MLB・2 DAYS AGO
Chicago Tribune

The Chicago White Sox announced the signings of international outfielders Oscar Colás ($2.7 million) and Erick Hernández ($1 million) on Tuesday. Both players are ranked in the top 30 international prospects according to MLB Pipeline, with Colás No. 5 and Hernández No. 28. “We feel very good with what we were able to accomplish this year,” said Marco Paddy, White Sox special assistant to the ...
MLB・2 DAYS AGO
Audacy

BOSTON (CBS) — Like the rest of Major League Baseball, the Red Sox are in a holding pattern as the league and the MLBPA try to end the current lockout. But when the lockout does end, the Red Sox may make a huge free agent splash. The Red Sox are the favorites to sign Japanese superstar Seiya Suzuki when MLB gets back up and running, according to a report from Yahoo Japan. There is a conflicting report by Nikkan Sports, however, that says that Suzuki has narrowed his list of teams down to three or four — the Mariners, Cubs, Giants...
MLB・1 DAY AGO
Audacy

Did rules enacted in response to a stunt pulled by former Miami Herald writer Dan Le Batard prevent Roger Clemens and Barry Bonds from making the Baseball Hall of Fame?
MLB・1 DAY AGO
Inside The Phillies

How Ortiz's Hall of Fame Career Made Me Love Baseball

Big Papi has been elected into the National Baseball Hall of Fame. Red Sox fans will never forget the impact he made on their love for the game, the team, and the city of Boston.
MLB・1 DAY AGO