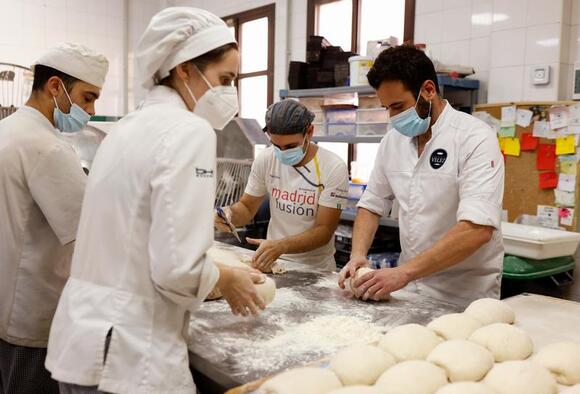 SEVILLE (Reuters) - A Spaniard crowned world baking champion this year has appealed to his government to lower taxes on electricity or risk putting artisans such as himself out of business amid a global energy crunch that is wiping out their margins.

Domi Velez, 44, beat contestants from around the world to take the crown, wowing judges in Munich with novelties including cobalt-hued butterfly pea-infused breads and reviving ancient breadmaking techniques used in Roman times.

Velez is the fifth generation of a line of bakers that began 120 years ago with his great-great-grandfather. He now runs artisan bakery Velez’s Oven, employing 12 people and producing 33 different kinds of bread, in the southern Spanish city of Lebrija near Seville.

Now, however, Velez says his promising operation may be undermined by soaring global energy costs and decades-high inflation in Spain. His electricity bills have doubled to 2,000 euros ($2,310) a month, the cost of cereals for his loaves have jumped this month for the third time this year, and surging fuel price rises have hit delivery costs.

“We do not have the means to be able to counteract this type of rise and we end up having to raise the cost of the product, with all that implies,” he said.

“It’s another spanner in the works of the artisan. We are a family business and don’t have much economic muscle.”

He called on the Spanish government to consider lowering taxes on electricity further. “It should be lowered more for all consumers, for the common good,” he said.

The government in September announced caps on gas prices and cut its special electricity tax to 0.5% from 5.1% to mitigate the impact of rising energy prices on consumers.

But some of the steps have yet to be reflected in bills, and with winter approaching, resulting in a likely spike in energy demand, some consumer groups calling for further tax cuts tied to household income.

LONDON, Jan 25 (Reuters) - Europe’s gas inventories are likely to be sufficient to avoid a disruption to gas supplies and power generation before the end of winter, provided there is no sustained interruption of pipeline gas imports from Russia. The structure of futures prices implies traders currently see...
ENERGY INDUSTRY・10 MINUTES AGO
The Motley Fool

Solar stocks are down big in the last few months, which could present some opportunities for investors.
INDUSTRY・3 HOURS AGO
wri.org

Electricity, natural gas and oil prices have risen globally in recent months, causing hardship for many people around the world. Europe is at the center of the crisis, with natural gas prices increasing 400% last year, raising household bills and putting multiple energy companies out of business. Other countries like...
ENERGY INDUSTRY・1 DAY AGO
olivemagazine.com

(Family Features) Whether you’re a runner, a workout warrior or simply looking for a quick pick-me-up before heading to the office, grab-and-go foods can supply the energy you need for an active day. Skipping salty snacks and opting for nutritious options can put you ahead of the game. Due...
RECIPES・10 DAYS AGO
foodservicedirector.com

The matter isn't settled because of pending deliberations at the circuit-court level, but the nation's highest court said it anticipates the requirement to be shot down. With frigid temperatures and snow blanketing a large part of the country, it’s a good time to light up those ovens and start baking. These five recipes will warm up the kitchen and make a comforting addition to the menu.
RECIPES・12 DAYS AGO
MySanAntonio

Soaring energy prices are putting the squeeze on European consumers desperate for some relief after two years of coronavirus, lockdowns and job worries. The financial pain is taking a toll on households, who are more worried about prices than at any time this century, and feel less inclined to splurge, according to a European Commission survey. If demand suffers as a result, that has implications for how quickly the economy can fully recover from the destruction wrought by the pandemic.
ENERGY INDUSTRY・13 DAYS AGO
Seekingalpha.com

Investors are trying to size up Domino's Pizza (DPZ +0.7%) after the company's ICR appearance and guidance update led to some selling pressure earlier in the week. Domino's CEO Richard Allison said that the chain does not expect a letup in inflation pressures and highlighted a plan to shift the $7.99 carry-out value platform to online and cut the size of the $7.99 chicken wing offering from 10 pieces to 8 pieces. Cowen analyst Andrew Charles notes that DPZ believes this will best optimize the variables of order count, total revenue and franchisee profitability.
RESTAURANTS・13 DAYS AGO

Hold on to your wallet. Due to inflation and prices surging for natural gas, heating oil, and other fuels, you will see a significant rise in your bills this winter. So if you've already opened your...
ENERGY INDUSTRY・1 DAY AGO
The Independent

Europe could be hit by electricity blackouts in the next few months if average temperatures fall, energy experts have warned.Analysts at investment bank Goldman Sachs said that Europe has enough gas stored up to get through winter, but if temperatures were to drop, leading to an increase in demand, storage could fall below the record lows seen in 2018.If this happens “electricity blackouts (are) likely,” the bank’s analysts said.It also warned that even if Russia ramps up its supplies to the region, north west Europe is likely to see gas prices at around double their normal levels.This is before taking...
ENERGY INDUSTRY・1 DAY AGO
Reuters

(Reuters) - Britain should consider more support for the poorest households which will face a big increase in their energy bills when regulated prices rise in April, the International Monetary Fund said on Tuesday. “Very targeted, well-targeted support is important,” IMF Deputy Managing Director Gita Gopinath said at a news...
ENERGY INDUSTRY・1 HOUR AGO
The Independent

Floating offshore wind projects are to receive a share of £31 million Government funding to help drive deployment of the clean technology.Some 11 successful projects are receiving a share of the money which is matched by more than £30 million from industry, to boost the sector by £60 million, the Business Department (Beis) said.The funding, of up to £10 million per project, aims to support research and development of technology for floating offshore wind, and bring down the costs of building and deploying the renewable power source more quickly.The Government said that with global gas prices at record highs, it...
ENERGY INDUSTRY・16 HOURS AGO
ABC7

Jan 25 (Reuters) - Hess Corp (HES.N) said on Tuesday it expects a 37% jump in capital spending for exploration and production this year, as the oil company looks to focus on operations in Guyana and the U.S. Bakken shale basin. Global crude prices have risen by more than 50%...
INDUSTRY・1 HOUR AGO
The Guardian

David Cameron’s promise in 2013 to “cut the green crap” will cost millions of households around £170 each when energy prices spike this spring, a new report has claimed.Analysis from the Energy and Climate Intelligence Unit (ECIU) showed that households could have saved a combined £1.5 billion in the next financial year if insulation continued to be installed at the same rate as a decade ago.In 2012, around 2.3 million homes added new insulation, but since 2013 this has collapsed to just around 230,000 homes, ECIU said.“The rate of insulating homes has crashed since 2012 through cut backs on helping...
ENERGY INDUSTRY・1 DAY AGO
minimalistbaker.com

Okay friends, there’s a new energy bite in town and it’s on major repeat in our kitchen. It’s no secret that we love cardamom (hello, chai!) and orange (juice, anyone?), but when we combined them with our Salted Cashew Caramel Energy Bites, something magical happened, and the Orange Cardamom Energy Bite was born! (Happy birthday, bites!)
FOOD & DRINKS・1 DAY AGO
culinarybackstreets.com

Legumes have been at the core of the Greek diet since antiquity, with chickpeas being especially popular. We find references to them, and the ways they were cooked, in the works of several ancient writers and poets, including Homer, whose epic poems provide insight into the eating and cooking habits of the time (roughly the 8th century B.C.).
RECIPES・4 DAYS AGO
Reuters

PARIS, Jan 25 (Reuters) - France is to increase by 10% the tax reduction on transport costs available for people who need to travel for their work, in response to rising fuel prices, French Prime Minister Jean Castex said on Tuesday in parliament. (Reporting by Tassilo Hummel; Writing by Christian Lowe; Editing by Alex Richardson)
INDUSTRY・2 HOURS AGO
Reuters

LONDON, Jan 25 (Reuters) - The International Monetary Fund cut its forecast for British economic growth this year due to disruption from the Omicron variant of the coronavirus, labour shortages and high energy prices, but raised its estimate for growth in 2023. The IMF said it now expected British gross...
ENERGY INDUSTRY・50 MINUTES AGO