Could a Diekman and Phillies Reunion Be Brewing? 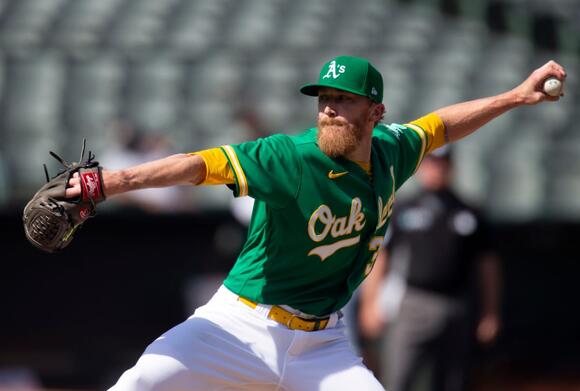 Relief pitcher Jake Diekman is now a free agent, could a reunion between him and the Philadelphia Phillies be in the cards?

Relief pitcher Jake Diekman had his 2022 option declined by the Oakland Athletics on Thursday per a statement from the MLB Players Association . Diekman was due $4 million in 2022, and instead the Athletics decided to pay him a $750K buyout.

Now that Diekman is a free agent, there will be many teams looking to acquire the services of the 34-year-old who posted a 3.86 ERA over 60.2 IP in 2021. One of those franchises could be the Philadelphia Phillies who not only need veteran bullpen help, but are also familiar with Diekman.

In 2007, the Phillies drafted Diekman in the 30th round of the MLB draft. He made his MLB debut for Philadelphia during the 2012 season and posted four and a half good seasons for the Phils before being traded along with Cole Hamels to the Texas Rangers in 2015.

Since that trade, he has pitched for the Rangers, Arizona Diamondbacks, Kansas City Royals, and the Athletics.

A reunion with the Phillies makes sense after Cam Bedrosian, Archie Bradley, Ian Kennedy, and Hector Neris all have elected free agency. Diekman, while not a closer, could help bring veteran stability to the backend of the bullpen.

Additionally, he proved in the 2021 season that he still has the stuff to be successful at the major league level after a few down seasons. He has dealt with Ulcerative Colitis in the past, but following a successful surgery seems to be back on track.

Bringing back Diekman could also produce some nostalgia for the franchise who is in desperate need of a veteran in the bullpen who can help elicit memories from their last playoff run. Even though Diekman was in the Phillies' minor league system when Philadelphia last made the postseason, he was still a part of the family.

Diekman will likely be had on a one-year deal for a relatively cheap cost. The Phillies need to explore the possibility, even if it may not be the flashiest move.

A new change will be implemented in the upcoming minor league season.
MLB・2 DAYS AGO
Inside The Phillies

After a disappointing 2021 campaign, what are the Phillies' options with Didi Gregorius?
MLB・2 DAYS AGO
Inside The Phillies

Jean Segura doesn't put up flashy numbers or make dazzling defensive plays, but all together he is one of the most well-rounded players in the National League.
MLB・1 DAY AGO
Inside The Phillies

Alec Bohm was one of the league's worst fielders in 2021. As trade rumors swirl this offseason, it would mean a lot for the Phillies if Bohm could put a hammerlock on his natural position.
MLB・1 DAY AGO

The Dodgers catcher explained how he approaches the highs and lows of a MLB season.
MLB・2 DAYS AGO
Sam Britt

Welcome to The Philly Four, a daily recap of four of the top stories from the Philadelphia area, covering everything from local government to the Phillies bullpen. A one-stop shop for the most important news bites in the City of Brotherly Love.
PHILADELPHIA, PA・11 DAYS AGO

Roger Clemens, the seven-time Cy Young winner, is in his final year of eligibility on the Hall of Fame ballot.
MLB・20 HOURS AGO
USA TODAY

Three weeks from when pitchers and catchers usually report and no one knows when spring training will start or if it will be a truncated schedule.
MLB・1 DAY AGO
Inside The Blue Jays

Ahead of the January 25th Baseball Hall of Fame announcement, we look at five former Blue Jays on the ballot and their chances at induction
MLB・1 DAY AGO
USA TODAY

The two sides are starting to step up the pace of their meetings.
MLB・14 HOURS AGO
Inside The Phillies

Five years after signing on as Phillies general manager, Matt Klentak has accepted a job as special assistant for the Milwaukee Brewers.
MLB・19 HOURS AGO
Inside The Dodgers

The MLB and MLBPA are set to meet on Monday to continue CBA negotiations.
MLB・1 DAY AGO
The Baltimore Sun

In less than a month, Orioles pitchers and catchers are scheduled to report to Sarasota, Florida, to mark the start of spring training. Yet, there remains uncertainty as to whether that will happen as planned with the league’s owners continuing to lock out the players as the two sides plod toward a new collective bargaining agreement. But as the lockout marches on, so too does Oriole of the ...
MLB・1 DAY AGO
Inside The Blue Jays

Carter's fiery demeanor got him noticed by Blue Jays scouts. Now it's his humility off the field that's impacting the city of Toronto.
MLB・22 HOURS AGO
Inside The Royals

The Kansas City Royals drafted pitcher Ben Hernandez fresh out of high school in 2020, but he could display quite a bit of maturity and growth just two years later.
MLB・2 DAYS AGO
Inside The Dodgers

If there is a Major League season, the Mets are expected to be serious contenders.
MLB・8 HOURS AGO