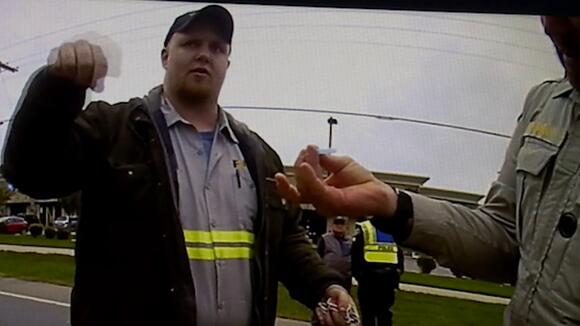 SPRING HILL, Tenn. (WKRN) — A gasoline tanker driver in Spring Hill was arrested after driving his big rig across the double yellow line into oncoming traffic.

It happened on Highway 31, one of the busiest streets in Spring Hill, Wednesday morning just before 8 a.m.

According to investigators, the road was packed with cars when the gas tanker, carrying 9000 gallons of flammable liquid, crossed over the center lane into oncoming traffic.

The truck crushed at least two cars in the opposite lane of traffic. A Chevrolet Suburban and Hyundai Sonata sustained the most damage.

Police say a 46-year-old woman in the Suburban sustained a minor injury. The 10-year-old boy in that vehicle was not hurt.

“He couldn’t stay between the lines. I said, ‘something’s wrong,'” one witness told police at the scene.

“He’s setting up in the cab right now nodding off,” said an officer at the scene. “He was like this falling over in the seat.”

Police checked the driver and ruled out medical issues. That’s when the 28-year-old underwent a field sobriety test, which police say Wright failed.

On the bodycam video, a Williamson County deputy can be seen searching Wright. He pulled out what investigators say were two straws.

“Why are you getting defensive over a straw?” the deputy asked Wright.

“It looks bad, like, you know, it really does, like, there’s nothing bad or anything,” Wright responded

Because Wright was suspected of using an opioid, a Spring Hill undercover agent reported to the scene.

“I observed pinpoint pupils which is indicative of opioid use,” a deputy said. “He said he had taken prescription drugs in the past.”

On the bodycam video, deputies continued to ask questions about the straws they discovered.

Deputy: “You see there’s powder residue in there?”

Wright: “I don’t know why there’s powder residue. When I have the straws or anything, I’m mixing like chocolate like milk or anything like that sir. But that’s as far as I know sir.”

Deputy: “So, you have not used this to snort anything?”

Deputy: “So, why do you have a short straw in your pocket?”

Wright then indicated it was just a straw and it was trash.

Deputy: “It’s not trash. It’s got powder residue. Which means someone’s been snorting something through this straw.”

A Spring Hill police officer also had an interaction with Wright.

Officer: “So, you realize you are driving a 65,000-pound bullet down the road. Do you realize how dangerous that is?”

Wright: “Why do you think I was crying. That’s why I am glad that I slowed down as much as I did.”

“He seems to be very remorseful, but with him having a commercial driver’s license or CDL, it’s imperative that they have to be sober,” one investigator told News 2.

Wright is charged with DUI and reckless endangerment. He is in jail on a $10,000 bond.

Spring Hill Police told News 2, the driver was fired from the trucking company where he worked.

An icy ramp in Spring Hill was the Wednesday morning site of three crashed cars and one serious injury.
SPRING HILL, TN・10 HOURS AGO
WKRN News 2

One teen caught, another on the run after escaping juvenile facility on Stewarts Ferry Pike

Metro police have captured one teen and are still searching for another teen who both escaped from a youth facility center Tuesday night.
NASHVILLE, TN・21 HOURS AGO
WKRN News 2

Semi carrying 72K lbs. of tires catches fire on I-65 in Marshall County

One dead, one in critical condition following Crowe Drive shooting

Detectives are reportedly looking into a potential drug motive behind a shooting at an abandoned Crowe Drive home on Tuesday, which killed one man and injured another.
NASHVILLE, TN・14 HOURS AGO
WKRN News 2

The device helps control traffic and signal drivers when pedestrians are trying to cross the street safely.
NASHVILLE, TN・5 HOURS AGO
WKRN News 2

It was a chaotic bus ride in Robertson County after a smoke device went off.
ROBERTSON COUNTY, TN・1 DAY AGO
WKRN News 2

After weeks on the run, an alleged shooter has been taken into custody in Davidson County.
NASHVILLE, TN・1 DAY AGO
WKRN News 2

A convicted felon is back behind bars thanks to a new finger printing device being used by the La Vergne Police Department.
LA VERGNE, TN・1 DAY AGO
WKRN News 2

A heartbreaking return to work this morning for one Nashville businessman. His beloved collectible card shop in South Nashville caught fire and badly damaged, leaving him to wonder what's next.
NASHVILLE, TN・6 HOURS AGO
WKRN News 2

Michael Wellington, 50, was reported missing on Jan. 29, but police say he has not been heard from or seen since Jan. 21.
CLARKSVILLE, TN・10 HOURS AGO
WKRN News 2

The NAACP said the man could have been causing a public safety issue by waving a gun and threatening people, but the department needs to consider mental health as a contributing factor.
NASHVILLE, TN・1 DAY AGO
WKRN News 2

A man who was reported missing in Spring Hill was found dead by apparent suicide, according to police.
SPRING HILL, TN・2 DAYS AGO
WKRN News 2

Three people wanted for crimes that are "violent in nature" were added to Nashville's "Top 10 Most Wanted" list this week, including a man accused of murdering his roommate.
NASHVILLE, TN・14 HOURS AGO
WKRN News 2

Several days after Jamal Moore -- an author, entrepreneur, and lover of life -- was found dead in East Nashville, News 2 spoke with his friends about how they'll remember him.
NASHVILLE, TN・8 HOURS AGO
WKRN News 2

Councilwoman Joy Styles was happy to hear police made an arrest over the weekend.
NASHVILLE, TN・2 DAYS AGO
WKRN News 2

The hardest hit areas in Tuesday night‘s ice storm were north and west of Nashville where some 6,900 customers lost power in Sumner, Robertson, Cheatham, Montgomery and Stewart counties.
NASHVILLE, TN・9 HOURS AGO