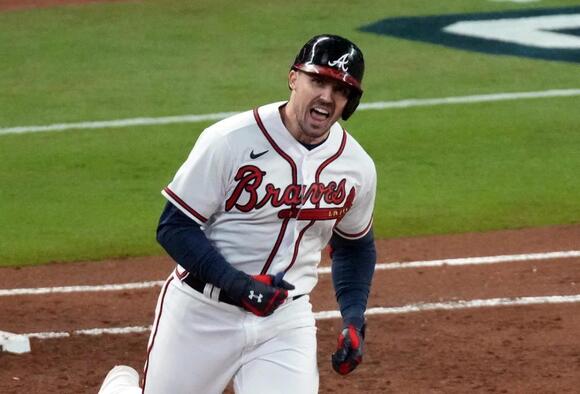 After helping the Atlanta Braves win their first World Series title in 26 years, outfielder Adam Duvall declined his side of a 2022 mutual contract option with the club, the Miami Herald reported.

The decision does not yet signal Duvall’s departure, since he is not eligible for free agency and is now arbitration eligible. The move did activate a $3 million contract buyout on what would have been a $7 million salary in 2022.

Multiple projections have Duvall potentially coming back to the Braves next season for at least $9 million on a one-year deal, with the opportunity to work out a long-term contract. If the Braves elected to non-tender Duvall, he would then move to free agency.

Duvall, 33, joined the Braves at the trade deadline from the Miami Marlins in the midst of a down season. He came to life in Atlanta, hitting 16 home runs with 45 RBIs in 55 games down the stretch following the trade.

In the World Series against the Houston Astros, Duvall hit a home run in a Game 1 victory and added a grand slam in Game 5 that gave Atlanta the early lead of an eventual defeat. He went 1-for-4 in Game 6 when the Braves wrapped up the title. 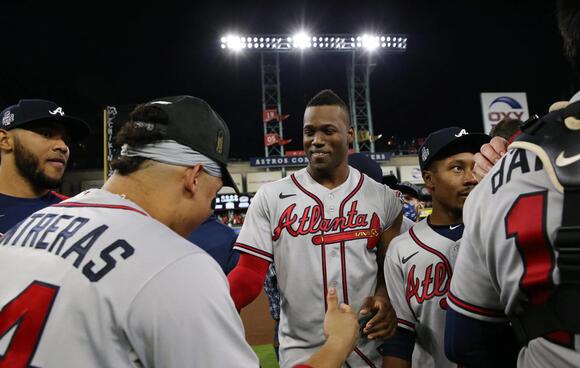 Atlanta Braves have signs of hope with Marcell Ozuna

Marcell Ozuna may be one of the biggest question marks of the upcoming season for the Atlanta Braves. He had struggled at the beginning of the 2021 season before missing the rest of the season due to injury and the investigation into his domestic violence arrest. Since he was essentially given time served by the league and is healthy once again, he will be a part of the picture from Opening Day forward.
MLB・1 DAY AGO
chattanoogacw.com

WLOS — The Atlanta Braves are packing up their World Series trophy and celebrating on the road with 151-stop throughout Braves Country to commemorate 151 years of Braves baseball. The tour features stops in Georgia, Alabama, Tennessee, Mississippi, South Carolina and North Carolina. Fans are invited to come out...
MLB・17 HOURS AGO
FanSided

Atlanta Braves Podcast S3E2: all of your baseball hot buttons

The Hall of Fame? HOF voting? How about labor disputes? While we await a resumption to the Atlanta Braves’ off-season activities, we’ve got some things to argue about. It’s my fault, really… the podcast is out late this week thanks to COVID effects and such, but at least we can talk about our Hall of Fame arguments — including why Atlanta Braves great Andruw Jones should be voted in — just prior to the announcement coming up Tuesday afternoon.
MLB・1 DAY AGO

On Tuesday night, the Hall of Fame voting for the 2022 class will be revealed. In honor of this special day, Cal Ripken Jr. named a player the MLB has “shortchanged” in balloting. Ripken made it known that he believes Don Mattingly should be in the Hall of...
MLB・13 HOURS AGO
USA TODAY

Alex Rodriguez, a three-time MVP whose 696 home runs trail only Barry Bonds, Hank Aaron and Babe Ruth, received just 34.3% of the votes in his debut.
MLB・7 HOURS AGO
CBS Boston

BOSTON (CBS) — It wouldn’t be Hall of Fame season if a member of the baseball media wasn’t twisting himself into a pretzel for all the world to see. Enter Jack Curry of the Yankees’ broadcast network. Curry revealed his ballot on Tuesday, which is the day that the Baseball Hall of Fame will announce which players — if any — will earn enshrinement this year. Curry used eight of his allowable 10 votes this year, and for the first time in their 10 years of eligibility, Barry Bonds and Roger Clemens received his vote. The reason Curry hadn’t voted for Bonds and...
MLB・12 HOURS AGO

Roger Clemens, the seven-time Cy Young winner, is in his final year of eligibility on the Hall of Fame ballot.
MLB・1 DAY AGO
Inside The Dodgers

Headed into the upcoming season with a new name and logos, Cleveland's Major League Baseball team had some decisions to make about the in-game gear. On Monday morning, the Cleveland Guardians released the official on-field hat players will wear in 2022.
MLB・1 DAY AGO
Audacy

Three weeks from when pitchers and catchers usually report and no one knows when spring training will start or if it will be a truncated schedule.
MLB・2 DAYS AGO
Inside The Blue Jays

Ahead of the January 25th Baseball Hall of Fame announcement, we look at five former Blue Jays on the ballot and their chances at induction
MLB・2 DAYS AGO
USA TODAY

Major League Baseball and the players union continued to make slow, incremental progress Tuesday, but they are still a long way from an agreement.
MLB・9 HOURS AGO
92.3 The Fan

Should MLB players from the steroid-era be allowed into the Hall of Fame? Jay Crawford says it does a disservice to the sport to ignore them. Hear why with Baskin and Phelps!
MLB・13 HOURS AGO
Dodgers Nation

The past couple of seasons has seen plenty of blown calls from MLB umpires that have swayed the outcome of games. Take the one-blown call against the Dodgers and Giants back in July of last season when a swing would have ended the game. Instead, it was called a non-swing which led to a walk and an eventual Giants win. Or we can look to game 5 of the NLDS where a check swing was another blown call that favored the Dodgers.
MLB・2 DAYS AGO
97.1 The Ticket

The Tigers spent about $225 million this offseason on Javy Baez, Eduardo Rodriguez and Tucker Barnhart. They’ll join a core of young talent in Detroit.
MLB・11 HOURS AGO
Inside The Dodgers

The MLB and MLBPA are set to meet on Monday to continue CBA negotiations.
MLB・2 DAYS AGO
Inside The Phillies

Jean Segura doesn't put up flashy numbers or make dazzling defensive plays, but all together he is one of the most well-rounded players in the National League.
MLB・2 DAYS AGO