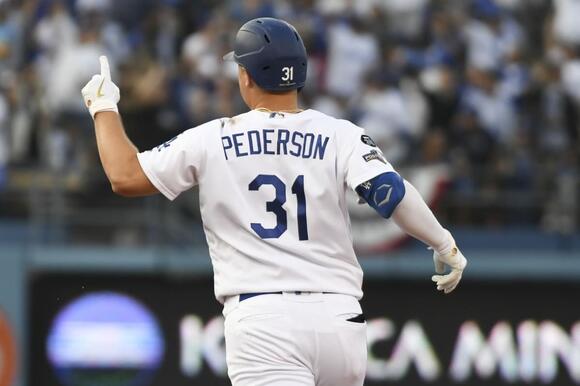 After the Dodgers won their first title in 32 years in 2020 and came into the 2021 season as favorites, things didn’t go their way much of the year despite winning 106 games. It was a bitter-sweet moment to see the Braves win the World Series against the Astros as it denied Houston of a title but it wasn’t the Dodgers who deprived them of it.

However, one Dodger was present to help take down the Astros as Joc Pederson was part of that Atlanta Braves team. That marks the second time that Joc has been crowned a champion and in back-to-back years with two different teams.

While it surely was surreal for him to win it all this year, he didn’t forget the first time he achieved glory with the Dodgers. In fact, some World Series photos captured Pederson sporting his Dodgers 2020 World Series ring while celebrating his new World Series title with the Braves.

Despite not joining Atlanta until the Trade Deadline, he played his part in turning the team around and firing them up for a postseason run. He hit a red hot .429 in the NLDS with 2 home runs and 5 RBI to help the team advance. While he cooled off in the NCLS and World Series, his bat helped the team get that far and his teammates picked up the slack.

Joc had mentioned before that he would’ve liked to return to LA, but the organization never offered him a deal . Still, that didn’t stop him and his former teammates from showing each other love. As some old teammates offered him luck and support against the Astros, he returned the favor by taking them down and wearing his 2020 WS ring. Congrats Joc!

Up Next: Trevor Bauer Will Reportedly Not Opt Out of Contract with Dodgers

Add video gaming to Betts' growing list of non-baseball interests.
MLB・2 DAYS AGO
Inside The Dodgers

The 2021 season was one heck of a roller coaster for Max Muncy. The slugging first baseman carried the Dodgers in the first half with his bat, which resulted in him being in early MVP conversations.  But that first half was short-lived as Muncy came tumbling back to earth in the second half, ...
MLB・13 HOURS AGO
FanSided

Though MLB and the MLBPA are closer than ever before in their attempt to resolve their CBA disagreement en route to a 2022 season (NOTE: still very far), the narrowing of the gap has only increased our desire to scheme and plot in order to help the Dodgers. After all,...
MLB・17 HOURS AGO
Sports Illustrated

In the mid-2000s, Andre Ethier helped launch a new era of success for the Dodgers organization. The outfielder made his debut in Los Angeles in 2006, when James Loney, Russell Martin, and Matt Kemp were also called up. He quickly established himself as one of the best up-and-coming players in the league.
MLB・2 DAYS AGO

Saturday’s UFC match at the Honda Center in Anaheim featured some big-time names in attendance. Some of those names included a current Dodger, a former Dodger and a (former/soon-to-be?) Dodger. Justin Turner, Kiké Hernandez and Joe Kelly were in attendance for the match. The three were on the Dodgers’...
UFC・2 DAYS AGO
Inside The Dodgers

Wally Bunker entered Game 3 of the World Series with a tough act to follow. Just two days after 20-year-old Jim Palmer bested Cy Young winner Sandy Koufax, Bunker made his own mark in the Fall Classic. Bunker went the distance in a shutout effort that brought the Orioles to...
MLB・19 HOURS AGO
Inside The Dodgers

There is a lot of debate among Dodgers fans of all eras about who the best pitcher in team history is. Who is the greatest Dodger pitcher between Sandy Koufax and Clayton Kershaw?  We can kick things off with Sandy Koufax. When he was at his best, Sandy Koufax was nearly untouchable with his ...
MLB・16 HOURS AGO

Alex Rodriguez, a three-time MVP whose 696 home runs trail only Barry Bonds, Hank Aaron and Babe Ruth, received just 34.3% of the votes in his debut.
MLB・1 DAY AGO
Audacy

MLB Network’s Rob Parker did not vote for David Ortiz citing a gray area with PEDs, but he voted for Barry Bonds, Roger Clemens and Sammy Sosa, leading to one of his colleagues to call him out.
MLB・1 DAY AGO
Sportsnaut

From a pure on-field standpoint, Barry Bonds is considered the most-feared hitter in the modern history of Major League Baseball.
MLB・1 DAY AGO
92.3 The Fan

Should MLB players from the steroid-era be allowed into the Hall of Fame? Jay Crawford says it does a disservice to the sport to ignore them. Hear why with Baskin and Phelps!
MLB・1 DAY AGO

Willie Mays has repeatedly called for Barry Bonds' induction into the baseball Hall of Fame. Now, the home run king is effectively shut out from inclusion in what many consider to be baseball's greatest honor.
MLB・20 HOURS AGO
CBS Boston

BOSTON (CBS) — It wouldn’t be Hall of Fame season if a member of the baseball media wasn’t twisting himself into a pretzel for all the world to see. Enter Jack Curry of the Yankees’ broadcast network. Curry revealed his ballot on Tuesday, which is the day that the Baseball Hall of Fame will announce which players — if any — will earn enshrinement this year. Curry used eight of his allowable 10 votes this year, and for the first time in their 10 years of eligibility, Barry Bonds and Roger Clemens received his vote. The reason Curry hadn’t voted for Bonds and...
MLB・1 DAY AGO
Audacy

Roger Clemens, the seven-time Cy Young winner, is in his final year of eligibility on the Hall of Fame ballot.
MLB・2 DAYS AGO
WEEI Sports Radio

David Ortiz was voted into the Baseball Hall of Fame Tuesday, while Barry Bonds and Roger Clemens were shut out. That’s total insanity. They should all be in.
MLB・18 HOURS AGO
CBS Philly

PHILADELPHIA (CBS) — A couple of Phillies greats will find out Tuesday night if they’ll get the call from the Baseball Hall of Fame. World Series Champions Jimmy Rollins and Ryan Howard are on the ballot for the first time. They need at least 75% of the votes in order to be immortalized forever in Cooperstown. The voting results will be announced at 6 p.m. on Tuesday.
MLB・1 DAY AGO
WFAN Sports Radio

Shortly after he was officially denied entry to the Baseball Hall of Fame on his tenth and final try, Roger Clemens issued a statement on Twitter verifying that he’s fine without the honor.
MLB・1 DAY AGO
Denver7 News KMGH

Todd Helton continued his climb toward immortality on Tuesday, inching closer to reaching the Hall of Fame.
MLB・1 DAY AGO