FRISCO - It is a play that, given all the notable plays that occurred in Sunday night’s notable 20-16 Dallas Cowboys win at the Vikings, sort of traveled under the radar.

But social media being what it is, Cowboys receiver CeeDee Lamb complaint that he was tackled on the sideline by Vikings safety Harrison Smith and they subjected to a dirty play is now garnering the attention it just might deserve.

First, the live-action play as we all saw it …

But then, in a video originally distributed by the Cowboys, Smith - Minnesota's physical safety - while attempting to finish a tackle appears to choke Lamb.

Locked On Cowboys: Crossover with Locked On Broncos

"I'm just happy to have a group, and proud of a group, that can come in, be interchangeable and pick up where they need to when somebody goes down,'' says Prescott.

Coach Mike McCarthy termed the Lamb injury a "sprained ankle,'' and at this early stage it does not yet seem a serious concern.

After that, Lamb can be seen on the Dallas bench talking to teammates about the dirty play.

"He choked the f— out of me,'' Lamb complained.

Smith was not flagged on the play, and the TV broadcast made no mention of it. In defense of both, the refs and the TV producer cannot see everything.

But that does not mean it didn't happen.

One angle of the dirty play does make it look like a particularly uncomfortable situation for Lamb, and the smart money says the Cowboys have sent this play into the NFL office for review.

And what will come of it? Lamb, the Cowboys' stellar wide receiver who frequently gets fined by the league for what amounts to an untucked jersey, will get some level of satisfaction as the NFL simply must fine Smith for his choke hold.

Of course, as the 6-1 Cowboys prepare for Sunday's visit by the Broncos, the ultimate reward isn't about fines or retribution.

The Vikings "choked.'' The Cowboys won. 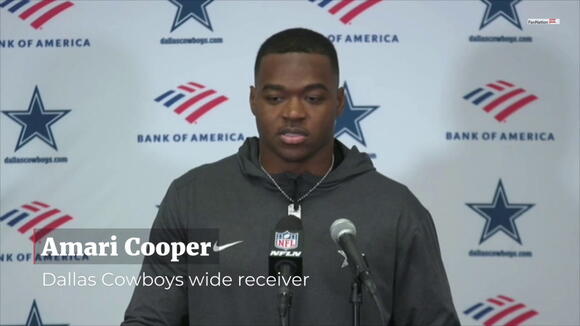 FRISCO - Here at Sports Illustrated, yours truly reported in December 2019 that the Dallas Cowboys used “back channels” to reach out to Sean Payton about the New Orleans Saints head coach's potential return to Dallas. That, of course, was as Jason Garrett was about to be pushed out the door.
NFL・1 DAY AGO
Yardbarker

With the 2021 NFL season coming to an end, Black Monday is on the rise. The Dallas Cowboys are headed to the postseason in Year 2 under Mike McCarthy, but other teams could be looking to head in a new direction. Who else is on the hot seat? Who will...
NFL・11 HOURS AGO
CowboyMaven

While it is still possible Aaron Rodgers returns to the Green Bay Packers for another season, oddsmakers have a surprising team listed as the favorite for the three-time MVP if he does decide to leave. SportsBetting.ag posted odds on Monday on Rodgers’ future after Green Bay’s loss to the San...
NFL・7 HOURS AGO

It's little consolation to the Dallas Cowboys that - after a wild weekend of NFL Playoff upsets - Dak Prescott wound up winning the same number of Divisional Playoff games as Aaron Rodgers, Tom Brady and Josh Allen. Because what happened at the end of last weekend's Wild Card loss...
NFL・1 DAY AGO
Sportsnaut

Dallas Cowboys might end up replacing Mike McCarthy after all

Cooper is under contract with the Cowboys until the end of the 2024 season.
NFL・2 DAYS AGO
Falcon Report

FRISCO - Can the Dallas Cowboys cut running back Ezekiel Elliott?. Amid the mountains of misinformation surrounding the two-time NFL rushing champ’s situation, let’s cut through the speculation for the top 10 takes on Zeke …. 1 Why Doesn’t Dallas Just Cut Him? That is not a practical...
NFL・12 HOURS AGO
All Hogs

Jerry Keeping Cowboys at Top of News ... Even in Defeat

Jerry Jones' way of continuing to keep the drama going even out of playoffs.
NFL・2 DAYS AGO
CowboyMaven

FRISCO - Everyone who pays attention to the Dallas Cowboys is searching for answers as to how “America’s Team” can become a championship team. The former Cowboys wideout Dez Bryant believes he’s got that answer in that form of one coaching change would get them to the Super Bowl …
NFL・12 HOURS AGO
Fort Worth Star-Telegram

The Atlanta Falcons have wide receiver questions for 2022. So do the Dallas Cowboys. Can each club provide the other with some answers?. Ridley is the Atlanta wideout who doesn’t seem to want to be in Atlanta. To be determined first: Where is Ridley on his mental health journey? To be determined after that - and this is the subject of much debate - What is his value?
NFL・14 HOURS AGO

There's no joy in Dallas these days, and mighty Jerry Jones is still swinging. The latest target: Amari Cooper﻿. During a Friday interview with 105.3 The Fan in which the Cowboys owner offered praise to quarterback Dak Prescott and coordinators Kellen Moore and Dan Quinn, Jones did not hide his disappointment in the four-time Pro Bowl wide receiver.
NFL・2 DAYS AGO
thecomeback.com

The Denver Broncos need a new head coach and it sounds like they’re getting very close to making their pick. According to some, they’ve already selected the person to lead them into the next NFL season. After firing Vic Fangio following the end of the regular season, the...
NFL・10 HOURS AGO
The Spun

The Kansas City Chiefs beat the Buffalo Bills, 42-36, in overtime at Arrowhead Stadium on Sunday evening. The game was a wild one, with several lead changes in the game’s final two minutes. Ultimately, the Chiefs were able to force overtime, before scoring the game-winning touchdown on a pass from Patrick Mahomes to Travis Kelce.
NFL・1 DAY AGO
The Spun

The Tampa Bay Buccaneers have cut a veteran running back to open up a roster spot ahead of Sunday’s Divisional Round game. The Bucs advanced to the Divisional Round this weekend by beating the Eagles last Sunday afternoon. Now, they have a date with the Los Angeles Rams, who may have had the most dominant playoff performance of the Wild Card round.
NFL・2 DAYS AGO
Sports Illustrated

Former Buccaneers wide receiver Antonio Brown just couldn’t help himself after his former team lost an absolute heartbreaker on Sunday. While Tampa Bay fans still were freshly mourning their season being over after a 30–27 loss to the Rams in the divisional round, Brown posted a meme on Twitter. And he reminded everyone of his own dramatic exit from the season.
NFL・1 DAY AGO
The Spun

On Friday night, five-star quarterback recruit Arch Manning had the best college football coach in the country – and his top assistants – at his high school basketball game. Manning, the No. 1 quarterback recruit in the 2023 class, is also a star on the hardwood. Alabama coach...
COLLEGE SPORTS・2 DAYS AGO
Audacy

Sean Payton has reportedly not yet committed to returning to the Saints next season while Troy Aikman could be leaving FOX for Amazon, leaving an opening that could put the Saints coach in the booth.
NFL・1 DAY AGO