Trevor Bauer Will Reportedly Not Opt Out of Contract with Dodgers 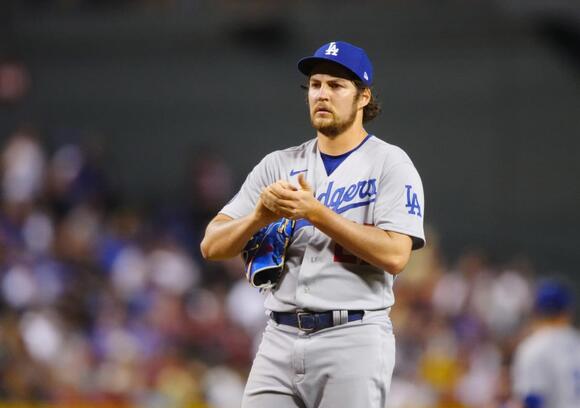 No surprises here, Trevor Bauer will not become a free agent this offseason.

With the World Series and the 2021 season officially behind us, the Dodgers will have to shift their focus to what comes next. The team has plenty on its plate as the offseason begins, and it appears that they now have one more item to add to that list.

According to MLB Insider Jon Heyman, Trevor Bauer is choosing not to opt-out of the remaining two years on his contract with Los Angeles.

This comes as no surprise, as Bauer stood to lose $64 million if he decided to become a free agent. With a new CBA in the near future and the potential for a lockout, if there are any delays, Bauer is doing what he can to protect himself from losing out on a major payday.

This development comes amid continued uncertainty surrounding the former All-Star. Bauer is still in the midst of a criminal investigation for an alleged sexual assault , which figures to find a resolution before the 2022 season begins. Once the court finalizes its decision, Major League Baseball will have its own opportunity to question Bauer before determining if he will miss additional time or not.

Whether or not the court finds Trevor Bauer guilty, the likelihood that he ever throws another pitch for the Dodgers remains slim. The team did everything possible to distance themselves during the regular season, and it would take an extraordinary change of circumstances to see them welcoming him back with open arms.

There will likely be much more coming out about Trevor's situation in the coming months, so stay tuned for the latest news and updates.

NEXT: Could Corey Seager's Market Be Colder than Expected?

The inability of players to train with their coaches at the team facilities is one aspect of the MLB labor dispute that seems to get overshadowed. But not being able to use the facilities hasn't prevented Dodgers superstar Mookie Betts from getting his workout and he was recently spotted honing his ...
MLB・2 DAYS AGO
Inside The Dodgers

After being traded to the Los Angeles Dodgers last season and finishing a massive 10-year deal inked with the Angels, Albert Pujols is now a free agent once again and looking for a team to join for the upcoming 2022 season. In a December interview with La Vida Baseball, the veteran slugger opened ...
MLB・2 DAYS AGO
Inside The Dodgers

When it comes to the 2022 campaign, one of the most asked questions for Dodgers fans is what will become of starting pitcher Trevor Bauer. He's in his second year of a three-year, $102 million contract, but he was put on paid administrative leave last season after accusations of sexual assault ...
PASADENA, CA・19 DAYS AGO
FanSided

Trevor Bauer, the man who’s arguably more known for his social media activity than his pitching, may have just signaled his fate for the 2022 season with the Los Angeles Dodgers. Last year, shortly after sexual assault accusations got the right-hander placed on MLB’s administrative leave, the Dodgers did...
MLB・2 DAYS AGO

ESPN Buster Olney thinks Treinen is one of the bullpen arms in baseball.
MLB・1 DAY AGO
True Blue LA

According to multiple reports, the Dodgers are signing Samuel Muñoz, a 17-year-old infielder from the Dominican Republic. MLB.com’s Jesse Sanchez writes that Muñoz has an advanced approach at the plate and is projected to have tons of power. He’s a left-handed hitter who is currently 6-foot-2 and weighs 180 pounds.
MLB・1 DAY AGO
Inside The Dodgers

Joe Kelly is quite the character around Major League Baseball. With two championships under his belt across a 10-year career, Kelly has made his name known in a big way. He took one World Series against the Dodgers in 2018 and another with Los Angeles in 2020, finally bringing a title back to the ...
MLB・1 DAY AGO
Inside The Dodgers

Tyler White agreed to terms for a minor league contract with the Milwaukee Brewers.
MLB・1 DAY AGO

The Dodgers have a limited signing bonus pool of approximately $4.6 million to spend on international free agents this year. But they have already signed one of the top prospects from the Dominican Republic. The team has not announced any signings of the first day of the international signing period...
MLB・1 DAY AGO
Los Angeles Times

Even with a theoretical regression ahead of him, there simply aren’t many pitchers like the Dodgers‘ Clayton Kershaw. Not just active. There aren’t really many Kershaws … in the history of baseball, and it might be a very long time before any more Kershaws emerge. Pitchers...
MLB・1 DAY AGO
dodgerblue.com

On Jan. 15, 2009, the Los Angeles Dodgers placed Andruw Jones on waivers after he agreed to defer the majority of the $21.1 million still owed to him, marking the end of a disastrous 13-month stint with the organization. Jones joined the Dodgers on a two-year, $36.2 million contract during...
MLB・1 DAY AGO

Dodgers: A Freddie Freeman contract to beat out the Braves

When it comes to the Freddie Freeman sweepstakes, you can not rule out the Los Angeles Dodgers signing him away from the Atlanta Braves. The Atlanta Braves are still enjoying their first World Series title since 1995, but fans are a bit nervous when it comes to the contract negotiations with Freddie Freeman. Of course, no move is going to be made for the foreseeable future with the lockout still in effect. But, there was one report that should worry Braves fans.
MLB・40 MINUTES AGO
dodgerblue.com

The Los Angeles Dodgers re-signed Yefry Ramirez to a Minor League contract, according to Chris Hilburn-Trenkle of Baseball America, and he will likely report to Triple-A Oklahoma City to provide pitching depth for the organization. Although the MLB lockout prevents teams from signing Major League players, Ramirez entered the offseason...
MLB・1 DAY AGO
FastBreak on FanNation

The Chicago Bulls Have Reportedly Signed A New Player

According to ESPN's Adrian Wojnarowski, the Chicago Bulls are signing Malcolm Hill to a 10-day contract.
NBA・2 DAYS AGO
NJ.com

Melky Cabrera, the starting center fielder for the Yankees’ 2009 World Series winning team, has retired. “I think the time has come for me to retire from MLB,” Cabrera said on social media in Spanish. Cabrera hadn’t played since 2019. Just three players from the Yankees’ last world...
MLB・2 DAYS AGO
Audacy

White Sox designated hitter Yermin Mercedes made a splash with a majestic home run—punctuated by an epic bat flip—in Thursday night’s Winter League game in the Dominican Republic.
MLB・2 DAYS AGO
Inside The Dodgers

The MLB lockout freezes big-league transactions. In a way, the Philadelphia Phillies have been frozen for a decade. Missing the
MLB・2 DAYS AGO
Sports Illustrated