Dodgers: MLB Insider Says Corey Seager Will Not Be Offered His Asking Price In Free Agency 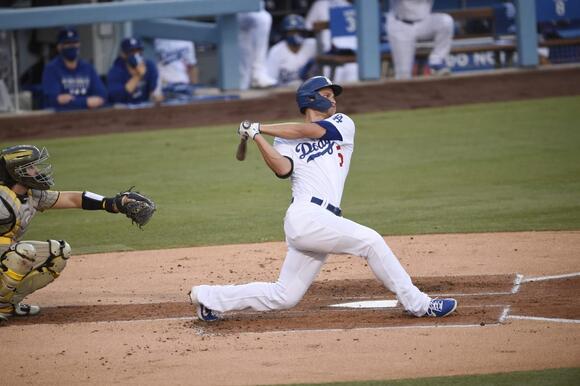 Could a large shortstop free agent class have Seager returning to LA?

This offseason is going to be one full of turnover and change for the Los Angeles Dodgers. Many of the Dodgers biggest names are set to be free agents, and that includes some legacy names. Change is a part of the game, but the Dodgers sure seem to have a lot of players this year venturing into free agency.

Corey Seager is one of those high-profile players. Seager has been in the big leagues for 7 years and has a world series ring under his belt, as well as an NLCS MVP, and a World Series MVP. The prognostications are all pointing to Seager wearing a different uniform next season. Seager's 162 game average statistics are impressive. Averaged over 162 games, his season numbers are as follows. 26 home runs, 870 OPS, and a 145 OPS+. This includes a season and a half where he was not playing at 100% health.

Rumors have Seager asking's price to be in the $300 million range, and that is not something the Dodgers are going to pay this offseason, especially after they signed Mookie Betts to a $365 million contract last season. An MLB analyst also notes that with a large class of elite shortstops all going into free agency this season, Seager's price may get driven down. The comments came in a recent segment with ESPN’s Ramona Shelburne.

“Here’s the thing… I don’t think [Corey] Seager is going to get as much money as he thinks he is”, Steve Mason said on 710 ESPN. “Carlos Correa is a free agent, Trevor Story is a free agent, Javy Báez is a free agent. All of a sudden, there is a glut of shortstops on the market. I think [Seager] will come cheaper than we think he’ll come.”

If Seager's price drops or even the number of years, this could open the door for the Dodgers to possibly re-sign Seager. With so many teams predicting "Seager to the Yankees," if they were to sign the likes of a Carlos Correa or Javier Baez, Seager's options start to run short. It could set up a situation where Seager returns to his organizational home.

When it comes to the 2022 campaign, one of the most asked questions for Dodgers fans is what will become of starting pitcher Trevor Bauer. He's in his second year of a three-year, $102 million contract, but he was put on paid administrative leave last season after accusations of sexual assault ...
PASADENA, CA・28 DAYS AGO
FanSided

After the 2020 season, Justin Turner was a free agent, fresh off helping the Los Angeles Dodgers win their first World Series in 32 years. And at times it felt like there was a real possibility he’d be leaving. Though the negotiations took a little longer than fans would’ve...
MLB・16 HOURS AGO
Inside The Dodgers

In the mid-2000s, Andre Ethier helped launch a new era of success for the Dodgers organization. The outfielder made his debut in Los Angeles in 2006, when James Loney, Russell Martin, and Matt Kemp were also called up. He quickly established himself as one of the best up-and-coming players in the league.
MLB・1 DAY AGO

Three weeks from when pitchers and catchers usually report and no one knows when spring training will start or if it will be a truncated schedule.
MLB・2 DAYS AGO
Sports Illustrated

Aug 20, 2020; Seattle, Washington, USA; Los Angeles Dodgers designated hitter Matt Beaty (45) hits an RBI-double against the Seattle Mariners during the third inning at T-Mobile Park. Mandatory Credit: Joe Nicholson-USA TODAY Sports. Due to the MLB lockout, players are having to think outside the box in order to...
MLB・2 DAYS AGO
FanSided

We stopped beating this particular drum for the Los Angeles Dodgers last year because, well, the price seemed astronomical. From everything we heard, the sometimes-foolhardy Colorado Rockies would be shooting for the moon in trade talks for this inspiring target, and if that was the case, wouldn’t they double or triple an already-wild asking price if it was the Dodgers who came calling?
MLB・2 DAYS AGO
baseballessential.com

Jeff starts the episode and talks about the latest “progress” from the MLB lockout. Then he gives his thoughts and prediction for the Hall of Fame voting. Vince finishes the episode talking about Mookie Betts’ offseason and his ascension into bonafide Los Angeleno. Locked On Dodgers, the...
MLB・10 HOURS AGO

Alex Rodriguez, a three-time MVP whose 696 home runs trail only Barry Bonds, Hank Aaron and Babe Ruth, received just 34.3% of the votes in his debut.
MLB・10 HOURS AGO
The Spun

On Tuesday night, the Hall of Fame voting for the 2022 class will be revealed. In honor of this special day, Cal Ripken Jr. named a player the MLB has “shortchanged” in balloting. Ripken made it known that he believes Don Mattingly should be in the Hall of...
MLB・17 HOURS AGO
Audacy

Yankees legend Alex Rodriguez randomly showed up on the TV in the fourth quarter of Saturday’s divisional playoff game between the Packers and 49ers.
NFL・2 DAYS AGO
USA TODAY

Roger Clemens, the seven-time Cy Young winner, is in his final year of eligibility on the Hall of Fame ballot.
MLB・1 DAY AGO

BOSTON (CBS) — It wouldn’t be Hall of Fame season if a member of the baseball media wasn’t twisting himself into a pretzel for all the world to see. Enter Jack Curry of the Yankees’ broadcast network. Curry revealed his ballot on Tuesday, which is the day that the Baseball Hall of Fame will announce which players — if any — will earn enshrinement this year. Curry used eight of his allowable 10 votes this year, and for the first time in their 10 years of eligibility, Barry Bonds and Roger Clemens received his vote. The reason Curry hadn’t voted for Bonds and...
MLB・15 HOURS AGO
USA TODAY

David Ortiz needed just one swing to power his way into baseball’s Hall of Fame, narrowly punching his ticket to Cooperstown.
MLB・11 HOURS AGO
Audacy

MLB Network’s Rob Parker did not vote for David Ortiz citing a gray area with PEDs, but he voted for Barry Bonds, Roger Clemens and Sammy Sosa, leading to one of his colleagues to call him out.
MLB・7 HOURS AGO
USA TODAY

Major League Baseball and the players union continued to make slow, incremental progress Tuesday, but they are still a long way from an agreement.
MLB・13 HOURS AGO
Inside The Blue Jays

Carter's fiery demeanor got him noticed by Blue Jays scouts. Now it's his humility off the field that's impacting the city of Toronto.
MLB・1 DAY AGO
Sportico

Barry Bonds, Roger Clemens, Todd Helton, David Ortiz, Andy Pettitte, Manny Ramirez, Alex Rodriguez, Scott Rolen, Curt Schilling, Sammy Sosa — My ballot for the National Baseball Hall of Fame Class of 2022. The Hall of Fame is now right where it wanted to be in 2014, when it changed the eligibility for players on the writer’s ballot from 15 years to 10. Barry Bonds, Roger Clemens and Sammy Sosa, stars of Major League Baseball’s so-called steroid era, are now off the Baseball Writers of America Association ballot five years before they otherwise would have been. For the 10th consecutive year, the...
MLB・8 HOURS AGO
Audacy

The two sides met on Tuesday, marking the second consecutive day of discussions between the parties.
MLB・14 HOURS AGO