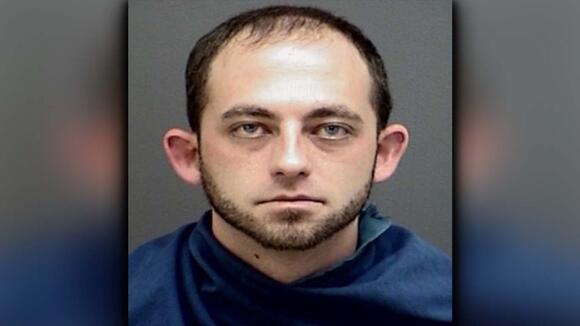 WICHITA COUNTY (KFDX/KJTL) — Posting about his visit to an Oklahoma casino could put an I.D. thief’s probation in jeopardy.

Jeramy Brown was booked into jail Tuesday and ordered held without bond on an arrest warrant filed after the district attorney’s office moved for revocation of his 10 years probation.

Brown was placed on 10 years probation in 2015 for possession of more than 50 items of identifying information.

The district attorney’s office alleges multiple violations of probation restrictions including use of multiple drugs and traveling to Oklahoma without permission, and being at a place where alcohol is sold, specifically River Star Casino in Terrell.

When a probation officer asked about his Facebook post about being at the casino, they said he replied, “oh, I guess I should take that down off Facebook,” and admitted being there.

The codefendant in this case, Kyle King, also had his probation revoked in 2020 based on allegations he stole a camera, tested positive for alcohol, and punctured a woman’s tire. King was placed back on probation with more restrictions.

King is the owner of a former Wichita Falls computer programming business and was arrested for stealing personal information of more than 100 customers. Police said his business was failing and that he used bank and credit card accounts of victims and secured fraudulent loans in victims’ names.

Police said Brown was an accomplice and agreed to help in the scheme to help pay for King’s meth habit.

The Wichita Falls Police Department is investigating the death of an eighth grader from Barwise Middle School, according to Sgt. Charlie Eipper.
WICHITA FALLS, TX・2 HOURS AGO
Texoma's Homepage

Man who represented himself in officer assault trial found guilty

WICHITA FALLS (KFDX/KJTL) — A Wichita County jury finds a Wichita Falls man who represented himself guilty of assaulting a WFPD officer and he is sentenced to prison. Other criminal cases against the defendant are pending. Lorin Turner, 41, was given a 5-year sentence by the 78th District jury on Tuesday. Records show he waived […]
WICHITA FALLS, TX・9 HOURS AGO
Texoma's Homepage

MIDLAND, Texas (Nexstar) — The Midland Police Department says an Apple Air Tag was used to stalk a Midland woman. Now Ray David Valverde Jr. is behind bars, charged with stalking, a third degree felony.  According to an arrest affidavit, on January 24, a woman called MPD and informed an officer she was trying to […]
MIDLAND, TX・8 HOURS AGO
Texoma's Homepage

The man who allegedly sold Malik Faisal Akram the gun used in a hostage situation at a Colleyville, Texas synagogue has been federally charged, the United States Attorney for the Northern District of Texas announced in a release.
COLLEYVILLE, TX・9 HOURS AGO

WICHITA FALLS (KFDX/KJTL) — The Wichita County District Attorney has filed a revocation of probation and is asking for a 2 to 10-year prison sentence for a man convicted of robbing the same convenience store twice in two months in 2018. Ebu Prince Oji is being held without bond for his alleged violations. He pleaded […]
WICHITA COUNTY, TX・6 HOURS AGO
Texoma's Homepage

WICHITA FALLS (KFDX/KJTL) — The year 2021 has become the deadliest year in Wichita Falls since the 1990s after information emerged Tuesday, Jan. 26, 2022, of a suicide that was later determined a homicide. The murder of 65-year-old Vickie Hanson put Wichita Falls at 14 homicides for the year 2021. This number comes as a […]
WICHITA FALLS, TX・8 HOURS AGO
Texoma's Homepage

WICHITA FALLS (KFDX/KJTL) — A Wichita Falls man is in jail on a $1 million bond following an investigation into the death of his wife last year. Around 4:30 p.m. on October 14, Wichita Falls police were called to a home in the 6700 block of Geronimo Drive to investigate a possible suicide by gunshot. […]
WICHITA FALLS, TX・1 DAY AGO
Texoma's Homepage

WICHITA FALLS (KFDX/KJTL) — A doorbell camera video posted to social media has led to the arrest of a suspected Christmas package thief from November. Kagan Baisden, 24, who has previous convictions for theft, has been released from jail on a $2,500 bond for theft of mail. The theft was reported by a resident in […]
WICHITA FALLS, TX・1 DAY AGO
Texoma's Homepage

WICHITA FALLS (KFDX/KJTL) — One of three suspects authorities suspect were traveling all around Texas stealing iPhones and electronics from Walmarts is charged after being linked to thefts from three Wichita Falls Walmarts in 2019. Radu Benone of California has been indicted on two counts of Engaging in Organized Criminal Activity-Theft. The Walmart on Greenbriar […]
WICHITA FALLS, TX・2 DAYS AGO
Texoma's Homepage

WICHITA COUNTY (KFDX/KJTL) — A Wichita County district judge has ordered bond to be lowered for a man facing 14 counts of attempted capital murder of law officers and first responders. Anthony Kienlen, 35, was being held on $500,000 bonds on each of those counts plus $35,000 bonds for two other charges, deadly conduct and […]
WICHITA COUNTY, TX・1 DAY AGO

WICHITA FALLS (KFDX/KJTL) — The Fort Worth attorney for a man facing 14 counts of attempted capital murder of law officers and first responders has filed a motion for reduction of his $7 million-plus in bonds. A hearing on the motion is set for Tuesday morning in 78th District Court. Anthony Kienlen, 35, is being […]
FORT WORTH, TX・2 DAYS AGO
Texoma's Homepage

WICHITA FALLS (KFDX/KJTL) — Surveillance cameras at a home and a store lead police to a suspect in a rollover accident of a stolen car just about a year to the date later. Brykell Patton is charged with theft of over $2,500. He was arrested Sunday, three days short of a year since the arrest […]
WICHITA FALLS, TX・2 DAYS AGO
Texoma's Homepage

AUSTIN, Texas – The Texas Health and Human Services Commission is offering up to $5,000 in hiring bonuses for certain health care positions at state-supported living centers and state hospitals across Texas. These hiring bonuses are for registered nurses (RN) and licensed vocational nurses (LVN) at SSLCs and state hospitals, as well as psychiatric nursing assistants (PNA) at […]
TEXAS STATE・11 HOURS AGO
Texoma's Homepage

Police say the man's arm may have been cut off near the shoulder by a band saw.
LEWISTON, ME・3 DAYS AGO
Texoma's Homepage

CROCKETT, Texas (KETK) — A woman was arrested in Crockett for allegedly attempting to purchase another woman’s child at Walmart while they were in the self-checkout line. The incident happened last week, according to The Messenger. Police records show Rebecca Lanette Taylor, 49, of Crockett was detained on Jan. 18 and charged with the sale […]
CROCKETT, TX・2 DAYS AGO
Texoma's Homepage

Pups get treats, loved on at Humane Society of Wichita County

WICHITA COUNTY (KFDX/KJTL) — Folks at the Humane Society of Wichita County always welcome the community to love on their pups and kitties that have yet to find a forever home. Wednesday, January 26, those fur babies got some special attention. After seeing one of their most recent posts, Wichita Falls resident and business owner […]
WICHITA COUNTY, TX・5 HOURS AGO
Texoma's Homepage

An Alabama woman says she had thousands of dollars stolen after a scammer in the guise of a bank employee used the Zelle app to siphon money from her account. (Credit: WHNT)
HUNTSVILLE, AL・2 DAYS AGO