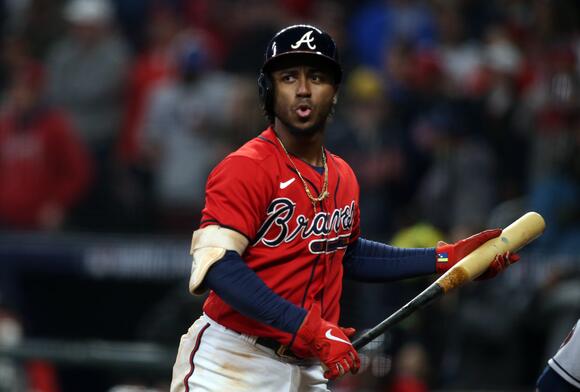 The Atlanta Braves are on the cusp of doing something they haven't done since 1995. If the Braves were to win a World Series, it would be something special for the city of Atlanta.

In preparation for game six, there has been a lot of conversations about whether or not Ozzie Albies will be able to get back on track in this series. Albies has struggled on the biggest stage. He is batting .167 and has an on-base percentage of .286.

Kris Willis, of Talking Chop, joined the Jon Chuckery show to talk about Albies' move to the bottom of the lineup.  "I'm hoping dropping him down to seventh, he'll get some opportunities down there," Willis said.

Albies has looked pressed when coming to the plate in the three-hole. With Brian Snitker making this move, it does show that he is willing to make the moves that need to be made for his team. Let's just hope, for the Braves' sake, that moving Albies down is the right one.

ESPN's Alden Gonzalez doesn't think that the Dodgers would be willing to sign Freeman to a long-term deal.
MLB・2 DAYS AGO
Inside The Phillies

One of the first black superstars in Philadelphia Phillies history, today we remember the legendary career of Dick Allen.
MLB・2 DAYS AGO
Falcon Report

Davis is an impending free agent this offseason.
NFL・17 HOURS AGO
Inside The Dodgers

Arizona vs Colorado
MLB・1 DAY AGO

Person
Ozzie Albies
Inside The Dodgers

The Cincinnati Reds are a part of MLB history, widely recognized as one of the most storied franchises in baseball.
NFL・2 DAYS AGO
Sports Illustrated

We asked our writers to advocate for one player on this year’s ballot to get elected to Cooperstown.
MLB・2 DAYS AGO
Inside The Phillies

Inside the Phillies fielded mailbag questions while the MLB lockout is in full force.
MLB・2 DAYS AGO

The Dodgers catcher explained how he approaches the highs and lows of a MLB season.
MLB・1 DAY AGO
Inside The Dodgers

Justin Turner began the 2021 season batting .305 with 29 homers, 50 RBI, and a 1.088 OPS over 84 games. Then he was selected to play in the All-Star Game for the second time, and it appeared as if the Dodgers made a brilliant move in signing him to a 2-year deal with a team option in the previous ...
MLB・1 DAY AGO
Inside The Royals

The Kansas City Royals drafted pitcher Ben Hernandez fresh out of high school in 2020, but he could display quite a bit of maturity and growth just two years later.
MLB・1 DAY AGO

Three weeks from when pitchers and catchers usually report and no one knows when spring training will start or if it will be a truncated schedule.
MLB・21 HOURS AGO
USA TODAY

A polarizing figure throughout his career, A-Rod ranks fourth on the all-time home run list, but was suspended for violating MLB's drug policy.
MLB・1 DAY AGO
Inside The Phillies

Jean Segura doesn't put up flashy numbers or make dazzling defensive plays, but all together he is one of the most well-rounded players in the National League.
MLB・16 HOURS AGO
Inside The Phillies

A new change will be implemented in the upcoming minor league season.
MLB・1 DAY AGO
Inside The Dodgers

Thanks to the hot stove freeze, there’s time to sit back and explore some of the bigger question marks surrounding the Dodgers for 2022. With Walker Buehler and Julio Urias atop the rotation, Dave Roberts and the Dodgers will have some decisions to make on who will fill out the remaining spots ...
MLB・1 DAY AGO
Inside The Phillies

What If Ryan Howard Never Tore His Achilles?

The Phillies lose game 5 of the 2011 NLDS to the Cardinals, as many Phillies fans would like to forget. But what would happen if Ryan Howard didn't tear his Achilles on that play, how would the future have looked different?
MLB・1 DAY AGO
The Baltimore Sun

In less than a month, Orioles pitchers and catchers are scheduled to report to Sarasota, Florida, to mark the start of spring training. Yet, there remains uncertainty as to whether that will happen as planned with the league’s owners continuing to lock out the players as the two sides plod toward a new collective bargaining agreement. But as the lockout marches on, so too does Oriole of the ...
MLB・1 HOUR AGO