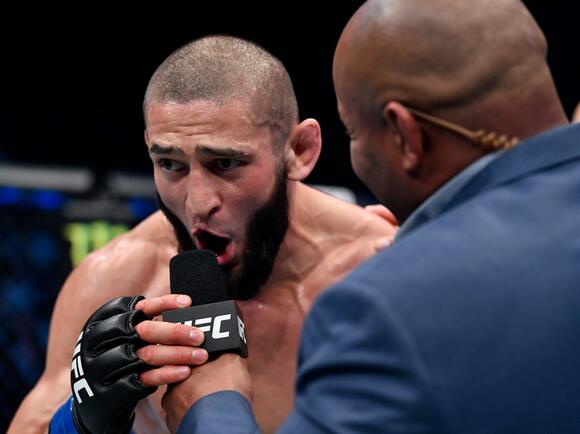 ABU DHABI - Khamzat Chimaev trash-talked Dana White while he lay a beatdown on Li Jingliang on Saturday's UFC 267 event at the Etihad Arena in Abu Dhabi.

"He was yelling crazy shit at me the whole fight," the UFC boss told reporters at a post-fight press conference Insider attended.

"I don't know why, but basically just saying: 'I'm going to fight everybody, I'll fight Brock Lesnar, I don't care who it is.' He was just yelling stuff like that."

Despite suffering from a condition of long COVID that was so severe he coughed up blood, thought he might die, and flew to the US from Europe for treatment, Chimaev fought like he had never been away.

He picked Jingliang up mere moments from the opening bell, carried him to the side of the Octagon that White was near, and apparently said he was going to kill everyone on the UFC roster .

"Listen, last time we were here, we knew this guy was special," White said. "This COVID thing is one of the weirdest things any of us have ever seen.

"You get some people that fit the profile to be high risk and it doesn't even feel like a bad cold to them, and then a guy who's in phenomenal shape like this guy, gets hit as hard as he did by COVID.

"But he's back and he's no doubt this kid's special."

White said Chimaev, who has now finished four UFC opponents in equally dominant fashion, will climb into the top-10 rankings at welterweight when the new results are tallied internally by Tuesday.

Chimaev has spoken eagerly about fights with Nate Diaz, Jorge Masvidal, and had previously been scheduled to compete against Leon Edwards - a bout laid to waste by the coronavirus.

"If he wants to stay busy, I'm a big believer in that anyway, especially with the huge layoff he's had. I don't know. We would figure it out if that's what he really wanted to do.

"I'm sure the guy does want to fight. We'll get home and figure out what's next for him."

Novak Djokovic won, quite literally, the biggest prize in tennis at the Tel Aviv Open

"In awe at the size of this trophy," tweeted the US Open after Djokovic won the Tel Aviv Open on Sunday. "Absolute unit."
TENNIS・2 DAYS AGO