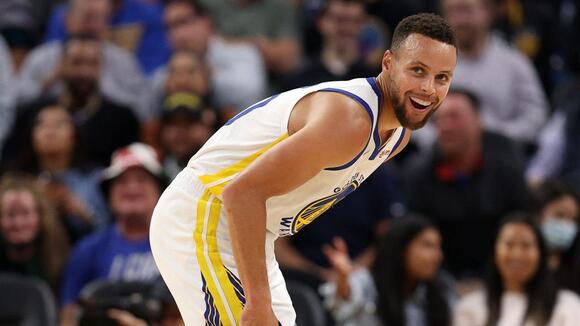 We've already seen Stephen Curry hit a variety of seemingly impossible shots that it seems like a difficult task to find displays of skill he has not yet shown us than vice versa. Full-court heaves, wild three-pointers through contact, insane 40-foot pull-ups, high-arcing finger rolls... it feels like we'd seen it all.

That is, until we realized he hit a shot that we'd never seen before, doing so on Thursday night against the Memphis Grizzlies and laughing with glee, surprise or a combination of the two after it fell. When even Curry is shocked at his abilities, that's when you know a special moment is in the making. Steve Kerr, on the other hand, looked like he simply gave up on trying to coach smart basketball and couldn't really do anything but sit there with a grin.

That's one way to make the most of a two-for-one moment, isn't it? But even for Curry, pulling up on one leg for a spontaneous three-pointer seems a little ridiculous... but when you look a little deeper, it makes more sense as to why he reacted the way he did.

Thanks to apparent Steph superfan and Reddit user " nowhathappenedwas ," I became aware of an interview Curry had in 2018 where he spoke about Spanish guard Juan Carlos Navarro, one of his favorite players. Here's what he had to say:

“[Navarro] was one of my favorite Spanish national players,” Curry said ( via Hoops Hype ). “He did a move in the 2010 World Championship where he shot a three off of one leg, and I wanted to copy that move.”

That clip above may not have been the exact shot in question, based on the dates, but in any case... look familiar? Cross another ridiculous achievement off the Steph Curry bucket list.

a family man, great role model, superb leader, let's just enjoy him while we can, CLASSY

The Golden State Warriors lost to the Indiana Pacers at home on Thursday night, and after the game Steph Curry spoke to the media.
NBA・22 HOURS AGO
95.7 The Game

During their last championship run in 2014, the San Antonio Spurs lived by the motto of “Good to great” — a concept that you give up a good shot in order to get a great shot for a teammate — and even had the words engraved in their championship rings. It is a philosophy of unselfishness and teamwork that could be seen on the court every night with a beautiful display of passing, cutting, more passing and eventually an open layup, dunk or jump shot.
NBA・1 DAY AGO
95.7 The Game

Warriors coach Steve Kerr took the blame for his team’s 121-117 overtime loss to the Indiana Pacers, who were without four of their top five scorers.
NBA・20 HOURS AGO

First-place Phoenix travels to take on a surging Dallas team and Indiana draws Golden State on the second night of a back-to-back.
NBA・1 DAY AGO
95.7 The Game

Watch Stephen Curry hit the first buzzer-beating game-winner of his NBA career as he helped the Golden State Warriors to a dramatic win over the Houston Rockets.
NBA・2 HOURS AGO
East Bay Times

With game-winning shot, Steph Curry does something he’d never done in his career

SAN FRANCISCO — Stephen Curry’s buzzer-beater jumper secured the Golden State Warriors’ 105-103 win over the Houston Rockets on Friday night. Curry and the Warriors celebrated the regular season win over a tanking team like it was a title-clincher. Justified, the team said, given the team’s recent funk in which they’d lost seven of their last 10 games.
NBA・8 HOURS AGO

After hitting his first buzzer beater game-winner, Steph Curry tried running into the tunnel. They didn’t let him.

Stephen Curry caught the inbound pass with 5.1 seconds on the clock in a tie game. Since Kevin Porter Jr. defended him tightly, he had to rip through from his right to his left hand. Curry drove toward the free throw line, planted his right foot and launched himself backwards....
NBA・7 HOURS AGO
ESPN

SAN FRANCISCO -- As the Golden State Warriors and Houston Rockets sat with a tied score with just over five seconds left Friday night, Steve Kerr had a clear play in mind for their final offensive possession: "Get the ball to Steph and get out of the way." They executed...
NBA・7 HOURS AGO
Lakers Nation

A potentially major development occurred in the Los Angeles Lakers’ 111-104 loss to the Indiana Pacers on Wednesday. With 3:52 left in the fourth quarter, head coach Frank Vogel deployed Malik Monk onto the court, taking Russell Westbrook out of the game in crunch time — an adjustment rarely seen in the first half of the 2021-22 season. About four minutes earlier, L.A. had lost its lead that they held onto for the majority of the game.
NBA・1 DAY AGO
HipHopWired

This week, King James made history by becoming the first player to reach the milestones of 30,000 points scored, 10,000 rebounds hauled in, and 9,000 assists doled out.
NBA・2 DAYS AGO

According to The Athletic’s Shams Charania, the Brooklyn Nets have agreed to find big man Paul Millsap a new team
NBA・19 HOURS AGO
Insider

The Nuggets have a scoring margin of a championship team when Nikola Jokic plays, and when he sits, they are worse than the NBA's worst team.
NBA・1 DAY AGO
Sportsnaut

With the Feb. 10 NBA trade deadline looming, a good trade could help teams win a title. Just ask the Milwaukee Bucks.
NBA・2 DAYS AGO
95.7 The Game

Luka Doncic has many of the same flaws as Russell Westbrook but gets far less criticism. He may not be able to outrun it much longer.
NBA・18 HOURS AGO