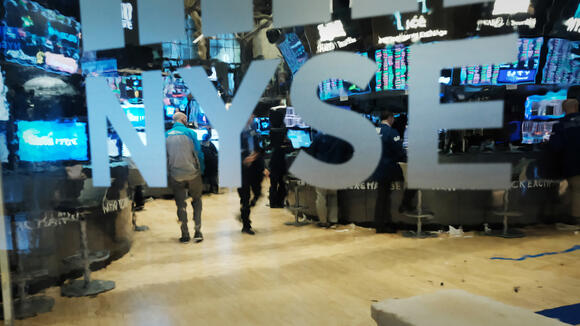 The tech giants' disappointing September quarter earnings, alongside softer-than-expected forecasts, look set to rip around $200 billion in value out of the market at the start of trading while raising deeper concerns for the fate of 'just-in-time' delivery for retailers and semiconductor suppliers for the broader tech sector into the final months of the year.

Investor sentiment is also starting to turn cautious amid the steady stream of corporate warnings on inflationary pressures and supply chain woes, with Bank of America noting the biggest move into cash by global fund managers this week since April 2020, and bond markets signaling their most bearish assessment on growth since the peak of the pandemic last year.

On the inflation front, the Federal Reserve's preferred metric -- the PCE Price Index -- will be published at 8:30 am Eastern time as market-based gauges are sitting at the highest levels since 2006.

On Wall Street, futures contracts tied to the Dow Jones Industrial Average are indicating a 35 point opening dip ahead following earnings from Chevron (CVX) - Get Chevron Corporation Report and Exxon (XOM) - Get Exxon Mobil Corporation Report, while those linked to the S&P 500 are priced for 22 point pullback following last night's record high close.

Futures tied to the tech-focused Nasdaq Composite are indicating a 130 point slide following the weaker-than-expected earnings from last night for Amazon and Apple.

Apple, in fact, is down 3.6% in pre-market after noting that upply chain woes ripped $6 billion from its September quarter sales amid the tech giant's first quarterly earnings miss in five years.

Apple's holiday quarter sales will also be hit by the chip shortage, although CFO Luca Maestri told investors on a conference call that December quarter sales would be "very solid", and likely hit a record high, with gross margins in the region of 41.5% to 42.5%.

Amazon shares, meanwhile, were marked 4.6% lower, erasing nearly all of their gains for the year, after the world's biggest online retailer forecast softer-than-expected holiday sales following a $2 billion hit from labor costs and supply chain disruptions to its third quarter earnings.

Amazon CFO Brian Olsavsky cautioned that costs linked to hiring, inflation and other "operational disruptions" could rise to as high as $4 billion over the December quarter, while forecast for revenues of between $130 billion and $140 billion.

On the upside, Chevron rose 2% after a surge in oil and gas prices from last year's pandemic lows lead to the group's strongest quarterly profits in eight years and prompted speculation of a dividend hike.

Oil prices edged modestly higher, but are still on track for their first weekly loss in two months, following a bigger-than-expected 4.3 million barrel increase in domestic crude stocks reported earlier this week and Iran's plan to return to talks aimed at limiting its nuclear program.

WTI futures contracts for December delivery were marked 20 cents lower on the session at $83.01 per barrel while Brent contracts for the same month fell 23 cents to $84.55 per barrel.

Is the market crashing? No. Here’s what’s happening to stocks, bonds as the Fed aims to end the days of easy money, analysts say

Americans are wondering what's amiss with Wall Street after steep declines in stocks and a surge in bond yields in recent weeks. Here's how to think about it.
STOCKS・23 HOURS AGO
MarketWatch

Stocks fell sharply on Monday as investors anticipated inflation-fighting measures from the Federal Reserve and fretted over the possibility of conflict between Russia and Ukraine.
STOCKS・22 HOURS AGO
WTNH

The Dow Jones Industrial Average dropped more than 1,000 points Monday as financial markets buckled in anticipation of inflation-fighting measures from the Federal Reserve and fretted over the possibility of conflict between Russia and Ukraine.
STOCKS・22 HOURS AGO

Rising costs are raising concerns that consumers will start to ease spending because of the persistent pressure on their wallets.
STOCKS・23 HOURS AGO
MarketWatch

U.S. stock benchmarks rally in the final minutes of trading, reversing a sharp selloff, as investors look to the Fed's policy update on Wednesday.
NEW YORK CITY, NY・19 HOURS AGO

Tech and fintech stocks have been getting hammered amid the Federal Reserve's changing policy outlook.
STOCKS・22 HOURS AGO
The Motley Fool

An analyst price-target shave didn't do the company any favors.
STOCKS・19 HOURS AGO
The Motley Fool

On a bumpy day for markets, shares of these financial stocks all saw some significant lows before battling back to cut their losses.
STOCKS・19 HOURS AGO
CNBC

Bitcoin has had a difficult start to 2022. The top cryptocurrency fell below the $33,000 mark on Monday to its lowest point since July, before regaining some losses later in the day. Still, the digital asset is down about 20% year to date, and roughly 40% below its all-time high...
STOCKS・22 HOURS AGO
The Motley Fool

Value should be the name of the game in 2022.
STOCKS・1 DAY AGO
TheStreet

The Dow Jones Industrial Average fell 4.58% last week, and was down 5.70% on a year-to-date basis ahead of Monday’s whipsaw session. “It’s not often we see down sessions every day during a calendar week. But then, the technical condition has been weak for a while as we have noted,” TheStreet’s Action Alerts Plus team wrote. According to the AAP, the current sentiment and indicators are reaching extreme levels though, and that means a big powerful rally is likely to ensue within days.
STOCKS・19 HOURS AGO
TheStreet

Tech Stocks Roundup: The Battle for the Metaverse — Let the Games Begin

Apple (AAPL) - Get Apple Inc. Report reportedly is preparing to take on its biggest tech rivals in a bid to conquer the metaverse, the virtual world that appears to be a new reality. And, the fight is on. May the odds be ever in the tech giants' favor. A...
MARKETS・20 HOURS AGO
MarketWatch

The tech giant faces a litmus test going into the release of its quarterly report on Thursday.
STOCKS・1 DAY AGO
TheStreet

Nvidia (NVDA) - Get NVIDIA Corporation Report shares slumped lower Tuesday amid reports that the chipmaker is ready to abandon its $40 billion takeover of U.K.-based Arm Holdings. Bloomberg News reported Tuesday that Japan-based Softbank, which purchased Arm for around $32 billion in 2016, is looking to list the chip...
ECONOMY・5 HOURS AGO
TheStreet

Fitness equipment maker Peloton (PTON) - Get Peloton Interactive, Inc. Class A Report may want a do-over for its past few months. The company has seen its market cap plunge to under $10 billion as sales have stalled and market demand for its pricey connected-fitness bikes and treadmills seems to have evaporated.
MARKETS・22 HOURS AGO
Entrepreneur

4 Buy the Dip Semiconductor Stocks That Offer Growth and Value

The global semiconductor industry achieved unprecedented growth last year thanks to hefty private capital investments and government funding. Because this trend is expected to continue in 2022, we think it...
STOCKS・1 HOUR AGO