10 Things in Politics: Dems slash Biden's agenda in search for a deal 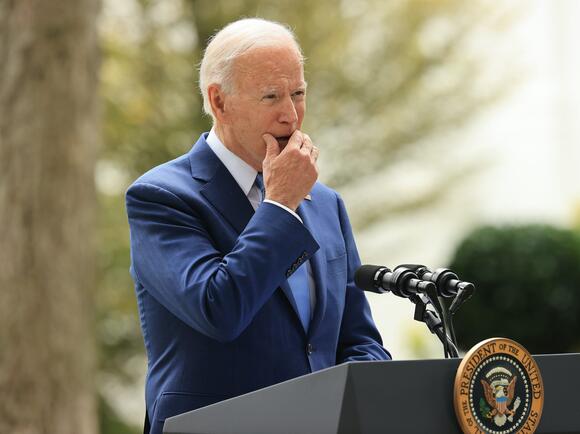 Welcome back to 10 Things in Politics . Sign up here to receive this newsletter . Plus, download Insider's app for news on the go - click here for iOS and here for Android . Send tips to bgriffiths@insider.com .

Here's what we're talking about:

1. MORE DEM DRAMA: President Joe Biden's agenda is on the chopping block. In an effort to wrap up Democrats' massive spending plan, lawmakers are leaving some of the president's core campaign promises on the cutting-room floor. The latest victim appears to be Biden's paid-leave plan , which multiple reports indicate is likely to be jettisoned from the bill because Sen. Joe Manchin opposes its inclusion. That would leave the US remaining the only wealthy nation in the world without a federal paid-leave program.

Biden is expected to make the case himself later this morning: He's delaying the start of a major foreign trip to address House Democrats directly both on the massive spending plan and on a separate bipartisan infrastructure bill that has been held up by infighting over the social plan, Politico reports.

Progressives are fuming: Sen. Bernie Sanders told reporters "the very fabric of American democracy is in danger" if progressive policies were left out of the spending bill. Among the provisions Sanders emphasized were those that would lower prescription-drug prices; expand Medicare to cover vision, hearing and dental; address the climate crisis; and raise taxes on the rich.

Here's what's on the chopping block: Sen. Kyrsten Sinema of Arizona and some other lawmakers are said to be opposed to a plan to give Medicare more power to negotiate lower drug prices. Manchin's opposition to many of the bill's original climate-related proposals has also sparked major changes .

2. How Jeffrey Clark got "canceled" after Trump's slow-coup attempt: The Trump taint is sticking to Jeffrey Bossert Clark. It's the byproduct of his service in the waning days of the tumultuous Republican administration when he tried to take over the Justice Department as part of President Donald Trump's last-ditch effort to overturn the 2020 election results. Read more about what Clark is doing 10 months later, including how he has been shunned by his old law firm and had his name scrubbed from a new one .

3. CDC adds mood disorders to list of eligible conditions for a booster shot: Healthcare experts told The Post that the addition of depression and schizophrenia-spectrum disorders to a long list of mostly physical conditions wasn't surprising given long-settled research. Currently, eligibility for a booster in the US is limited to older Americans, those who work in high-risk settings, or those with underlying health conditions. The change means millions more people could be able to receive a booster shot .

Confused about boosters?: This chart can tell you whether you actually need one .

4. Top US general says China's hypersonic weapon test is close to a "Sputnik moment": Gen. Mark Milley, the chairman of the Joint Chiefs of Staff, called the reported recent test a "very significant event," though Beijing has denied any such test happened. Milley's comments follow those of other senior US military officials sounding the alarm about China's growing military might and emerging strike capabilities. More on how the US military is keeping close tabs on China .

5. Biden heading on a major international trip with few ambassadors in place: Biden lags considerably behind Trump in how many of his ambassador selections have been confirmed by the Senate up to this point, The Post reports. So far, the Senate has confirmed just four nominees to be a US ambassador to a foreign government. Republican senators, led by Ted Cruz of Texas, have held up what is usually a routine process over other policy disagreements. More on the blockade and what Democrats say it's doing to America's standing abroad .

6. Iran is returning to nuclear talks: Ali Bagheri, the Iranian deputy foreign minister, said Tehran was involved in a "very serious and constructive dialogue" with the European Union. Iran suspended the indirect talks with the US, which began in April in Vienna, following Ebrahim Raisi's victory in the country's presidential election in June. More on the news .

7. State Department issues first "X gender" passport: A State Department spokesman said the move was a step toward inclusion for nonbinary, intersex, and gender-nonconforming people. Secretary of State Antony Blinken first announced the new policy in June; it also means people can self-select "M" or "F" on passports without the need for medical certification. More on the milestone .

8. There's a new federal inquiry into Facebook: The Federal Trade Commission is looking into the social network's internal research examining the harms its products can have, The Wall Street Journal reports. Facebook has repeatedly argued the information released by the whistleblower Frances Haugen has been misinterpreted. One issue the FTC is likely to explore is whether Facebook should've warned users about the risks it knew about or suspected. Everything else you need to know about the latest layer of scrutiny on Facebook .

9. Assistant director didn't check the gun he handed to Alec Baldwin : The assistant director on the New Mexico set of Baldwin's film "Rust" told authorities he didn't check to make sure all the rounds in the barrel of the revolver used in last week's deadly shooting were dummy rounds, according to a newly filed court document. Santa Fe County Sheriff Adan Mendoza told reporters the gun was a .45 Long Colt revolver from which Baldwin fired a bullet. Here's what else we're learning about the case .

10. Olivia Rodrigo said Biden gave her Aviator sunglasses when she visited the White House: On a guest appearance on "Jimmy Kimmel Live!" the "Good 4 U" singer said Biden also gave her M&Ms. She also received a shoehorn, which Rodrigo said was "strange." See the rest of the teen star's comments .

Today's trivia question: In light of Halloween, which future president made his first appearance on "Saturday Night Live" wearing a mask of himself during a cold-open sketch about another candidate's Halloween party? Email your answer and a suggested question to me at bgriffiths@insider.com .

Benjamin Ginsberg, a veteran Republican election lawyer, just issued a stark warning to lawmakers in his own party: If you don’t act now to protect our system, the losing candidate in the 2024 presidential election might seek to overturn the will of the people — and succeed. Opinions to start...
PRESIDENTIAL ELECTION・11 HOURS AGO
Newsweek

A photo of a billboard insulting the President and Vice President has left the internet divided.
PRESIDENTIAL ELECTION・13 HOURS AGO
Newsweek

Capitol riot investigators have found evidence possibly linking the Trump White House to the Justice Department in efforts to overturn the results of the 2020 election.
GEORGIA STATE・1 HOUR AGO
Newsweek

At the current COVID-19 death rate, the number of American lives lost under Biden could exceed those under Trump in a few weeks.
PRESIDENTIAL ELECTION・10 HOURS AGO
Reuters

WASHINGTON, Dec 6 (Reuters) - The Biden administration on Monday vowed to crack down on "criminals, kleptocrats and others" paying cash for houses to launder money as part of a broader anti-corruption drive linked to this week's U.S. Summit for Democracy. Deputy Treasury Secretary Wally Adeyemo, speaking at the Brookings...
U.S. POLITICS・9 HOURS AGO
WashingtonExaminer

President Joe Biden advised his former boss to take a "victory lap" after then-President Barack Obama signed a 2009 law aimed at resuscitating the country's economy amid the Great Recession.
PRESIDENTIAL ELECTION・14 HOURS AGO

White House press secretary Jen Psaki sidestepped a question about the authenticity of Hunter Biden’s laptop, which he had previously dismissed as Russian disinformation, during Monday’s briefing.
U.S. POLITICS・6 HOURS AGO
Markets Insider

Americans were outraged when President Joe Biden called for the hasty retreat of American Military forces out of Afghanistan last August, a move that left 13 American servicemen and women dead, and billions of dollars in military equipment behind. Military leaders and former military members of the U.S. Congress, including...
MILITARY・1 DAY AGO
Fox News

The Senate is set to vote this week on a resolution to nullify President Biden's vaccine mandate for private companies, as Republicans and at least one Democrat push back on the administration's rule requiring vaccines or inconvenient testing rules for workers at large businesses. All 50 Senate Republicans, led by...
CONGRESS & COURTS・12 HOURS AGO

The party's own polling has the president in the red. Lawmakers know they need to get better at selling his agenda to avert midterm disaster.
PRESIDENTIAL ELECTION・13 HOURS AGO
New York Post

President Biden on Monday pointedly declined to say if he believes his sprawling social spending package can pass Congress by Christmas — amid doubts that the Democrats’ hoped-for big-spend present can pass by then, or ever. The House passed the sprawling bill last month — with a $2.2 trillion price...
NEW YORK CITY, NY・4 HOURS AGO
The Guardian

It is a festive family photo with seven broad smiles and a Christmas tree. But one other detail sets it apart: each member of the Massie family is brandishing a machine gun or military-style rifle. The photo was tweeted last week by Thomas Massie, a Republican congressman from Kentucky, with...
POTUS・7 HOURS AGO
UPI News

Dec. 6 (UPI) -- Senate Democrats pushing President Joe Biden's nearly $2 trillion spending bill began negotiations with Parliamentarian Elizabeth MacDonough on what can be considered under budget reconciliation. In an effort to escape a Republican filibuster over the massive social spending and climate bill, Democrats must convince MacDonoough that...
CONGRESS & COURTS・8 HOURS AGO

Tesla CEO Elon Musk took a jab at older lawmakers, tweeting that there should be an upper age limit for anyone planning to run for political office.
ECONOMY・2 DAYS AGO
WEKU

In October, a conference filled with anti-vaccine activists in Nashville, Tenn., received a high-profile political guest: former President Donald Trump's son Eric Trump. While portions of the younger Trump's half-hour address were typical political platitudes, some of his biggest applause lines came when he attacked COVID-19 vaccine mandates. "Do you...
POTUS・16 HOURS AGO
Markets Insider

If Congress fails to step in, 9 million kids could either slip below poverty line or fall deeper into poverty.
PRESIDENTIAL ELECTION・4 HOURS AGO