Leaders will give the Navy anything but more ships 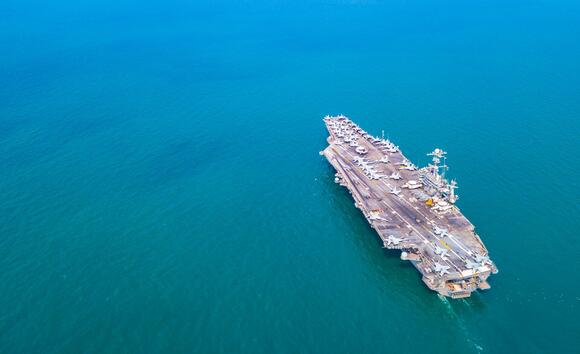 T he Navy has seen better days. In the 1980s, it reached nearly 600 ships and became an ever-present reminder of U.S. strength around the world. Today, we are just short of 300 vessels, a ceiling we have been unable to crack in 15 years. Under President Joe Biden’s direction, the fleet would shrink further.

Over the last six months, everyone in charge of the Navy has said they support the goal of building the fleet up to 355 ships. But that “support” was nowhere to be seen in the Biden budget, which called for fewer ships.

Our Navy’s leaders tell us that America is still the strongest force at sea, but the evidence shows we’re even weaker than implied by our total fleet size. The Navy has been involved in a string of disasters and blunders that raise real questions about its ability to maintain basic training and operational standards, let alone project power across the globe.

The crashes of the USS John McCain and USS Fitzgerald killed 17 sailors. Arson aboard the USS Bonhomme Richard in 2020 revealed a complete lack of readiness up and down the chain of command, and the $1.2 billion ship was destroyed. A submarine that took damage in the Pacific has to return all the way home for repairs since we long ago closed down repair facilities on Guam.

There is more than one major bribery scandal in the papers involving the Navy. Several Navy jets have crashed in Texas this year, along with a helicopter near San Diego that killed five. On top of all that, a government report says Navy sailors are tired all the time.

The Navy says its current problems can be overcome in two ways: by harnessing technology and through greater cooperation with our allies. But there are real reasons for doubt.

In October, Secretary of the Navy Carlos Del Toro pushed aside worries of a shrinking fleet by rattling off a list of high-tech catchphrases that he hoped can keep the U.S. level with China.

“Artificial intelligence. Cybersecurity. Unmanned platforms. Directed energy. Hypersonic weapons. Distributed power. These are the frontiers that will define your advantage against the People’s Republic of China, and it’s crucial that we field them expeditiously,” he said.

Less than a week later, one of the Pentagon’s top cybersecurity officials blew a hole in that plan by resigning over the Pentagon’s failure to make AI and cybersecurity a top priority. On these issues, he said, America has “no competing fighting chance against China in 15 to 20 years.”

Well, there’s always cooperation with allies, right? Del Toro and others have been making the rounds overseas to talk up a series of collaboration catchphrases that will somehow protect us.

Chief of Naval Operations Michael Gilday told Indian navy officials that cooperation would deter China. “Cooperation, when applied with naval power, promotes freedom and peace and prevents coercion, intimidation, and aggression,” he said on the Bay of Bengal.

No one is opposed to cooperation with allies. But when Taiwan faces a physical threat from China, will the assorted navies of the Indo-Pacific stand with us as we limp to the scene with our depleted force, led by a command that seems more interested in diversity and inclusion than fighting prowess? Or will China get whatever it wants?

The botched withdrawal from Afghanistan showed us the limits of placing faith in allies. We were told for years that country’s U.S.-trained security force was stronger than the Taliban, and it folded in days. Who knows what we really know about the will of our Asian partners to fight China?

A retired Navy sailor reminded me recently, “We owned the Pacific Ocean in World War II.” If we are to control our destiny there again amid China’s rise, we need more than kind words from allies, and we need more than hopeful technologies that either don’t exist or are so far from being implemented by the Pentagon that they might as well not exist.

America succeeds when it leads. America needs to get back into the business of putting ships in the water, and if our Navy leaders don’t stop making excuses for a smaller fleet, and don’t start fighting for a larger one, we have already lost.

Jason Beardsley ( @JasonRBeardsley ), a Green Beret and Navy veteran, represents veterans, active-duty sailors, and their families as executive director of the Association of the United States Navy.

If you put all these stories together, Biden is setting this country up for a foreign takeover!

Taiwan said on Sunday that dozens of Chinese military aircraft intruded into its air defense zone.
MILITARY・10 DAYS AGO
WashingtonExaminer

'Not in the cards right now': Biden says US troops won't ward off Russian invasion of Ukraine

President Joe Biden said Washington would not put troops in Ukraine for now, focusing instead on other measures as Russia masses troops along Ukraine's eastern border.
WASHINGTON, DC・9 HOURS AGO
WashingtonExaminer

China looking to build naval base on Africa’s Atlantic coast

China is reportedly looking to build a military base on the western coast of Africa, which would be its first permanent military presence on the Atlantic Ocean.
MILITARY・2 DAYS AGO
tucsonpost.com

Tokyo officials have asked the US military to investigate an incident in which an American fighter jet dropped a fuel tank that landed in a residential area. Suspicious metal objects were found in the coastal town of Fukaura, with a population of some 7,600 people, earlier this week. The debris, which landed in the center of the town, was later confirmed to be parts of an F-16 fuel tank.
AEROSPACE & DEFENSE・7 DAYS AGO

Marines and sailors who refuse the COVID-19 shot will be discharged, will lose some GI Bill benefits

Marines and sailors who choose not to get the COVID-19 vaccine by the end of November will be released from the service, in a general but honorable discharge, officials with those services have said, making them ineligible for some benefits from the GI Bill. An administrative order recently issued by...
MILITARY・19 DAYS AGO
94.3 Jack FM

MANILA (Reuters) – The Philippines will not remove a dilapidated navy ship grounded on an atoll in the South China Sea, its defence chief said on Thursday, rejecting a demand by China after it blocked a mission to resupply the vessel’s crew. Defense Secretary Delfin Lorenzana dismissed China’s assertion on...
MILITARY・13 DAYS AGO
aerotechnews.com

Littoral Combat Ship (LCS) 25, the future USS Marinette, completed its next milestone when ship sponsor, the Honorable Jennifer Granholm christened the ship by breaking a bottle of sparkling wine on the bow of LCS 25 in a ceremony at Fincantieri Marinette Marine in Marinette, Wisc. Prior to the christening,...
MILITARY・12 DAYS AGO
Navy Times

A U.S. Navy ship rescued two Iranian mariners Saturday who had been lost in the Gulf of Oman in their small open boat for more than a week. The dry cargo ship Charles Drew responded at 10 a.m. local time, after the Bahrain-based multinational coalition Combined Maritime Forces received a distress call from the mariners, the Navy said in a statement.
MILITARY・9 DAYS AGO

There is immense pressure to keep ex-Afghan Air Force aircraft out of the hands of the Taliban. Three Russian-made Mi-17 Hip helicopters that previously belonged to the now-defunct Afghan Air Force arrived at Davis-Monthan Air Force Base in Arizona yesterday and are set to be placed in storage at the boneyard there. These aircraft appear to be from among those that Afghan pilots and other personnel used to escape to neighboring Uzbekistan as the Taliban took over Afghanistan in August. This is also the first concrete evidence that American authorities are taking custody of at least some of the ex-Afghan military aircraft now scattered around the world, the vast majority of which were originally purchased by the U.S. government.
AEROSPACE & DEFENSE・18 DAYS AGO
Times of San Diego

General Dynamics NASSCO began construction Wednesday of the fifth ship in the Navy’s expeditionary sea base program, a class of large ships with storerooms, barracks and a landing deck to support special-forces operations. The future USS Robert E. Simanek will be 784 feet long and support a 52,000 square-foot flight...
SAN DIEGO, CA・7 DAYS AGO
KHON2

HONOLULU (AP) — Hawaii’s governor and congressional delegation have called on the Navy to suspend operations at World War II era fuel tank farm that sits above an aquifer that supplies water to urban Honolulu. The call from the elected leaders comes as Navy Secretary Carlos Del Toro is set...
HAWAII STATE・2 DAYS AGO
Telegraph

An American nuclear artillery unit has been reactivated in Germany for the first time since the Cold War and is to be armed with new long-range hypersonic weapons. The US Army officially recommissioned the 56th Artillery Command in Germany this week during a ceremony in Mainz-Kastel, which hosts America’s Europe and Africa commands.
MILITARY・28 DAYS AGO

"If it doesn't threaten China, why are we doing it?" the Air Force secretary said at a recent defense event.
AEROSPACE & DEFENSE・1 DAY AGO
floridianpress.com

Americans were outraged when President Joe Biden called for the hasty retreat of American Military forces out of Afghanistan last August, a move that left 13 American servicemen and women dead, and billions of dollars in military equipment behind. Military leaders and former military members of the U.S. Congress, including...
MILITARY・3 DAYS AGO
Washington Times

The first USS New Jersey was a turn-of-the-century battleship that circumnavigated the globe for two years as part of President Theodore Roosevelt’s “Great White Fleet.” The next was a World War II naval legend, earning nine battle stars in the Pacific theater before returning to service three more times over the next 50 years: in Korea, Vietnam and in the dying days of the Cold War with the Soviet Union.
MILITARY・26 DAYS AGO
Business Insider

In many ways, the Japanese attack on Pearl Harbor on December 7, 1941, was the perfect military operation. The attacking Japanese task force achieved almost complete tactical surprise, remarkably evaded detection during a 3,000+ mile sortie, successfully employed specially developed secret weapons against US forces and managed to escape with minor losses.
MILITARY・1 DAY AGO

Meet US Navy's Last Line of Defense: An Autonomous Gun Against Missiles

When it comes to war, we often focus on the offense and how debilitating our attack options are. However, adversaries are also upping the ante on their attack options, and that is where an effective defense system works wonders. The MK15 Phalanx Weapon System is a prime example of defense that can make the difference between a floating ship and a sunken one.
MILITARY・2 DAYS AGO
thedrive

3 Myths About Pearl Harbor, According to a Military Historian

Tuesday marks the 80th anniversary of the Japanese attack on Pearl Harbor on Dec. 7, 1941, killing some 2,400 American servicemen and leading the U.S. to enter World War II. And 80 years later, myths and misunderstandings persist about what President Franklin Roosevelt called “a day that will live in infamy.”
MILITARY・1 DAY AGO