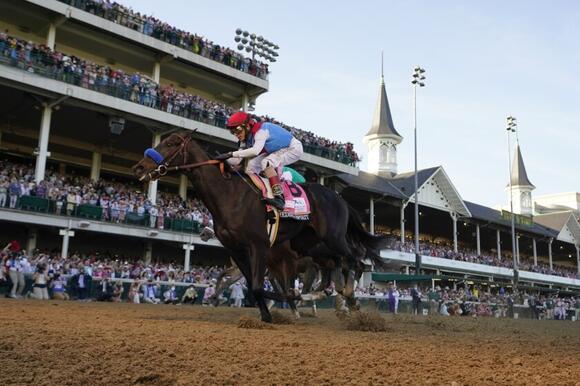 The Classic field was among the 196 horses, including a record 56 from overseas, pre-entered Wednesday for the $31 million, 14-race world championships on Nov. 5-6 at Del Mar. Fans are returning to the Breeders’ Cup for the first time since the coronavirus pandemic kept them away last year at Keeneland.

Knicks Go is Cox’s other entry in the 1 1/4-mile Classic to be run Nov. 6 live in prime time on NBC. The Classic has implications for the Horse of the Year award.

Cox tied the record for most Breeders' Cup wins with four last year.

Medina Spirit is overseen by Bob Baffert, the all-time leader among trainers in Breeders’ Cup earnings at nearly $36 million. He currently is embroiled in legal fights in New York and Kentucky for multiple positive drug tests involving some of his horses.

The Breeders’ Cup is allowing Baffert to enter horses (he has eight total), but he has to meet certain conditions, including stricter out-of-competition testing of his horses and greater security at his barn. He has agreed to the tightened standards.

After his Derby win on May 1, Medina Spirit tested positive for the corticosteroid betamethasone, which isn’t allowed on race day in Kentucky. The Kentucky Horse Racing Commission has yet to issue a final decision as part of its investigation into the matter.

Three of Baffert’s Breeders’ Cup pre-entries — Barossa, Corniche and Pinehurst — are in the $2 million Juvenile, whose winner is tabbed as the early favorite for the next year’s Kentucky Derby. Besides Baffert’s trio, Todd Pletcher, Christopher Davis and Hideyuki Mori have two runners each.

However, Baffert has been banned from the Derby in 2022 and 2023 as part of his suspension by Churchill Downs.

The New York Racing Association wants to ban Baffert from running at its tracks. He has had five failed drug tests dating back to May 2, 2020.

Another of Baffert's top entries is Gamine in the $1 million Filly & Mare Sprint, which attracted just six other runners, perhaps because of his filly's intimidating presence.

Others pre-entered in the $6 million Classic are Art Collector, Express Train, Idol, Max Player, Stilleto Boy and Tripoli. Stilleto Boy could run in Dirt Mile instead.

Del Mar is hosting the richest two days in North American racing for the second time since 2017.

Final entries and the post-position draw is Monday.

The world championships will open with five races for juveniles in what’s billed as Future Stars Friday on Nov. 5, followed by nine races on Nov. 6.

(Bob Baffert / Photo by Holly M. Smith) A Statement from Trainer Bob Baffert, regarding the fallen Medina Spirit:. “It is with great sadness that I am reporting Medina. Spirit passed away today from a heart attack at Santa. Anita following a workout. My entire barn is devastated. by this...
SPORTS・2 DAYS AGO
bizjournals

Medina Spirit, the Kentucky Derby-winning horse that failed a drug test following the race, died Monday morning following a workout, according to newsgathering partner WLKY-TV. The horse, trained by Bob Baffert, crossed the finish line first during the May 1, 2021 race, but ended up testing positive for a steroid...
ANIMALS・2 DAYS AGO
Tampa Bay Times

Urine testing of Kentucky Derby winner Medina Spirit has shown that a steroid present in the colt’s system came from a topical ointment and not an injection, an attorney for trainer Bob Baffert said Friday. Medina Spirit tested positive for the steroid betamethasone after winning the May 1 race and...
POLITICS・4 DAYS AGO
103.9 The Breeze

Remembering ‘Medina Spirit’, The Legend That Almost Was in Saratoga

What is Medina Spirit's legacy following his sudden death? The answer is uncertain

Medina Spirit, who died Monday at Santa Anita, was an underdog who won the Kentucky Derby. But a potential disqualification could alter how he is perceived.
ANIMALS・1 DAY AGO
CBS Baltimore

(AP/WJZ) — Medina Spirit, the highly scrutinized Kentucky Derby winner who underwent a series of drug tests to run in the Preakness Stakes, collapsed and died after a workout Monday at Santa Anita. The 3-year-old colt trained by Bob Baffert had just completed five furlongs in his second workout since finishing second in the Breeders’ Cup Classic a month ago at Del Mar, according to Craig Robertson, Baffert’s attorney. Baffert said in a statement that the horse suffered a heart attack. “My entire barn is devastated by this news,” Baffert said. “Medina Spirit was a great champion, a member of our family...
CALIFORNIA STATE・2 DAYS AGO
The US Sun

What happened to Medina Spirit?

MEDINA Spirit was the winner of 2021's Kentucky Derby, which took place in May. On Monday, December 6, 2021, Medina Spirit reportedly died during a workout. Medina Spirit passed away Monday morning after suffering a heart attack during a workout at the Santa Anita racetrack in California. The colt was...
SPORTS・2 DAYS AGO
San Diego Union-Tribune

My first look at Del Mar came in June of 1969 on a clever misdirection ploy by Steve Scholfield. Best friends through high school and college we had parted company in 1968 when “Scholf” left our home state of Michigan to seek his fortune in California and landed a job as the sports editor – and only full-timer in the department – at the Oceanside Blade-Tribune.
DEL MAR, CA・12 DAYS AGO
San Diego Union-Tribune

The 3-year-old colt trained by Bob Baffert had just completed five furlongs in his second workout since finishing second in the Breeders' Cup Classic a month ago at Del Mar
DEL MAR, CA・2 DAYS AGO
Ocala Star Banner

'We'll never get to know just how good he was': Kentucky Derby champ Medina Spirit has died

For Christy Whitman, owner of Whitman Sales in Ocala, 2021 Kentucky Derby winner Medina Spirit’s legacy “should have been a Seabiscuit fairytale story.”. After the 3-year-old suddenly died of a heart attack on Monday while working out at Santa Anita Park in California, however, she fears the Ocala-bred horse's story “will fade away in a swirl of speculation and controversy.”
OCALA, FL・2 DAYS AGO
LIVESTRONG.com

The Average 5K Time — and How to Improve Yours

Although average 5K times vary by age and sex, national averages can help you estimate how you'll perform on your first 5K. Check our 5K time and pacing chart.
SPORTS・1 DAY AGO

The Maryland Jockey Club and its parent company, The Stronach Group, have canceled a second weekend of racing at Laurel Park as officials continue working on improvements to the track’s dirt surface after eight horses suffered fatal breakdowns in October and November. The Stronach Group’s chief operating officer, Aidan Butler, and the president of its racing division, Mike Rogers, appeared ...
BALTIMORE, MD・1 DAY AGO
NBC Los Angeles

Medina Spirit, the 2021 Kentucky Derby winner, collapsed and died after a workout at Santa Anita Park on Monday morning. The California Horse Racing Board's Equine Medical Director Jeff Blea confirmed the three-year-old horse's passing and said that he ordered a comprehensive autopsy be done to determine the cause of death.
SPORTS・2 DAYS AGO
CBS Baltimore

LAUREL, Md. (WJZ) — Maryland horse racing regulators questioned executives with Laurel Park after eight horses suffered injuries and had to be euthanized since early October. The Maryland Racing Commission will reportedly make a final decision one week from today on whether racing can resume at Laurel. If they give the green light, it will start again on December 16th. The latest incident happened on Nov. 28, when American Playboy suffered injuries that would later prove fatal. “When you have a number of injuries, something sends a red flag and you’re not too sure what’s going to happen so you try to minimize...
MARYLAND STATE・1 DAY AGO
reviewjournal.com

After splitting first-place money in his long-anticipated National Finals Rodeo debut Thursday night, legendary bull rider J.B. Mauney spoke at length about experiencing the thrill of victory on his sport’s biggest stage. Less than 24 hours later, he was dealing with the agony of defeat. Mauney was helped from the...
PUBLIC SAFETY・4 DAYS AGO
The Guardian

Medina Spirit, the horse at the centre of a doping controversy at this year’s Kentucky Derby, has died during a workout. The colt suffered a suspected heart attack while working out at California’s Santa Anita track on Monday. “Near the end of his breeze this morning, he did not feel...
ANIMALS・2 DAYS AGO
KNX 1070 News Radio

Track officials at Laurel Park suspended thoroughbred workouts and called off three planned racing cards for this weekend after eight horses suffered fatal fractures in October and November while racing or training over the recently installed dirt surface at the facility. “While racing is suspended, the Maryland Thoroughbred Horsemen’s Association and the Maryland Jockey Club are working with ...
BALTIMORE, MD・6 DAYS AGO
San Diego Union-Tribune

New CEO of US skiing 'confident' of Olympic results, medals

The new president and CEO of U_S_ Ski & Snowboard says she is "confident" of good results at the Beijing Olympics and hopeful for "a bunch of medals."
SAN DIEGO, CA・2 HOURS AGO