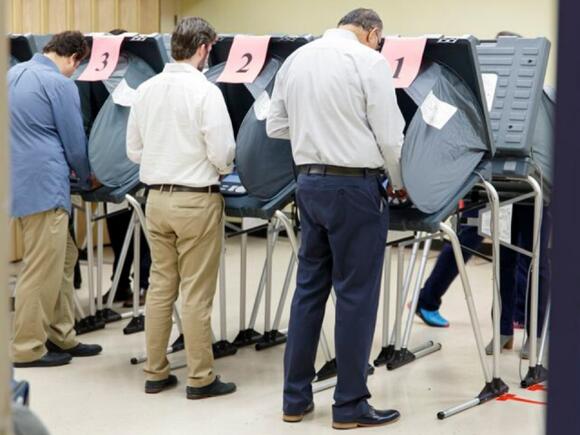 Voting rights advocates are suing Texas again, this time with support from a former U.S. attorney general, over the state’s newly redrawn congressional district maps that favor the GOP, claiming the maps dilute the vote of communities of color after growth in America’s largest red state was overwhelmingly Hispanic, Black and Asian American people.

Texas was the only state to be allocated two new congressional seats earlier this year after U.S. Census figures showed the state’s population grew by 4 million people, nearly half of which were Hispanic. Texas will now have 38 representatives in Congress and 40 electoral votes — second only to California.

The latest lawsuit alleges that the new U.S. House maps violate the 1965 Voting Rights Act by not giving people of color a fair opportunity to elect their representatives. The maps do not include any additional districts in which Black or Hispanic voters make up more than 50% of eligible voters, and census data shows more than 9 of 10 of Texas’ new residents in the past decade were people of color.

It comes on the heels of a separate lawsuit filed by the Mexican American Legal Defense and Educational Fund this month, which makes similar claims.

Holder said the redrawn districts come as the demographics of the Lone Star State are shifting quicker than the policies of the Texas GOP.

“The map has been crafted with really surgical precision to eliminate competitive districts at the expense of the states’ communities of color,” he said.

Texas Sen. Joan Huffman, a Republican who authored the maps and chairs the state Senate’s redistricting committee, and Abbott did not immediately respond to the Associated Press’ requests for comment. Huffman said prior to Tuesday that the maps were “drawn blind to race.”

The state has had to defend their maps in court after every redistricting process since the Voting Rights Act took effect in 1965, but this is the first since a U.S. Supreme Court ruling said Texas and other states with a history of racial discrimination no longer need to have the Justice Department scrutinize the maps before they are approved.

Texas Democrats tried to amend the maps during the state’s third special session focused on redistricting in September, but failed to pass amendments in either of the state’s GOP-controlled chambers that created new Black or Hispanic opportunity districts.

Proposed maps in other GOP-controlled Legislatures that Republicans claim were drawn without race in mind have also been under scrutiny for favoring Republican lawmakers while diluting the influence of minority voters.

The U.S. Supreme Court ruled in 2019 that federal courts cannot void maps drawn unfairly based on partisanship. But state courts still can overturn maps for being too partisan.

And if mapmakers explicitly try to weaken voters’ power based on race, they may violate the U.S. Constitution’s guarantee of equal protection. The Voting Rights Act requires them to consider race if the state has “racially polarized” voting, meaning white people consistently vote against candidates backed by racial minority or ethnic groups. The mapmakers must then draw a district a plurality or majority of voters so that minority group can elect their preferred candidates.

Maria Teresa Kumar, president and CEO of Voto Latino, said they are prepared to work their complaint up through the courts to protect fair representation for Texans, and hope this lawsuit will serve as a roadmap for other organizations and states.

“We need to make sure that we are creating a map that reflects the diverse America that is emerging,” Kumar said.

It remains unclear whether Gov. Greg Abbott — the only official with the power to convene special sessions — will order state lawmakers back to Austin, or what issues he would include on the agenda.
TEXAS STATE・18 HOURS AGO
Dallas News

COLUMBUS, Ohio (AP) — Ohio’s newly drawn map of congressional districts was hit with its first constitutional challenge, which alleges the boundaries represent partisan gerrymandering by Republicans. The lawsuit was filed Monday in Ohio Supreme Court by the National Democratic Redistricting Committee’s legal arm on behalf of a group of...
OHIO STATE・7 DAYS AGO
forwardtimes.com

No Rights Without Voting Rights

Black women leaders have been working on the issue of voting rights, calling for the passage of the John Lewis Voting Rights Act, the Freedom to Vote Act, the Build Back Better Reconciliation Act, and DC Statehood. Several leaders, including Melanie Campbell, CEO of the National Coalition of Black Civic Participation, and Janice Mathis, Executive Director of the National Council of Negro Women, were arrested a couple of weeks ago.
POLITICS・7 DAYS AGO

This is an op-ed by Rebecca Rolfes, a past president of the League of Women Voters of Coastal Georgia, a chapter of the 101-year old voting rights organization Well, that was fast. ...
GEORGIA STATE・8 DAYS AGO
Gainesville Daily Register

Over $35B in federal funding headed to Texas; GOP lawmakers object

AUSTIN — Several Republican lawmakers representing Texas agreed there is a need for renewed infrastructure investment nationwide and even acknowledged its direct usefulness to Texas, yet all 23 of the state's conservative representatives in Congress voted against the recently signed $1.2 trillion Infrastructure Investment and Jobs Act. The law promises...
TEXAS STATE・9 DAYS AGO
MSNBC

With a stringent anti-voting law on the books and Republicans drawing up redistricting maps that heavily favor Republican voters, Georgia voting rights activists are hard at work making sure there is equal access to the ballot box. Two of them, Nsé Ufot of the New Georgia Project and Helen Butler with the Georgia Coalition for the People’s Agenda, join to discuss.Nov. 20, 2021.
GEORGIA STATE・11 DAYS AGO
wunc.org

The haze of bipartisanship around the passage of a state budget the governor has pledged to sign had barely subsided Thursday when Republicans and Democrats in the North Carolina General Assembly quickly returned to their respective sides of the political divide, this time over GOP-backed elections legislation. The state House...
ELECTIONS・12 DAYS AGO

In what is sure to be a long court fight over the newly drawn congressional and legislative district maps, the State of Texas has a new, novel defense; no one is allowed to challenge them. The new maps are under legal challenge based on the fact that they underrepresent minorities...
TEXAS STATE・12 DAYS AGO
thefulcrum.us

With the 2021 redistricting cycle in full swing, one-third of the country has already solidified some of its new state and federal districts for the next decade. Sixteen states have completed at least one redistricting plan so far, with 11 of them finalizing maps for both Congress and the state legislature (setting aside states with one congressional district). But the mapmaking process is far from over due to several legal challenges already filed against states for potential voting rights violations.
POLITICS・13 DAYS AGO
spokanepublicradio.org

Gov. Abbott promises 'the lights will stay on' if another winter storm hits Texas

Abbott says his guarantee is backed by nearly a dozen measures he signed into law this year that make the state's power grid more effective.
TEXAS STATE・38 MINUTES AGO

AUSTIN — The state’s new six-week abortion ban doesn’t just cut off the procedure in the here and now. It could make it harder to challenge any state abortion restriction in the long term. Under a little-noticed provision of the Texas law, the nation’s most stringent anti-abortion measure, lawyers who...
TEXAS STATE・1 DAY AGO
Cleveland.com

COLUMBUS, Ohio -- A coalition of voting-rights groups and the American Civil Liberties Union have sued over Ohio’s new Republican-drawn congressional map, asking the Ohio Supreme Court to throw it out as an illegal gerrymander. In the lawsuit, filed late Tuesday, the ACLU, the League of Women Voters of Ohio...
OHIO STATE・1 HOUR AGO
Marietta Daily Journal

ATLANTA — Georgia’s state Senate adopted a Republican-drawn congressional map on Friday over the objections of Senate Democrats.The Georgia House is expected to follow suit on Monday, ending a months-long partisan battle to decide the state’s political future for the next decade. The GOP-controlled Senate voted along party lines, 32-21,...
ATLANTA, GA・11 DAYS AGO
Austin American-Statesman

WASHINGTON – The U.S. Supreme Court will hear arguments Wednesday in a major challenge to Mississippi's 15-week ban on abortion, a case that will have major implications in Texas and other conservative states. The new abortion law in Texas, the nation's most restrictive, prohibits the procedure after six-weeks gestation and allows any private individual...
MISSISSIPPI STATE・38 MINUTES AGO

Omicron variant 'not a cause for panic' for POTUS, Texas Governor candidates

While the Omicron variant of COVID-19 has experts concerned, two Texas Governor candidates have been somewhat silent about the new variant.
TEXAS STATE・1 DAY AGO
Houston Chronicle

Republican Commissioners Jack Cagle and Tom Ramsey have filed a voting rights lawsuit in state court in hopes of halting a Harris County redistricting plan they claim strips more than 1.1 million people of their right to vote in 2022. Cagle and Ramsey, who are in the political minority in...
HARRIS COUNTY, TX・14 DAYS AGO
houstonpublicmedia.org

Republican commissioners and a group of voters sued Harris County on Tuesday over newly approved precinct maps they say will ensure a Democratic supermajority on Commissioners Court. Under the new maps, which drastically change three of four Harris County precinct boundaries, the suit argues among other things that one Republican...
HARRIS COUNTY, TX・14 DAYS AGO
texasstandard.org

South Texas Democrat Ryan Guillen jumps to the GOP. He’ll run in a House district drawn to favor a Republican.

South Texas Democratic Rep. Ryan Guillen announced Monday he will switch to the Republican Party. The last legislative party switch in Texas came ten years ago, when another South Texas Democrat jumped ship for the GOP. Mark Jones is a fellow in political science at the Baker Institute at Rice...
TEXAS STATE・14 DAYS AGO