GM program to install more EV chargers across US, Canada 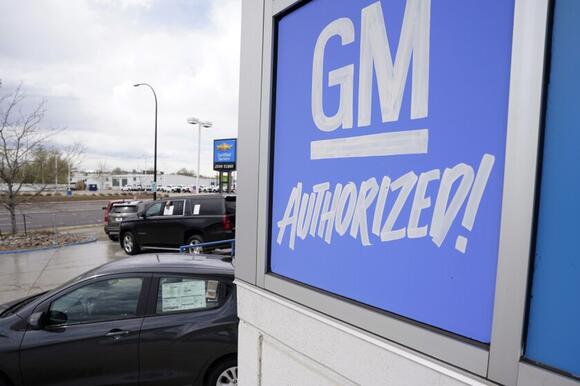 General Motors is planning to install up to 40,000 electric vehicle chargers across the U.S. and Canada as part of a new community charging program.

The vehicle maker said Tuesday that the program will start next year. It will work with its dealers to have the charging stations in locations including workplaces, multi-unit dwellings, sports and entertainment venues and college and universities. According to the company, nearly 90% of the U.S. population lives within 10 miles of a GM dealer.

The charging stations will not be limited to those that have GM vehicles. They will be available to anyone that has an electric vehicle, regardless of the brand.

The program is part of a series of investments the Detroit company announced earlier this month. GM then pledged to increase its investment in EV charging networks by nearly $750 million through 2025.

The announcement comes a day after Hertz ordered 100,00 Model 3 small cars from Tesla — and announced plans to set up its own charging network — due to growing consumer interest in electric vehicles.

Volvo-backed Polestar is already way ahead of many hot EV names, and now its growth plan is shifting into high gear.
BUSINESS・3 DAYS AGO
Benzinga

Cathie Wood Sells Another $87.5M In Tesla And Initiates Position In This Chinese EV Stock

How to buy, install and use an electric car charger

It's more than just plugging into the wall outlet. Here are the basics, plus the factors that may be big decision-makers for you, such as convenience and cost
TECHNOLOGY・10 DAYS AGO
TechRadar

GM will bring 13 new EVs, including the Hummer EV, to the Middle East by 2025

General Motors Co. yesterday announced 13 new Electric Vehicles (EVs) will be launched in the Middle East by 2025, starting with the Chevrolet Bolt EUV, GMC Hummer EV and Cadillac Lyriq. At the event the brand stressed on its aim to ‘have an EV for every wallet and every customer’....
ECONOMY・13 DAYS AGO

General Motors is dipping a toe back into the marine power business. The announcement of GM taking a $150 million stake in a boat startup on Monday may come as surprising to some, but buying into a company that’s making electric boats is just another part of the company’s transition to electric vehicles.
ECONOMY・13 DAYS AGO
eenews.net

An official with automaker General Motors Co. today called for the U.S. government to speed up mine permitting in order to feed minerals to electric vehicle manufacturing plants at home. Fill out the form to read the full article. By signing up, you agree to receive E&E News email updates...
INDUSTRY・14 DAYS AGO
MotorTrend Magazine

With electric vehicles like the Lucid Air becoming not only commonplace but also encouraged on a regulatory level, many non-EV owners have asked, "how will we charge them?" The U.S. has (mostly) solved this with charging stations placed near existing roadways thanks to our expansive landscape. However, in a country like England, land isn't as easy to get and put aside for just EV charging.
CARS・13 DAYS AGO
SlashGear

GM’s EV roadmap is getting wet

General Motors is wading into boating, splashing out on a 25% stake in a US EV firm specializing in electric boat propulsion systems. Pure Watercraft is a Seattle-based company that developed a zero-emissions outboard motor which is not only near-silent, but requires no maintenance either. The Pure Outboard system looks,...
ECONOMY・14 DAYS AGO

Although General Motors (NYSE: GM) brought nothing to the LA Motor Show, it will begin its GMC Hummer deliveries just in time for Christmas. The brand's chief said on November 23rd that deliveries will begin in December. Also, the automaker revealed that President Joe Biden's last week's visit to the company's Factory Zero plant pickup contributed to reservations for the above-mentioned truck increasing sevenfold compared to an average day.
CARS・12 DAYS AGO
GeekyGadgets

Starting in January of 2022, Kampgrounds of America (KOA) will begin installing electric vehicle charging stations at select locations. There are currently 525 locations across the U.S. and Canada, so there's potential to add a lot of charge points to the map, especially in rural locations where there is often a shortage of places to plug in.
CARS・11 DAYS AGO
gmauthority.com

General Motors has confirmed the estimated real-world driving range of the 2022 GMC Hummer EV Pickup Edition 1. The 2022 GMC Hummer EV Edition 1 will be able to travel up to 329 miles on a full charge, GM announced this week. For those who may need a reminder, the Hummer EV Edition 1 features a 1,000 horsepower tri-motor powertrain and an ~200 kWh Ultium lithium-ion battery. With ‘Watts to Freedom’ mode engaged, this model variant will be able to accelerate from zero to 60 mph in roughly three seconds.
CARS・13 DAYS AGO

In collaboration with Golden Valley Electric Association (GVEA), FLO, an electric vehicle (EV) charging network in North America, has inaugurated two DC Fast Chargers (DC FC) in Fairbanks, Alaska. These are FLO’s first chargers in the state. At the time of installation, they will be the most northern fast public EV chargers in North America recorded in the U.S. Department of Energy’s Alternative Fuels Data Center.
ALASKA STATE・12 DAYS AGO
InvestorPlace

Nissan announces nearly $18 billion of EV investment … eyes on the EV “tipping point” … it’s hard to be too bullish about this battery metals trade. Another day, another story of billions of dollars flowing into electric vehicles and batteries. Yesterday, Nissan announced plans to spend $17.6 billion over...
ECONOMY・6 DAYS AGO
insideevs.com

Ford looks set to sell more electric vehicles in the US this year than General Motors, according to Morgan Stanley analyst Adam Jonas. In a note to investors released to the media on November 30, Jones points out that the Ford Mustang Mach-E will likely outsell the Chevrolet Bolt EV and Bolt EUV in the final two months of 2021.
ECONOMY・5 DAYS AGO
nfcw.com

Customers at Paradies Lagardère retail outlets at 20 additional airports across the US and Canada can now scan and pay for the products they select with their own mobile device without needing to visit a checkout. The US-based retailer is expanding the service after pilots at Fort Lauderdale-Hollywood International Airport...
CELL PHONES・10 DAYS AGO
wri.org

In 2021, the Biden Administration and American automakers, set a goal for electric vehicles (EVs) to make up 50% of new vehicle sales by 2030. Achieving this ambitious target will not be possible without making EVs more affordable to everyone and a corresponding effort to install over 1.8 million public charging stations — 40 times the current volume of chargers in the United States.
CARS・6 DAYS AGO
electrek.co

Ford likely to have more EV sales than ‘all in’ GM for 2021, analyst concludes

According to a recent research study by Morgan Stanley, Ford Motor Company is on pace to outsell General Motors (GM) in the EV market for 2021. The research compares Ford’s EV sales through the first 10 months of this year against GM’s, while noting the latter’s halt to Bolt production.
ECONOMY・6 DAYS AGO
SlashGear

You can’t build electric cars without batteries, and GM is announcing a new joint venture that it hopes will bring down costs and boost performance as it launches EVs at $30,000 and below. The automaker plans to source, process, or manufacturer the majority of its Ultium electric vehicle batteries in North America by 2025, with the aim of reducing reliance on what’s already looking like a stretched supply chain.
ECONOMY・5 DAYS AGO