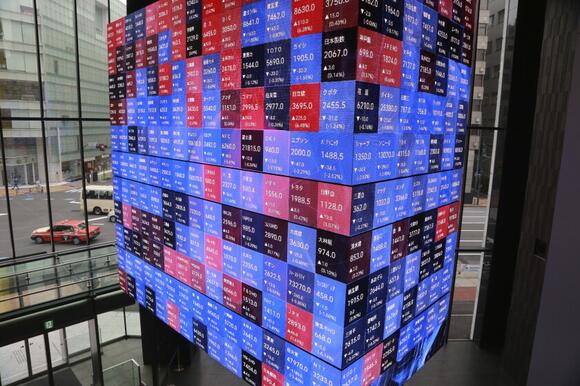 Asian stock markets fell Wednesday after Australian inflation increased, highlighting global pressure for prices to rise, while investors looked ahead to U.S. economic growth data due out this week.

Wall Street's S&P 500 index rose 0.2% on Tuesday to its second high in two days, driven by strong earnings reports by some major companies.

Australia's government reported its underlying inflation rate rose by 0.7 percentage points to 2.1% in the quarter ending in September. Fuel costs rose by a record 7.1%.

Investors worry rising inflation as economies recover from the coronavirus pandemic might put pressure on central banks to roll back economic stimulus that is boosting stock prices.

“A jump in Australian core inflation highlighted intensifying cost pressures in the global economy,” said Anderson Alves of ActivTrades in a report.

Investors were waiting for U.S. economic growth data due out Thursday that might influence whether the Federal Reserve changes its timeline for reducing stimulus.

UPS jumped 6.9% for the biggest gain in the S&P 500 on stronger third-quarter profits than expected due to higher shipping rates. Hasbro rose 3.2% after the maker of Transformers, My Little Pony and other toys reported solid financial results.

Chipmaker Nvidia rose 6.7%. Health care stocks and a mix of companies that rely on consumer spending for goods and services also made solid gains. UnitedHealth Group rose 1.2% and Amazon.com rose 1.7%.

In energy markets, benchmark U.S. crude lost 47 cents to $84.18 per barrel in electronic trading on the New York Mercantile Exchange. The contract rose 89 cents on Tuesday to $84.65. Brent crude, the price basis for international oils, shed 33 cents to $85.32 per barrel in London. It closed 41 cents higher the previous session at $86.40.

Stocks are mostly higher in Europe and Asia after another broad rally on Wall Street as investors wager that the new variant of the COVID-19 virus won't pose a big threat to the economy
SAN DIEGO, CA・42 MINUTES AGO
MarketWatch

Gold futures edge up, even as dollar, yields inch higher

Gold futures were rising slightly on Tuesday, but a rally in global stocks, an advance in Treasury yields and a firming dollar may cap the move for the precious commodity. was trading $4.50, or 0.3%, higher at $1,784 an ounce, after the yellow metal on Monday lost 0.3%. Treasury yields...
MARKETS・21 HOURS AGO

U.S. stock benchmarks gained sharply for another session as investors focused on early reports that the omicron variant of coronavirus that causes COVID-19 is less severe than originally feared. The Dow Jones Industrial Average was climbing 1.1%, or nearly 400 points, at 35,623, the S&P 500 index climbed 1.4% to reach 4,657, and the Nasdaq Composite Index rose 2.2% to 15,545. On the corporate front, Intel shares surged 5.6%, amid a plan to list shares in its Mobileye self-driving-car unit. Meanwhile, shares of American Airlines Group Inc. rose 2.1% Tuesday, after the air carrier said Chief Executive Doug Parker will retire, effective March 31, 2022, after about nine years in the role.
STOCKS・20 HOURS AGO
InvestorPlace

Fintech stocks have not enjoyed the tail end of 2021. The two largest ETFs investing in fintech, Global X Fintech ETF (NASDAQ:FINX) and Ark Fintech Innovation ETF (NYSEARCA:ARKF), are down 15.2% and 18.9% respectively over the past three months ended Dec. 2. The components of FINX and ARKF, Cathie Wood’s...
STOCKS・16 HOURS AGO
The Motley Fool

Why These 2 Stocks Got Crushed in a Booming Market

Not every company participated in the rally.
STOCKS・12 HOURS AGO
The Motley Fool

Despite their move higher today, the Facebook parent's shares are still trading much lower than they were a few months ago.
STOCKS・12 HOURS AGO

The Omicron variant has rocked stock markets, but investors are upbeat after reports that symptoms are mild.
MARKETS・34 MINUTES AGO
MarketWatch

Why Alibaba Stock Is Surging Today

After a huge sell-off last month, some fears around Alibaba were allayed on Monday, and a management change was further welcomed by shareholders.
STOCKS・1 DAY AGO
DailyFx

Meme stocks took a beating on Friday, and Monday did not appear to be getting off to a better start.
STOCKS・1 DAY AGO
New York Post

The Dow Jones Industrial Average jumped more than 700 points on Monday as stocks continued to swing wildly by the day amid the uncertain threat of the Omicron variant of the coronavirus. The Dow was last seen surging 734 points, or more than 2.1 percent higher, at 35,315 as investors...
STOCKS・1 DAY AGO
MarketWatch

AMSTERDAM, NETHERLANDS - DECEMBER 02: The passenger of a flight from South Africa is tested for the Coronavirus at Amsterdam Schiphol airport on December 2, 2021 in Amsterdam, Netherlands. The Netherlands and other nations worldwide temporarily banned most travellers from South Africa after a new variant of Covid-19 named Omicron was discovered. Omicron has sparked worries around the world that it could resist vaccinations and prolong the nearly two-year Covid-19 pandemic. (Photo by Pierre Crom/Getty Images) By Pierre Crom/Getty Images MARKET SNAPSHOT.
STOCKS・1 DAY AGO
Los Angeles Times

A version of this story first appeared in CNN Business' Before the Bell newsletter. Not a subscriber? You can sign up right here. You can listen to an audio version of the newsletter by clicking the same link. London (CNN Business) — Over the past week, as markets were churning...
CURRENCIES・1 DAY AGO
MarketWatch

This picture taken on November 8, 2020 shows a jewellery craftsman cleaning gold rings at the Makmur Gold workshop in Kota Bharu in Malaysia's Kelantan state. - Demand for the safe-haven commodity has soared in Malaysia during the coronavirus pandemic and it is not only professional investors who are cashing in, but small businesses too. (Photo by Mohd RASFAN / AFP) / TO GO WITH Health-virus-Malaysia-economy-gold, FOCUS by Patrick Lee (Photo by MOHD RASFAN/AFP via Getty Images) By mohd rasfan/Agence France-Presse/Getty Images METALS STOCKS.
BUSINESS・1 DAY AGO
The Independent

Shares were mostly lower in Asia on Monday after troubled Chinese property developer Evergrande warned late Friday it may run out of money. Investors also are struggling with uncertainty about the newest coronavirus variant and about when the Federal Reserve will cut off its support for markets. “This is a week that will force uncomfortable contemplation about ‘known unknowns’ mainly associated with omicron, Fed tightening and China (regulatory/property) risks,” Mizuho Bank said in a commentary.That will bring still more uncertainty after a tumultuous spell last week, it said. Hong Kong dropped 1.8% and the Shanghai Composite index gave up...
ECONOMY・2 DAYS AGO
KABC

(New York, NY) — December isn’t being very kind to stocks so far. The month started off with big gains at the opening bell, but the major indexes lost all their momentum after health officials confirmed the U.S. now has a case of the new Omicron variant. It was found in California. At the closing bell, the Dow Jones Industrial Average lost 462 points to 34-022. The S&P 500 dropped 54 points to 45-13. The Nasdaq fell 284 points to 15-254.
NEW YORK CITY, NY・6 DAYS AGO