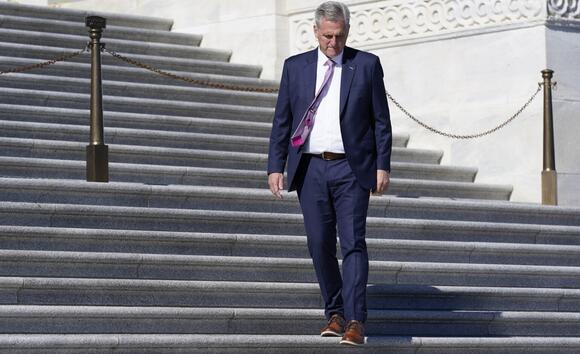 "This is an unforced error that we're experiencing right now in regard to prices," Rep. Garret Graves of Louisiana said during an energy roundtable, assigning blame to Biden policies such as his revocation of the Keystone XL pipeline and oil and gas leasing moratorium.

'NO REASON' FOR US TO CHOOSE BETWEEN STANDING UP TO CHINA AND SOLAR SUPPLY CHAIN, WHITE HOUSE SAYS

Republicans warned especially about the foreign policy implications raised by U.S. reliance on the global energy market, arguing restrictions on domestic fossil fuel production and the mining of critical minerals give adversaries a leg up.

"They're trying to manipulate markets and force us in a direction of taking on things like solar and wind energy and other renewable sources that, look, have an important role in our energy future, but by manipulating markets the way that you are without having domestic production ... All this does as we've seen in history plays into the hands of Russia and makes us dependent on them for energy because we get it cheaper," Graves said.

"The saddest part about this is, we don't have to rely on somebody else," House Republican Minority Leader Kevin McCarthy said. "God blessed this nation with natural resources. We care for them better than any other nation. We do it in an environmentally sound way, but if we do not produce it here, we will still consume it. So, we're harming the environment by consuming it someplace else."

The entire globe is reckoning with high energy prices at the moment, as prices for oil, gas, and coal stand at their highest point in years, and the high energy costs coincide with Democrats' efforts to pass an ambitious budget package aimed at mitigating climate change by reducing reliance on fossil fuels.

The reconciliation package remains under negotiation, and the proposal perhaps most punitive to the fossil fuel industry — the clean electricity payment program — appears dead due to opposition from key vote Sen. Joe Manchin.

Republicans deflect and projectAmerican people need to Fact Check, with Factcheck.orgclean energy will create Millions of jobs, help save our Climate.Republicans only care about Oil, Coal, old damaging means of energy.I wish the American people, had better education, more Empathy and Compassion.25% of our Nation, is lacking a Moral compass

McCarthy give it up. You and the Republicans had a chance to put your input and you all refused...

Rep. Alexandria Ocasio-Cortez called on Senate Democratic leaders on Tuesday to override the parliamentarian and include a pathway to citizenship in President Joe Biden’s $1.75 trillion Build Back Better legislation.
CONGRESS & COURTS・18 HOURS AGO
WashingtonExaminer

Jessica Rosenworcel received Senate approval Tuesday to lead the Federal Communications Commission and is now positioned to move the agency to the left, with an eye toward restoring net neutrality and tightening telecommunications regulations.
CONGRESS & COURTS・23 HOURS AGO
AOL Corp

That was the worn-down venue in Philadelphia where Donald Trump’s lawyer, Rudy Giuliani, launched the doomed effort to block Joe Biden’s win in the 2020 presidential election. The Giuliani group meant to book the Four Seasons hotel, but somebody goofed and Giuliani ended up spouting his familiar election lies in front of an industrial garage door plastered with Trump signs. The Trump effort to overturn the election never got any more professional than that.
POTUS・18 HOURS AGO

Biden promised no vaccine mandates; the Senate will vote to overturn his private employee mandate

The coronavirus vaccines developed under the Trump administration’s “Operation Warp Speed” are medical miracles, but the decision to get vaccinated should be a personal health choice. It shouldn’t be up to President Joe Biden. A year ago this week, Biden said of the COVID-19 vaccines ,...
U.S. POLITICS・2 HOURS AGO
MSNBC

House Republican sees 'grifters' among his own GOP colleagues

There was some unpleasantness among House Republicans last week, as two first-year GOP House members — Georgia's Marjorie Taylor Greene and South Carolina's Nancy Mace —feuded in ways that turned quite ugly. It wasn't long before other Republicans started taking sides, rallying behind their preferred colleague. For GOP...
CONGRESS & COURTS・2 HOURS AGO
Fox News

'The Five': Democrats flee Biden over fears of being 'smoked in the midterms'

Many congressional Democrats are increasingly fleeing the shadow of their party's leader, President Biden, while the United States continues to socioeconomically falter under his leadership amid anxiety over a possible 2010-like Republican wave in the quickly approaching 2022 midterms. The panel on "The Five" discussed how Biden's ineffective and unpopular...
PRESIDENTIAL ELECTION・16 HOURS AGO
Fox News

MSNBC contributor suggests ‘federal takeover’ of elections in Republican states: 'This is an emergency'

An MSNBC political contributor said Tuesday that the Biden administration should send the government to Republican states for a "federal takeover" of elections, arguing that such a drastic measure is supposed to be taken if it is determined a state is "violating people’s civil liberties." "This is an emergency,"...
PRESIDENTIAL ELECTION・2 HOURS AGO

In this daily series, Newsweek explores the steps that led to the January 6 Capitol Riot. On December 8, a week before the electoral college was scheduled to meet, one of Donald Trump's last avenues of appeal was shut off, as the U.S. Supreme Court declined to hear a claim challenging Pennsylvania's voting by mail.
CONGRESS & COURTS・6 HOURS AGO
Business Insider

Mark Meadows baselessly claimed in his memoir that Biden's 81 million votes in the 2020 election don't constitute "a real number." He parroted Trump's broad and unspecified claims that the election was rigged and stolen. Meadows repeatedly pressured state and national officials to investigate conspiracy theories after the election. Former...
PRESIDENTIAL ELECTION・19 HOURS AGO
Axios

President Joe Biden blasted a series of blistering "inappropriate personal attacks" by Republicans targeting his pick to serve as a top banking regulator, as he accepted her withdrawal Tuesday from consideration for the job. Soviet-born Cornell University law professor Saule Omarova had been nominated as comptroller of the currency, a role overseeing two thirds of the US banking system -- or some 1,200 institutions with a combined $14 trillion in assets. She pulled herself from consideration after her nomination was derailed by several Republican senators falsely implying she was a communist, as well as legitimate cross-party concerns about her past pronouncements on banking reform. "As a strong advocate for consumers and a staunch defender of the safety and soundness of our financial system, Saule would have brought invaluable insight and perspective to our important work on behalf of the American people," Biden said in a statement.
PRESIDENTIAL ELECTION・16 HOURS AGO

Saule Omarova, President Joe Biden's pick for comptroller of the currency, has withdrawn herself from consideration.
PRESIDENTIAL ELECTION・19 HOURS AGO
Business Insider

Biden lead Trump by one point, 46% to 45%, in a Wall Street Journal poll full of bad news for his agenda and Democrats' chances in 2022.
PRESIDENTIAL ELECTION・20 HOURS AGO
WashingtonExaminer

Leaders of the House and Senate Armed Services committees have reached an agreement on the stalled defense funding bill.
CONGRESS & COURTS・21 HOURS AGO
KRON4 News

More voters would back former President Donald Trump than President Joe Biden in a hypothetical match-up if the 2024 election were held today, according to a new Harvard CAPS-Harris Poll survey released exclusively to The Hill.
PRESIDENTIAL ELECTION・22 HOURS AGO

The House of Representatives passed a bill Tuesday night that contains a provision that will allow the Senate to pass a debt ceiling hike with only Democratic votes. In a vote of 222 to 212, the House passed a bill that delays Medicare sequestration cuts for three months, which had rules to increase the debt ceiling tucked inside.
CONGRESS & COURTS・16 HOURS AGO
Fox News

Rep. Alexandria Ocasio-Cortez and some fellow progressive lawmakers joined a group of protesters outside the U.S. Capitol Tuesday to demand that Senate Democratic leaders ignore their chamber's parliamentarian and include a path to citizenship for illegal immigrants in the reconciliation spending bill. "The Senate needs to step up, override the...
CONGRESS & COURTS・16 HOURS AGO
POLITICO

At issue was whether to punish the kingdom for its human rights abuses and its involvement in Yemen’s civil war.
FOREIGN POLICY・14 HOURS AGO
WashingtonExaminer