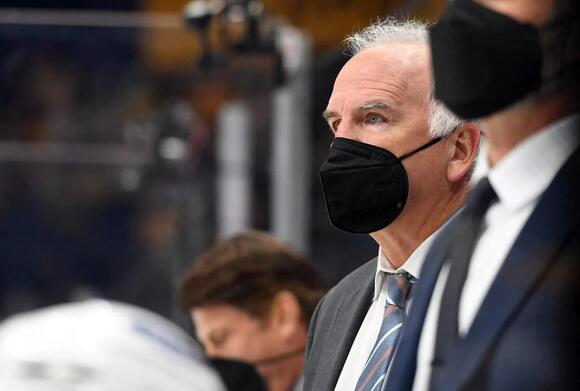 Florida Panthers coach Joel Quenneville will coach the Florida Panthers in their game against the visiting Boston Bruins on Wednesday night before heading to New York to meet with NHL commissioner Gary Bettman on Thursday.

Quenneville is under scrutiny for his reported role in the 2010 Chicago Blackhawks’ mishandled sexual assault allegations against former video coach Brad Aldrich.

The veteran NHL coach, who was Chicago’s head coach in 2010, claimed he only learned about allegations made against Aldrich last year. But that was contradicted by the findings of the independent investigation by law firm Jenner & Block, which reported that Quenneville was one of several lead figures in the room when allegations against Aldrich were discussed on May 23, 2010.

This occurred as the Blackhawks were making a run to the 2010 Stanley Cup Finals, and the investigation’s findings mentioned that Quenneville voiced his “desire to focus on the team and the playoffs” and was “angry and was concerned about upsetting team chemistry.” 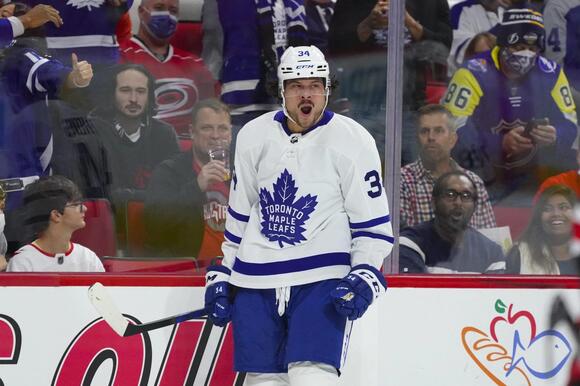 Blackhawks general manager Stan Bowman and senior vice president Al MacIsaac resigned this week amid the fallout of the investigation.

Quenneville told reporters Wednesday that he addressed the Panthers about his impending meeting with Bettman, adding, “I think we try to eliminate all distractions, and that was one of them.”

The Panthers have started the season 6-0-0.

Andrew Brunette said Thursday night that he has been concerned with the Florida Panthers power play throughout the season. So, the team struggling while with the man advantage this week is nothing really all that new. While the Panthers came into Thursday tied for 10th in the NHL in power...
NHL・14 DAYS AGO
USA TODAY Sports Media Group

The New York Islanders will meet the Florida Panthers in NHL action on Tuesday night from the FLA Live Arena. The Islanders come into this matchup trying to snap a three-game losing streak and they will have to do it on the road. As for the Panthers, they are also on a losing streak while losing their last four.
NHL・10 DAYS AGO
NESN

Quite the night in the NHL on Tuesday with some pretty substantive underdogs winning. The Buffalo Sabres and Arizona Coyotes cashed as +205 and +270 moneyline longshots and were two of six underdogs to win outright last night. It’s a quiet Wednesday in the NHL, with only three games on the docket, all of which start at 9 pm ET or later. We’ll be burning the midnight oil to enjoy tonight’s slate.
NHL・9 DAYS AGO
floridahockeynow.com

On Saturday, in what would end up being a 3-2 overtime loss to the host Lightning, the Florida Panthers debuted three new set of lines midway through the second period. The mixing-and-matching ultimately paid off, with two goals coming in a 36-second span shortly after the new combinations were put together.
NHL・12 DAYS AGO

After being utilized sparingly in his first NHL season before being sent back to the juniors in 2017, Owen Tippett is hitting his stride after establishing a role on the Florida Panthers over the past two seasons. “I think it’s just kind of knowing how to play now,” Tippett said....
NHL・10 DAYS AGO
numberfire.com

We will be settling in for an 11-game slate on Thursday night after tolerating a modest three-game schedule last night. Two of the three favorites won last night, but there are a few live dogs from our projections. We're highlighting a pair of home teams, one favorite and one underdog, in today's NHL Betting Guide.
NHL・8 DAYS AGO
nbcsportsedge.com

The App is Back! Don’t forget to download the NBC Sports EDGE app to receive real-time player news, mobile alerts and track your favorite players. Plus, now you can check out articles and player cards. Get it here!. NHL Plays will highlight the best and the most underrated daily fantasy...
TECHNOLOGY・10 DAYS AGO
Yardbarker

The New Jersey Devils are in the Sunshine State preparing to take on the Florida Panthers on Thursday. Yesterday, the team placed Tyce Thompson on injured reserve and recalled Fabian Zetterlund from the Utica Comets, so expect Zetterlund to make his NHL debut during this Florida trip. “The reason you...
NHL・8 DAYS AGO

NHL On Tap: Panthers try to stay perfect at home

Islanders to open new arena against Flames; McDavid, Kane surging entering Oilers-Blackhawks game. Welcome to the NHL On Tap. Three NHL.com writers will share what they are most looking forward to on the schedule each day. Today, their choices from the 12 games Saturday. Panthers look to stay perfect at...
NHL・6 DAYS AGO
The Hockey Writers

In today’s NHL rumors rundown, it’s not Bruins or bust for goaltender Tuukka Rask. Does that mean a team like the Edmonton Oilers would have a shot at the netminder? Are the Florida Panthers going to look at trying to replace Aleksander Barkov’s production after he went down with an injury? Vancouver Canucks’ general manager Jim Benning spoke about the team’s struggles and offered some little clarification as to whether or not Travis Green’s job as head coach was safe. Finally, who could be moved out of Montreal? Are both Ben Chiarot and Brendan Gallagher possible assets on the trade market?
NHL・7 DAYS AGO
The Spun

Cam Newton Had Message For Panthers Fans On Thursday

It’s only been a week since Cam Newton returned to the Carolina Panthers, but he’s already making a difference for the franchise. During this Thursday’s press conference, Newton announced that he’s teaming up with his production company and organizations in the Charlotte area to find fans who haven’t been to a Panthers game before. He plans on giving those fans tickets to this Sunday’s game against the Washington Football Team.
NFL・8 DAYS AGO

Frank Vatrano was involved in each of the Florida Panthers’ first three goals — scoring twice and chipping in an assist — and Sergei Bobrovsky was dominant in net once again as the Panthers beat the Minnesota Wild 5-4 on Saturday at FLA Live Arena to remain undefeated at home.
NHL・6 DAYS AGO
ESPN

Florida International football coach Butch Davis will not return in 2022. Davis, who has led FIU since 2017, told The Action Network that he's out after the season and criticized the school's administration for "sabotaging the program." He has informed the coaching staff that he will not be back, sources...
NFL・11 DAYS AGO
The Hockey Writers

This edition of the NHL Stat Corner covers the busy weekend of hockey. Teams like the Calgary Flames, Toronto Maple Leafs, and Washington Capitals were very busy. There is a lot to talk about with those three teams doing very well, plus we look at the Edmonton Oilers and Florida Panthers continuing their home success and dominance. All that, plus much more from around the NHL is on tap.
NHL・4 DAYS AGO
Sportico

On the latest Sporticast episode, hosts Scott Soshnick and Eben Novy-Williams speak with Jake Reynolds, president of the New Jersey Devils, about the business of the NHL, and how the franchise fits into its parent company’s larger portfolio. The Devils are owned by Harris Blitzer Sports & Entertainment, also the parent of the NBA’s Philadelphia 76ers, the Prudential Center and a handful of other sports, entertainment and real estate assets. It’s considered by many to be the ownership model of the future, and Reynolds discusses the advantages of being part of the larger company. The trio also talks about how hospitality and...
NHL・1 DAY AGO
Sportsnet.ca

The Winnipeg Jets will be looking to snap a three-game losing streak when they visit the Columbus Blue Jackets on Wednesday night as -130 road favourites on the NHL odds at sportsbooks monitored by OddsShark.com. Winnipeg had its recent offensive woes extended with Monday's 3-1 loss to the visiting Pittsburgh...
NHL・3 DAYS AGO
CBS DFW

DALLAS (CBSDFW.COM) — The Dallas Stars took on two opponents Tuesday night at the American Airlines Center. One the ice, they faced off against the Edmonton Oilers. But they also took on something that has touched many families, including ours here at CBS 11. It was Hockey Fights Cancer Night for the Stars and the rest of the NHL. Our friend, and former colleague, Dallas Cowboys radio analyst Babe Laufenberg dropped the puck in honor of his son, Luke, who passed away in 2019 after a tough battle with Leukemia. “I’m excited to do it, excited to do it in Luke’s name and Luke’s honor,” Laufenberg explained. “Quite honestly, I will be dropping the puck for not only Luke tonight, but every kid out there battling cancer, and every family battling cancer with their child.” Money raised through the Hockey Fights Cancer initiative goes to the American Cancer Society. The Stars beat the Oilers 4-1.
NHL・2 DAYS AGO
cbslocal.com

MIAMI (CBSMiami) – The Florida Panthers can put themselves in the NHL record books Wednesday, as the team is already one of only four teams in league history to win their first 10 home games starting a season. The Panthers can tie the league record of 11 consecutive wins set...
NHL・2 DAYS AGO
Sportsnaut

Alex DeBrincat scored with 3:33 remaining in overtime as the Chicago Blackhawks rallied to defeat the visiting St. Louis Blues
NHL・6 HOURS AGO