HHW Gaming: The Best Video Games of 2021…So Far 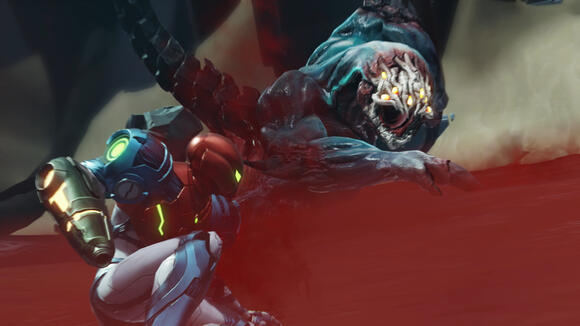 2021 is the first full year for next-gen consoles, but was it a good year for video games? So far, yeah, it’s been pretty solid.

While 2021 still has a couple of months to go, it is quickly wrapping up, and so far, it’s been a strong year for gaming. Gamers who have been fortunate enough to get their hands on either a PS5, Xbox Series S|X, or a Nintendo Switch OLED are currently enjoying some great video games.

With titles like Call of Duty: Vanguard , Battlefield 2042 , Guardians of the Galaxy , and, of course, the highly-anticipated Halo: Infinite still in the pipeline, we decided to focus on the games that are currently getting gamers to pick up the sticks daily. Featured are some beloved video games franchises that always deliver as well as some notable newcomers.

So hit the power button and dive into our favorite games of 2021, so far, in the gallery below.

NBA 2K , the annual basketball video game franchise has fallen off a bit, but its latest entry, NBA 2K22 , shows the franchise returning to championship form thanks to some much-needed gameplay improvements. Thanks to next-gen technology, NBA 2K22 feels and plays even better, and with The City, competing against friends while leveling up your MyPlayer is more fun than ever.

The latest installment in Ubisoft’s Far Cry video game franchise, Far Cry 6, is here, and it’s a liberating good time that features the over-the-top action fans have come to know and love. With fantastic gameplay mechanics, new gameplay features, and an engaging story featuring one of the best video game villains ever played by the exceptional Giancarlo Esposito, Far Cry 6 is definitely one of the best games of 2021.

Nintendo fans have long been waiting for a new adventure featuring the legendary bounty hunter Samus Aran and delivered with Metroid Dread . The latest installment in the iconic Metroid video game franchise brings back everything fans loved about the game series with a fresh take that is currently one of the reasons Nintendo Switch OLED models are so hard to find.

2021 saw “roguelike” games take center stage. Housemarque, now officially part of PlayStation Studios, came through and shook the table with Returnal. It’s a gripping sci-fi/action-adventure game that is both fun and painstakingly challenging that will have you screaming at your televisions because you will die A LOT.  But don’t let that deter you from picking this game up, especially if you appreciate a good challenge. We promise, once you do complete missions, it’s enriching.

Insomniac Games is batting 1.000 and is the best studio PlayStation owns right now, thanks to games like Ratchet & Clank: Rift Apart . The platform adventure sees the return of everyone’s favorite Lombax and his robot companion that takes them on a new adventure that not only spans the universe but crosses dimensions. Rift Apart also introduces a new playable character, a female Lombax named Rivet, quickly becoming a fan favorite.

Ratchet & Clank: Rift Apart masterfully showcases the true power of the PS5, and many believe it is a strong candidate for Game of the Year honors. We respectfully agree.

If you’re like us and enjoyed playing games like the Legend of Zelda: Ocarina of Time , Majora’s Mask , or Twighlight Princess , then Kena: Bridge of Spirits is the perfect game for you. Developed by Ember Lab, a Black-owned gaming studio, the game is one of those pleasant surprises even though it’s not your typical AAA title. It features a perfect blend of action, adventure, and puzzle-solving and an engaging story that will surely keep you captivated during your 9 hours of play.

Gamers should definitely pick this game up for either their PS5, PS4, or PC.

Deathloop is another “roguelike” game, but this one is a riveting first-person shooter adventure that has you constantly reliving the day to help you take out targets to stop the continuous loop you’re character is stuck in. On top of that, a rival assassin is making that mission hard by hunting you and taking you out, causing you to start that day all over again.

Resident Evil: Village picks right up after the events of Resident Evil VII: Biohazard utilizing the first-person style of play that to deliver the scares that fans of the franchise have become used to. In Resident Evil: Village players once again take control of Ethan Winters who must take on a new set of supernatural baddies to save his wife and child who were kidnapped and taken to a mysterious village that is controlled by an insanely tall vampire-like woman and her offspring who have a taste for blood.

With Black Friday right around the corner, it's almost time for the annual avalanche of gaming deals. If you're an Xbox fan, we've rounded up the best Xbox Series X and Xbox One Black Friday deals. As always, there will be a plethora of deals on games--both first- and third-party--during Black Friday. You can also expect nice discounts on accessories like controllers and headsets. We expect the best bargain will be Xbox Game Pass Ultimate subscriptions (already a bargain at full price), which are typically on sale for steep discounts during Black Friday weekend. And if you're still looking for an Xbox Series X or Series S, major retailers will have the consoles in stock starting next week.
MLB・14 DAYS AGO
HipHopWired

Pick One: Which Is Your Favourite Forza Horizon Game So Far?

It's time for another round of Pick One! This week, considering that Forza Horizon 5 has been available with Xbox Game Pass for a little while now, we're interested to know your favourite Forza Horizon game so far. The series began all the way back in 2012 with the first...
VIDEO GAMES・11 DAYS AGO

Black Friday always brings steep discounts on PCs and peripherals, including gaming monitors. Whether you game on PC or are looking for a nice monitor for your PS5 or Xbox Series X|S, now's a great time to look into replacing your old monitor with a shiny new one. Though Black Friday is still technically over a week away, there are already some wonderful deals on gaming monitors from popular brands, including Samsung, Asus, and Alienware. We've rounded up the best Black Friday gaming monitor deals so far and will add to this list as new deals pop up.
ELECTRONICS・14 DAYS AGO
culturedvultures.com

2021. It has been what some call “a year”. To celebrate this collection of sun rotations, we’re looking at the best games of 2021. Next up: Nier Replicant. 2021 was a year full of exciting releases, but not necessarily any clear GOTY slam dunks. The lack of a clear list-topper like last year’s Animal Crossing or Hades means that determining the game of the year this year is much more open-ended. In thinking about what made a game from 2021 a game of the year, I found the remake of the 2010 PS3 action RPG Nier to be a contender for one simple reason: of all the video games I played this year, Nier Replicant is by far the most video gamey video game.
VIDEO GAMES・9 DAYS AGO
GamesRadar+

With Black Friday Xbox Series X deals starting to appear, you'll want to keep an eye on bulking up your library by grabbing some titles from this Black Friday Xbox game sale, which has discounts of up to 90% on some of this year's biggest games, including Far Cry 6, Back 4 Blood, and Resident Evil Village.
FIFA・7 DAYS AGO
USA TODAY

With so many games releasing, it's hard to keep up with the best of them. As time goes on, great games get buried by new titles, making you miss out on some of the best experiences gaming has to offer. For Black Friday, ZDNet has rounded up 15 amazing gaming deals for some of the best titles in the last few years.
VIDEO GAMES・4 DAYS AGO
game-debate.com

What are the best sites for cheap video game deals this Black Friday 2021?

As Black Friday officially begins (well, the holiday name at least, not that it means anything when it actually lasts a week these days), many retailers can offer some great deals on PC hardware and video games. But with so many options to choose from, what are the best sites for cheap video game deals this Black Friday 2021?
VIDEO GAMES・5 DAYS AGO
Game Informer Online

Like Thanksgiving dinner’s main attraction, Destiny 2 is reliable and familiar. Sure, it can be a bit bland at times; you know exactly what you’re getting with a few surprises. But there’s no denying that it feels great to experience, plus that fun often lasts days after you’ve initially dug into it. Unfortunately, if you take too long to come back for seconds, you may discover that all the good parts are suddenly missing.
VIDEO GAMES・6 DAYS AGO
thenerdstash.com

Why Video Game Adaptations Are So Consistently Inadequate

Like a handful of you reading this article, I recently watched Netflix and Riot Games’ collaborative project Arcane. For those unaware, Arcane tells an original story, focusing on two of League of Legends’ champions, Vi and Jinx. Oh, and there’s a handful of others such as Caitlyn, Jayce, Viktor, and more. My expectations were that of cautious optimism, as so many video game adaptations like it fail to satisfy the tight rope of new and veteran fans of the source material. And yet, after watching the first act, I was immediately enthralled by its world and characters. Its ability to exist in a rich, pre-established world, while fleshing it out with strong and meaningful characters across the board, quickly made it one of my favorite shows I’ve seen in a while. Looking anywhere online tells you quickly that I’m not the only one.
VIDEO GAMES・5 DAYS AGO

In ‘Wildermyth,’ I played one of the best video game narratives of the year

Nallera’s intentions, at least, were good. It’s all that other messy stuff — life, decisions, consequences — that got her in the end. Tasked with helping to save humanity from a bio-robotic menace known as the Morthagi, she was faced with a choice: destroy an ancient blade that emanated evil or hold onto it and try to harness its power for good. Dangling it over the flames of an equally ancient furnace, she had two visions: one of the blade’s destruction, which foretold a future in which Nallera was old and gray, still fighting the war that’d already devoured a decade of her life, and another in which the war was won, and she and her friends were still young, free of scars and strife. As her partner, a cheerful ranger named Rowsin, gazed on, Nallera yanked the blade back from the flames. After that day, nothing was the same.
VIDEO GAMES・1 DAY AGO
The Independent

Black Friday is the shopping event everyone’s been waiting for, and we’re now on the third day of deal-hunting. The four-day bonanza includes deals and discounts across a huge range of products, from technology and home appliances to TVs, beauty, homewares, toys and much more.Consoles, games, subscriptions and accessories are hugely popular this year, and while we expect interest in Xbox and Playstation to remain high, the Nintendo Switch is also a highlight – especially with the new Nintendo Switch OLED having landed in the UK on 8 October.Follow live: The best Black Friday deals still available nowGaming deals will be available far and wide across...
VIDEO GAMES・2 DAYS AGO
Rolling Stone

The Nintendo Switch Has Been Sold Out for Months, But It’s In Stock for Cyber Monday

David Hernandez is planning on releasing his game that pays players for every hour they play.
VIDEO GAMES・17 HOURS AGO