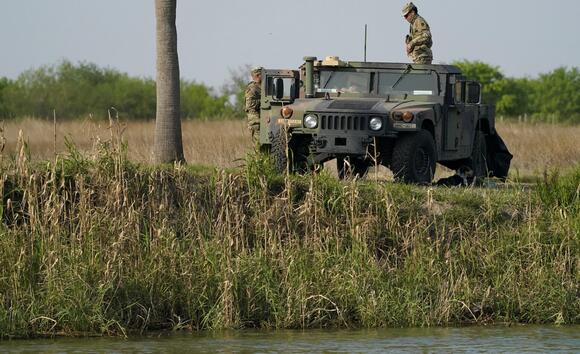 AUSTIN, Texas — National Guard members deployed in Texas by Gov. Greg Abbott have arrested more than 32,000 people on state trespassing and human smuggling charges as part of a highly unusual operation that has turned soldiers into law enforcement officers, the Washington Examiner has learned.

Most of those arrested are noncitizens who illegally crossed the international border from Mexico into Texas and, in doing so, trespassed onto private land, according to a spokeswoman for the Texas Military Department. The arrests began in July and the numbers go through late October.

The military department has sent “thousands” of National Guard members to the border and has "thousands more coming,” the spokeswoman said, one indication that migrant and smuggler arrests are expected to rise further in the coming months.

Under normal circumstances, members of the military are not allowed to make arrests or enforce laws. Until July, any state military forces sent to the border assisted Border Patrol, state police, and local law enforcement in ways that did not cause them to interact with migrants. They manned surveillance cameras and watched the border, among other tasks.

The Posse Comitatus Act forbids federal military like the U.S. Army from enforcing civilian law without the approval of Congress, explained Lora Ries, senior research fellow on homeland security at the Heritage Foundation, a conservative think tank in Washington. Texas found an exception by sending in its own National Guard.

“Up into this point, when the president has sent down the Guard, it's been a supporting role,” said Ries. “This is a state commander telling state Guard to enforce state laws. And when these people cross the border and set foot in Texas, they're breaking state laws. And so the state Guard then can arrest for state crimes.”

The Republican governor in March created a statewide initiative known as Operation Lone Star in which state troopers from DPS would be sent to the border to help arrest trespassers while Border Patrol agents are pulled from the field to transport and process people in custody.

In a letter sent on July 27, Abbott ordered TMD Major General Tracy Norris to take new action. Abbott cited Article IV, Section 7 of the Texas Constitution’s authority for the governor to "call forth the militia to execute the laws of the State” and instructed Norris to do so.

Those arrested by the military would be transferred to law enforcement to be booked into the system. Texas Department of Public Safety Director Steven McCraw acknowledged that the military doing police work was unusual.

“Nobody’s ever really used the Guard before in this capacity,” McCraw said in an interview with Todd Bensman, a fellow for the Center for Immigration Studies, a right-leaning research group in Washington.

The Guard members were required to complete 40 hours of training on the Fourth Amendment and the use of force since they are authorized to use their weapons.

State officials would not provide additional information about the border operation, though Bensman wrote in a recent report for CIS that the state is only arresting men. Women, children, and families are turned over to the Border Patrol. More than 140 landowners have agreed to let the state erect fencing on their land and to "become complainants in misdemeanor-level criminal trespassing cases that DPS officers will charge (and have been charging since July)."

It is not clear what the state is doing with the tens of thousands of migrants apprehended for illegally crossing the border since just 1,300 have been charged with trespassing to date, according to Bensman's report.

Between the unprecedented military arrests and arrests by state police, Texas authorities have taken into custody more than 80,000 this year, the governor's office and TMD told the Washington Examiner.

Of the 80,000 figure, 73,000 were apprehended by soldiers and troopers for trespassing as illegal immigrants. More than 7,000 others were arrested on allegations of committing a state crime, such as human or drug smuggling, according to Abbott spokeswoman Renae Eze.

No offense but we need to start charging the country of origin for these people not following our immigration procedures. Stop sending foreign aid. Bring back our businesses. Cut taxes. Help the homeless first. Get the criminals off the street and the ones who can—put them in a work release program. Give them healthy goals. As for those outside of the country who need help, sorry, ask your government for any of the funding we already sent.

Biden and Harris are encouraging illegals yo come over promising citizenship and money. Someone has to do something. Thanks to these great people to help salvage our country.

AUSTIN, Texas — Two men were arrested and charged with manslaughter after an immigrant was killed and another injured when they were shot at while drinking water on the side of a road near a Texas border town.
SIERRA BLANCA, TX・2 DAYS AGO
WashingtonExaminer

As Hurricane Ian rages on in Florida, its wildlife is being transported with it.
FLORIDA STATE・2 DAYS AGO
WashingtonExaminer

Heiress billionaire and mother of two Eliza Fletcher, who was kidnapped during an early morning run, died from a gunshot wound to the head, according to the recently released autopsy report.
MEMPHIS, TN・2 DAYS AGO
WashingtonExaminer

Stimulus update: Direct one-time payments worth $1,050 will start going out next month in California

Eligible California residents are set to get state-issued direct payments of up to $1,050 as part of efforts to combat continued inflation and the rising costs of nearly all products.
CALIFORNIA STATE・2 DAYS AGO

Stimulus update: $850 check must be claimed by the end of this month

Maine residents may be eligible to receive up to $850 in COVID-19 relief thanks to a surplus in the state’s budget, offering some financial assistance to address pandemic and inflation-induced economic strains.
MAINE STATE・1 DAY AGO
WashingtonExaminer

While the presidential transition from Donald Trump to Joe Biden was seemingly chaotic from the public's standpoint, things inside the walls of the White House were equally hectic as Trump aides sought to create headaches for their successors, according to a new book. At one point during the final days...
POTUS・1 DAY AGO
WashingtonExaminer

As Hurricane Ian continues its path of destruction, one of the hardest-hit areas was Sanibel Island in Lee County, Florida.
LEE COUNTY, FL・2 DAYS AGO
WashingtonExaminer

Low-income residents in New Mexico can apply to receive a fourth round of economic stimulus checks worth at least $400, with the deadline to submit an application on Oct. 7.
ILLINOIS STATE・2 DAYS AGO

An 11-year-old boy in Florida died after he fell from a Panama City Beach resort balcony while his family was waiting out Hurricane Ian, authorities said.
PANAMA CITY BEACH, FL・2 DAYS AGO
WashingtonExaminer

Turned on Trump: Here are the Republicans backing Democrats over MAGA candidates

Despite not appearing on the November ballot, former President Donald Trump has played a major role in the midterm elections by endorsing a slew of Republican candidates. But a number of high-profile Republicans in battleground states have placed their support behind the Democratic candidates opposing some of those Trump-endorsed nominees. It’s not clear what effect, if any, the conflicting endorsements will have, but it does show how the Republican Party has fractured, to some extent, over whether to continue embracing the former president.
ARIZONA STATE・1 DAY AGO
WashingtonExaminer

Recipients of Supplemental Security Income are set to receive the second half of their payments this month, totaling the money given to them for September to $1,682.
CALIFORNIA STATE・2 DAYS AGO

Two days after Hurricane Ian made landfall and pummeled Florida, the devastation of the storm is becoming more evident.
FLORIDA STATE・2 DAYS AGO
WashingtonExaminer

WATCH: Bill Clinton admits ‘there is a limit’ to how many immigrants the US can take

At least five people were killed in a Thursday morning shooting in McGregor, Texas, according to police.
MCGREGOR, TX・2 DAYS AGO
WashingtonExaminer

Claims by Rep. Adam Schiff (D-CA) that he had no contact with the intelligence community whistleblower at the center of the first impeachment of then-President Donald Trump are disputed in a new book.
POTUS・2 DAYS AGO
WashingtonExaminer

The White House is preparing for turnover among senior-level staff after the November elections, looking to shuffle personnel into position as Democrats eye a path to 2024.
BUSINESS・2 DAYS AGO
WashingtonExaminer

Members of the Jan. 6 committee appear lukewarm about whether Virginia "Ginni" Thomas played a significant role in efforts to overturn the 2020 election.
VIRGINIA STATE・1 DAY AGO