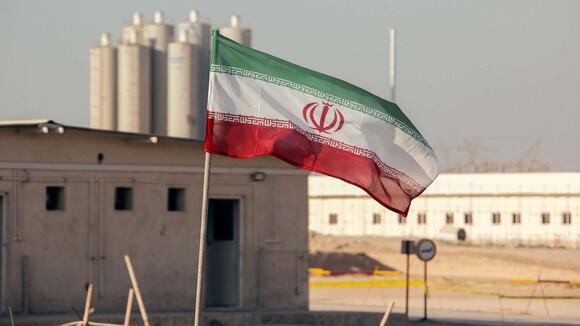 Iran has agreed to restart negotiations over its nuclear program next month, its chief negotiator said Wednesday.

Those talks, in which Iran and the U.S. have engaged through intermediaries, come as the Obama-era nuclear deal hangs by a thread and amid warnings about Iran's nuclear advances since Iran halted talks in June.

It's unclear whether an agreement has been reached to resume talks, when they would begin and whether Iran still has preconditions like sanctions relief. Iran's top negotiator, deputy foreign minister Ali Bagheri Kani, said the "exact date will be announced next week."

MORE: US implores Iran to return to nuke talks without delay

A State Department spokesperson told ABC News the administration had "seen the reports but do not have any further details about a possible return to Vienna talks in November."

Iran had halted those talks in the Austrian capital right before its presidential election in June, saying for months now that the new administration of hardliner Ebrahim Raisi needed time to transition and formulate his team.

But during that halt, Iran has advanced its nuclear program -- expanding its stockpile of enriched uranium, enriching uranium to higher levels, spinning more centrifuges and more advanced ones -- alarming U.S. officials.

It has also obstructed the work of the U.N. nuclear watchdog, the International Atomic Energy Agency, or IAEA, whose chief said last week its monitoring ability is "no longer intact."

MORE: US to 'keep our eye on the ball' in nuclear talks after Iran election: Sullivan

The Biden administration has increasingly warned that while the door is still open to diplomacy, time is running out before restoring the deal would be pointless because of how advanced Iran's nuclear program had become.

"This window will not remain open forever as Iran continues to take provocative nuclear steps, so we hope that they come to Vienna to negotiate quickly and in good faith," the State Department spokesperson said Wednesday in a statement.

To critics, that window should have already been closed, while many analysts warned that Iran is still stalling, even as it talks about resuming negotiations.

"If they continue to stall while advancing their nuclear program, there may come a time when the U.S. or Israel turn to 'plan B'," tweeted Nicholas Miller, a Dartmouth College professor who researches nuclear proliferation.

The top U.S. negotiator, special envoy for Iran Rob Malley, said Monday there's "shared impatience" with Iran among the U.S. and other negotiating parties -- Russia, China, France, Germany, the United Kingdom and the European Union, which coordinated the previous six rounds of talks.

"Time is not on our side. The JCPOA cannot survive forever," Malley added, using an acronym for the nuclear deal's formal name.

But there's still a "strong preference for diplomacy, for an effort to revive the JCPOA," he said, and said there's "willingness" and "determination" from the Biden administration to make it happen.

On Wednesday, Bagheri met with Enrique Mora, a senior European Union diplomat who had been facilitating the talks. After their "serious and constructive conversation," Bagheri tweeted, Iran "agreed to start negotiations by the end of November."

But his boss, Iranian Foreign Minister Hossein Amir Abdollahian, also said Wednesday that while Iran would restart talks, it would not resume them with what had been agreed upon by June -- jettisoning months of previous negotiations. He also called on the U.S. to release $10 billion of Iranian funds frozen by U.S. sanctions to build confidence ahead of any agreement.

That's a sign of how far apart the new U.S. and Iranian governments are. Even if the parties convene again in Vienna, it will be a long road ahead to revive the deal.

As Abdollahian reiterated, Iran has demanded that the U.S. lift sanctions first, since it was former President Donald Trump who first violated the deal by exiting and reimposing sanctions. But President Joe Biden has committed to not lifting any sanctions until Iran returns to compliance -- what his administration calls a "mutual return" to the deal -- amid continued domestic criticism of the orginial agreement in Washington.

In the meantime, as Iranian centrifuges continue to spin, Iran hawks in the U.S. and Israel warn that it's too late for diplomacy and that other options, including a possible military strike, must be considered.

Secretary of State Antony Blinken has not engaged questions about a strike but told reporters two weeks ago the Biden administration was considering "every option to deal with the challenge posed by Iran."

"We, of course, retain all other options to be able to deal with this program as necessary," National Security Advisor Jake Sullivan said Tuesday. "But beyond that, I'm not going to comment further because we believe there still is an opportunity to resolve this diplomatically."

Agents from Israel’s spy agency Mossad recruited Iranian scientists to sabotage the nuclear facility where they were employed by smuggling in explosives disguised as boxes of food, it has been reported. The explosion at the Natanz nuclear facility in April completely destroyed the plant’s independent internal power system, which powered...
INDUSTRY・10 HOURS AGO
Newsweek

The Kremlin said the move is a response to a U.S. announcement that 27 Russian diplomats and their families would have to leave by January 30.
POLITICS・1 DAY AGO
Reuters

Quds force chief says U.S."teeth will be crushed" if it moves against Iran

VIENNA, Dec 2 (Reuters) - The commander of Iran's elite Quds Force on Thursday warned the United States its "teeth will be crushed" if Washington makes the slightest move against Tehran, state media said, as indirect talks are being held to rescue a 2015 nuclear accord. "This nation's power and...
WORLD・18 HOURS AGO
Washington Examiner

Russia is demanding that the United States agree to "legal guarantees" not to expand NATO and not to deploy intermediate-range ballistic missiles in Europe. Absent that, Vladimir Putin implies that war may follow. Putin is now demanding "agreements that exclude any further NATO moves to the east and the deployment...
POLITICS・9 HOURS AGO

The US says it has evidence Russia has made plans for a “large scale” attack on Ukraine and that Nato allies are “prepared to impose severe costs” on Moscow if it attempts an invasion. Speaking at a Nato ministers meeting in Latvia, the US secretary of state, Antony Blinken, said...
POLITICS・1 DAY AGO
The Independent

The UK’s foreign secretary Liz Truss has warned Russian president Vladimir Putin against making a “strategic mistake” by launching an invasion of Ukraine.The senior minister accused Moscow of “malign activity” in the Balkans, as Nato allies gathered in Latvia to consider how to respond to Russia’s military build-up near the Ukrainian border.Suggesting the Kremlin was stirring up tensions, Ms Truss said: “We will support Ukraine and stability in the western Balkans … we will stand with our fellow democracies against Russia’s malign activity.”The foreign secretary also warned: “Any action by Russia to undermine the freedom and democracy that our partners enjoy...
POLITICS・2 DAYS AGO
The Independent

The president of Belarus has suggested his nation will take advantage of access it has to nuclear weapons via its Russian ally, should Nato decide to arm parts of Europe with similar machinery.It comes amid increasing tensions between Alexander Lukashenko and the EU over the current migrant crisis on the border shared by Belarus and Poland. Less than two weeks ago, Jens Stoltenberg, Nato’s secretary-general, announced in a statement that US nuclear weapons currently stationed inside Germany could well be moved to “other European countries” dependant on a decision about which territories leaders want them to sit in.“It is...
POLITICS・2 DAYS AGO
Newsweek

US warns Russia as Kremlin talks about war threat in Ukraine

MOSCOW (AP) — The Kremlin voiced concern Thursday about a possible escalation of fighting in a separatist conflict in eastern Ukraine as the U.S. issued a strong warning to Russia to stay away from Ukraine. Ukrainian and Western officials have worried about a Russian troop buildup near Ukraine, fearing it could herald an invasion. But […]
POLITICS・12 HOURS AGO
abc27 News

Iran said on Thursday it had handed European powers two draft proposals to try to revive a 2015 nuclear deal, as the Europeans and US said time is of the essence. Earlier, Iran's foreign minister tweeted that an agreement to revive the nuclear deal with world powers was "within reach".
MIDDLE EAST・12 HOURS AGO
The Associated Press

The US military will reinforce deployments and bases directed at China and Russia, while maintaining forces in the Middle East adequate to deter Iran and jihadist groups, the Pentagon said Monday, referencing results of a review. Global responsibilities "require us to make continuous changes to our Middle East posture, but we always have the capability to rapidly deploy forces to the region based on the threat environment," Karlin said.
FOREIGN POLICY・2 DAYS AGO
New York Post

Russian President Vladimir Putin warned NATO and the US Tuesday that any deployment of troops or missiles in Ukraine would cross a “red line” and prompt a military response. “The emergence of such threats represents a ‘red line’ for us,” the Russian leader said. “I hope that it will not...
POLITICS・2 DAYS AGO
Newsweek

Russian President Vladimir Putin and Prime Minister Mikhail Mishustin touted common "principles" between their nation and China when it comes to global affairs.
POLITICS・2 DAYS AGO
The Guardian

Vladimir Putin has warned Nato countries that deploying weapons or soldiers to Ukraine would cross a “red line” for Russia and trigger a strong response, including a potential deployment of Russian missiles targeting Europe. Nato countries have warned Putin against further aggression against Ukraine as foreign ministers gathered in Latvia...
POLITICS・2 DAYS AGO

Blinken says Russia could move on Ukraine 'on short order'

U.S. Secretary of State Antony Blinken warned Wednesday that President Vladimir Putin could quickly order an invasion of Ukraine if he had a pretext for doing so but that NATO allies stand ready to inflict heavy sanctions on Russia’s economy if that happens.Tensions over a Russian troop buildup along the border of Ukraine have been a focus of Blinken’s weeklong Europe trip and topped the agenda of his meeting Wednesday with NATO counterparts in Latvia. The Ukrainian government is seeking to align with NATO and the West. “We don’t know whether President Putin has made the decision to invade....
U.S. POLITICS・1 DAY AGO
Reuters

Putin hits back as NATO warns Moscow against attacking Ukraine

RIGA/MOSCOW, Nov 30 (Reuters) - Russia would pay a high price for any new military aggression against Ukraine, NATO and the United States warned on Tuesday as the Western military alliance met to discuss Moscow's possible motives for massing troops near the Ukrainian border. President Vladimir Putin countered that Russia...
POLITICS・2 DAYS AGO
AFP

EU diplomats agreed Wednesday to add 28 individuals and bodies to its Belarus sanctions list in response to the alleged channelling of migrants to the bloc's borders. Brussels accuses strongman Alexander Lukashenko's regime of mounting a "hybrid attack" against EU soil by luring thousands of Middle Eastern migrants to the Polish and Lithuanian borders. Member states had already decided to slap sanctions on several Belarus targets, and on Wednesday senior envoys approved a list drawn up by the European Commission, diplomats said. According to one of the officials, the new targets include 17 officials and 11 companies or official bodies. EU ministers are expected to formally ratify the decision on Thursday.
POLITICS・1 DAY AGO
KOLR10 News

MOSCOW (AP) — President Vladimir Putin said Wednesday that Moscow would seek Western guarantees precluding any further NATO expansion and deployment of its weapons near his country’s borders, a stern demand that comes amid fears of a Russian invasion of Ukraine. Ukrainian and Western officials have worried about a Russian troop buildup near Ukraine, saying […]
POLITICS・1 DAY AGO