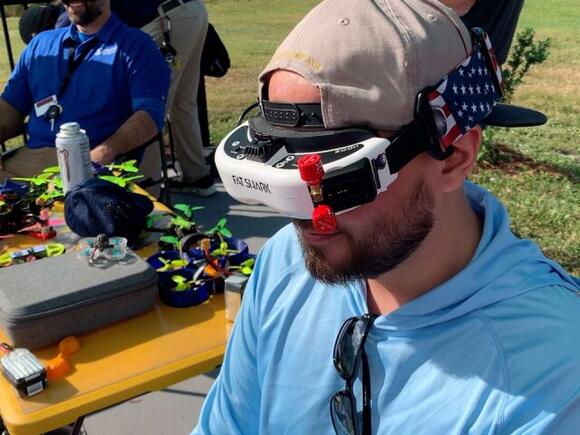 Putting on special goggles, you can see what it looks like flying a drone through the obstacles at Mango Park.

Some of the racing drones that can be flown can reach speeds of more than 100 miles an hour.

“If you hit this one. Your drone is definitely broken. You’ve got to fix again,” said Tilly Koester.

Members of the Cigar City Multirotors club said they are happy to finally have a place to fly and race where they won’t be chased away.

“The best part is having a dedicated space where we are not just tolerated but we are encouraged to come out and show off our drones show off what we do,” said Koester.

There are more than 896,000 drones registered in the U.S. by the FAA. And thousands more that aren’t registered.

It’s not always easy to find a place to fly, which is why at Mango Park in Seffner Hillsborough County officials created the first dedicated drone park in Tampa Bay. And one of just three in Florida.

“We feel safe that we can fly here. It’s intended for us to be here,” said Dederichs.

“Seeing the drone flyers is absolutely amazing. The skill and the technique. The ability to make something move so fast and so effortlessly. And I haven’t seen anyone crash yet,” said Jason Mackenzie, Hillsborough County Park Planner and Development Manager.

Members of the club said it’s a great hobby for those who like to tinker with mechanical things.

They also said they like meeting others who love to fly and teaching those who want to learn. They describe it as a real-life video game.

“The adrenaline that’s what gets me the most right there. Just taking the helmet and my hands are shaking from it still,” said Dederichs.

The park is located at 11717 Clay Pit Road in Seffner.

‘It was crazy violent’: Drones too close to aircraft spark concerns in Tampa Bay

Concerns over drones flying in unauthorized airspace and crashing into airliners continues to grow. Experts believe it's not a question of if it will happen - but how bad will it be.
13 DAYS AGO
995qyk.com

An experience with frontline workers inspired a local photographer. That inspiration sparked a showcase giving thanks to everyday Tampa Bay heroes. You might remember photographer Kamran Malik. We previously posted his photos from a fun project he did a few months ago. Recently Karim’s mother passed out and fell. The experience and interaction he had with frontline workers during this incident inspired him. Karim “wanted to showcase some of our everyday heroes who do wonderful work in our community on a daily basis and you never know what all they do, until you need some of their service in an emergency.”
TAMPA, FL・14 DAYS AGO
mmasucka.com

The most successful year in BKFC history continues to roll on as they have announced their next event will take place in Tampa, Florida. The promotion announced this week that BKFC Fight Night: Tampa will take place on a rare Thursday, specifically on December 9th at Seminole Hard Rock Hotel & Casino Tampa.
12 DAYS AGO
fox13news.com

One of Lake Wales' favorite sons has been chosen to compete in the Special Olympics. Joseph will be joining 5,000 athletes from around the country and Caribbean in Orlando next summer. The sport? Bocce ball.
8 DAYS AGO

Our "Made in Tampa Bay" holiday gift guide returns for a second year to help you shop locally. Each week, we feature local artists, cooks, and businesses who make products locally. Here’s a few that may make great gift ideas for those hard-to-buy-for folks on your list. For more information...
SHOPPING・13 DAYS AGO
WFLA

Where can I get a real Christmas tree in Tampa Bay?

The countdown to Christmas is on and people are on the hunt for the perfect tree. Unfortunately for some, tree farm owners are saying their pickings are looking a little slim this year.
TAMPA, FL・5 DAYS AGO
10 Tampa Bay

Here's where to get a COVID-19 test around Tampa Bay

ST. PETERSBURG, Fla. — As more states across the U.S. are now reporting cases of "variant of concern" omicron and the Biden administration implements more stringent restrictions on international travelers, it's important to know where you can get a COVID-19 test. Starting Dec. 6, President Joe Biden said all travelers...
PUBLIC HEALTH・1 DAY AGO

No event is as celebratory as a parade. So what better way to celebrate the season than with a festive holiday-themed one? Whether on land or on the water, there are several parades in the area that are sure to bring on the holiday cheer! Holiday Boat Parades in Tampa Bay: 36th Annual Treasure Island […]
HOLIDAY, FL・9 DAYS AGO
Axios Tampa Bay

People moving to the Sunshine State are getting their first lessons about Florida scammers the hard way.Why it matters: Complaints to the Florida Department of Agriculture and Consumer Services about moving companies are on track to double from last year, WFTS reports. Nearly 1,200 people reported moving company problems between January and early November. The latest: Changes could be coming next legislative session to strengthen Florida's moving laws and crack down on scams.Sen. Ed Hooper (R-Clearwater) told WFTS he's drafting legislation to protect consumers."Obviously they know the worst that is happening is a slap on the wrist and a...
CLEARWATER, FL・4 DAYS AGO
ABC Action News WFTS

Residential evictions continue to increase in Tampa Bay, but some of these evictions are happening while residents are waiting for emergency rental assistance from programs like OUR Florida.
FLORIDA STATE・6 DAYS AGO
Axios Tampa Bay

Things to do this weekend in Tampa Bay

🏛 Museum pro tips: A Bank of America card gets you free entry to participating museums around Tampa Bay and the U.S. the first weekend of each month — AKA this weekend.Plus, did you know you can get free museum passes at the library? Pinellas, Hillsborough, Pasco, Lakeland and Manatee all have them.🎶 Uke It Out Fest: Hear everything from reggae and bluegrass to Americana and rock on ukes at this two-night festival. Plus ukulele lessons, a Muddy Waters of the Ukulele contest, an open mic and a Beatles and Tom Petty jam.Friday 7-11:30pm at New World Brewery in Tampa...
TAMPA, FL・4 DAYS AGO

ST. PETERSBURG, Fla. (WFLA) – The Coast Guard and Tampa Police Department Marine Unit put an end to an illegal charter boat carrying 13 passengers, according to a release. According to the U.S. Coast Guard, a Coast Guard Sector St. Petersburg boarding team investigated the 48-foot passenger boat and found that was operating as a […]
TAMPA, FL・1 DAY AGO
Axios Tampa Bay

It's only going to get more difficult and expensive to buy a house in Tampa Bay.What's happening: Tampa had the second-highest national home price increase for a metro market in September 2021 with a 27.7% increase, per the Associated Press, behind only Phoenix.Home values increased 28.7% from Oct. 2020 to Oct. 2021, valuing the average Tampa Bay home at $316,379, according to Zillow.In both September and October, Zillow reported that homes spent a median of just six days on the market.Around the Bay: In Bradenton, demand is outweighing supply and even with increased prices, competition for homes is fierce.In October,...
TAMPA, FL・5 DAYS AGO
Tampa Bay Times

LINE: Lightning -180, Kraken +149; over/under is 6.5. BOTTOM LINE: The Seattle Kraken visit Tampa Bay after the Lightning shut out Philadelphia 4-0. Andrei Vasilevskiy earned the victory in the net for Tampa Bay after recording 34 saves. The Lightning are 6-3-2 at home. Tampa Bay is the top team...
12 DAYS AGO
995qyk.com

New Tampa Bay Reality ShowTampa coming to Netflix. Check out the Trailer below. Our town will soon be home to a new reality show on Netflix about, Real Estate Drama!. Netflix released a new teaser of “Selling Tampa” on Monday. If you haven’t heard, “Selling Tampa” is the spin-off series of the popular show “Selling Sunset,” which is a reality show about a group of real-estate agents selling high-end homes in Los Angeles.
TAMPA, FL・13 DAYS AGO
ESPN

Wander Franco, Tampa Bay Rays both get what they want in $182 million deal

ST. PETERSBURG, Fla. -- Wander Franco and the Tampa Bay Rays both got what they wanted in the shortstop's $182 million, 11-year deal that includes a club option for the 2033 season. Franco, 20, got financial security for his family and Tampa Bay locked up a homegrown budding star long...
8 DAYS AGO
Tampa Bay Times

As always on Thanksgiving, many businesses are closed for the day. But if you need some last-minute pie ingredients, a caffeine jolt or just a reason to get out of (escape?) the house, you’ve got a few options. Check out our list below of Thanksgiving hours at businesses around the Tampa Bay area.
TAMPA, FL・12 DAYS AGO