Tom Cotton swipes at Garland: ‘Thank God you are not on the Supreme Court’ 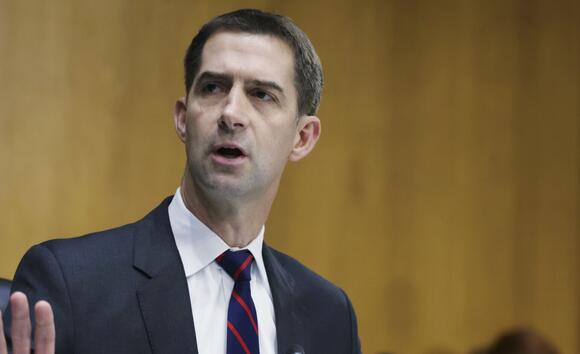 I n a tense exchange Wednesday at a Senate Judiciary Committee hearing, Sen. Tom Cotton told Attorney General Merrick Garland, “Thank God you are not on the Supreme Court.”

The remark was a swipe at Garland, who was nominated to serve on the Supreme Court by then-President Barack Obama in 2016. At the time, Sen. Mitch McConnell, who was the majority leader, declined to confirm him, arguing that such a confirmation should not take place in an election year. Neil Gorsuch was later nominated by former President Donald Trump and confirmed to the Supreme Court to fill the vacancy left by the death of Justice Antonin Scalia. In 2020, Justice Amy Coney Barrett was confirmed just days before the election while McConnell was still the majority leader.

DURBIN INVOKES JAN. 6 AS HE DEFENDS SCHOOL BOARD LETTER DURING GARLAND HEARING

In a heated line of questioning, Cotton asked Garland about a controversial memo directing the FBI to monitor threats of violence against school board members that Cotton equated to the “harassment and intimidation” of parents protesting aspects of school curricula.

Cotton then asked Garland about the violence that took place before he began his role.

“Have you issued a memorandum like your Oct. 4 memorandum about the Black Lives Matter riots last summer?” Cotton asked.

“They were under the previous administration,” said Garland, who was confirmed as attorney general in March.

Cotton then turned to a reported rape at a school in Loudoun County, Virginia, accusing Garland of condemning the victim’s father for protesting the school’s response.

Garland called the incident “the most horrific crime I could imagine,” and he said the victim’s father is protected by the First Amendment to protest.

"Thank God you are not on the Supreme Court,” Cotton said. “You should resign in disgrace, judge."

Cotton then stormed out of the hearing room.

Senate Judiciary Committee Chairman Dick Durbin then asked Garland if he would like to continue his response.

“The memorandum is not about parents being able to object in their school boards,” Garland said. “They are protected by the First Amendment as long as there are no threats of violence.”

Couldn’t agree more. Watching this hearing the good AG knows he was used by the White House and NSAB as a political tool to shut down parents. He has yet to cite one case that warrants federal involvement

watched his testimony today. This man is overwhelmed and cannot handle the job. Ah..uh...um...are NOT answers. He is weak, does not fact check and he is NOT able to undertake the responsibility of AG.

Tom Cotton is a criminal who violated the Logan Act. Cotton should be glad Garland isn’t on the Supreme Court. He might be in prison now if we had judges that REALLY upheld the law rather than Trump cult judges.

This ACLU lawyer is the Biden administration's toughest judicial fight yet

Oral arguments in the latest abortion case before the Supreme Court sparked conservative hopes and liberal fears that Roe v. Wade might be overturned.
CONGRESS & COURTS・2 DAYS AGO
WashingtonExaminer

Sen. Tom Cotton, R-Ark., argued New York City Mayor Bill de Blasio is "in a contest" with other liberal leaders to have the most radical COVID vaccine proposals, after he announced the vaccine mandate would apply to private sector workers at the end of December. Sen. Cotton joined the "Brian Kilmeade Show" to discuss the announcement, accusing him of "COVID theatrics."
U.S. POLITICS・7 HOURS AGO

Jim Acosta Tells Democrats to Think 'What Would Mitch Do?' Over Filibuster

The CNN anchor said Democrats had been "outmaneuvered" by the Senate minority leader, as he questioned the balance of the Supreme Court.
CONGRESS & COURTS・1 DAY AGO
Axios

Republican and Democratic politicians, including former Senate colleagues, are sharing condolences and memories commemorating the life of Bob Dole, who passed away at 98 on Sunday morning. The big picture: Dole, the Republican presidential nominee in 1996, was the longest-serving Republican leader in the Senate until 2018, when current Senate...
CONGRESS & COURTS・1 DAY AGO
Washington Post

It’s time to say it: The conservatives on the Supreme Court lied to us all

Yes, I’m talking about the conservative justices on the Supreme Court, and the abortion rights those justices have now made clear they will eviscerate. Opinions to start the day, in your inbox. Sign up. They weren’t just evasive, or vague, or deceptive. They lied. They lied to Congress and to...
CONGRESS & COURTS・3 DAYS AGO
The Guardian

About 11 minutes into this week’s hearing on abortion rights at the US supreme court, the floor was taken by Sonia Sotomayor, one of the three beleaguered liberal-leaning justices left on the court after its sharp rightward shift under Donald Trump. Sotomayor began by noting that in the past 30...
CONGRESS & COURTS・2 DAYS AGO

Life at the Supreme Court

The Supreme Court heard arguments on Wednesday concerning Dobbs v. Jackson’s Women’s Health Organization. It's a case that judges the legality of Mississippi’s ban on nearly all abortions after 15 weeks. While the pro-life movement has, for decades, hoped the Supreme Court would eventually hear a case that would challenge...
CONGRESS & COURTS・4 DAYS AGO
19thnews.org

What you need to know about the Supreme Court case that could overturn Roe v. Wade

The Supreme Court will hear arguments on Wednesday in a case that could end almost 50 years of guaranteed abortion rights. Audio from the arguments will be streamed on the Supreme Court’s website, beginning at 10 a.m. Dobbs v. Jackson Women’s Health Organization examines the constitutionality of a law from...
CONGRESS & COURTS・6 DAYS AGO
USA TODAY

Why the Supreme Court may look to China as it reconsiders Roe v. Wade

Senator Tom Cotton released a statement on Monday, Dec. 6, regarding the Biden Administration's decision to proceed with a diplomatic boycott of the 2022 Winter Olympics in Beijing, calling the decision a "half measure."
CONGRESS & COURTS・7 HOURS AGO
CBS DFW

Flags to be flown at half-staff for former senator Robert J. Dole as Biden remembers ‘statesman’ and friend

The Arkansas Republican and New Hampshire Democrat argued over the Nord Stream 2 pipeline between Russia and Germany.
FOREIGN POLICY・3 DAYS AGO

The Supreme Court heard arguments on a Mississippi law that would ban most abortions after 15 weeks of pregnancy.
CONGRESS & COURTS・3 DAYS AGO
Health Digest

Bob Dole's Cause Of Death Explained

Longtime Republican leader Bob Dole passed away at 98. Though no official cause of death was stated, the former senator was diagnosed with lung cancer in 2021.
NEW YORK CITY, NY・13 HOURS AGO
Washington Post

Benjamin Ginsberg, a veteran Republican election lawyer, just issued a stark warning to lawmakers in his own party: If you don’t act now to protect our system, the losing candidate in the 2024 presidential election might seek to overturn the will of the people — and succeed. Opinions to start...
PRESIDENTIAL ELECTION・11 HOURS AGO