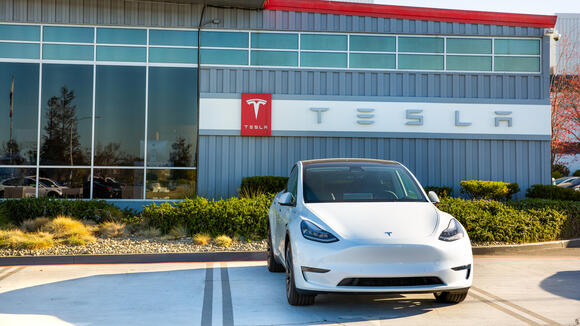 Proving that it is undergoing a complete transformation and intends to stay ahead of competition after being fresh out of bankruptcy, Hertz is accumulating industry coups : Today, the car rental company announced it would make up to 50,000 Teslas available to Uber drivers.

The announcement comes on the heels of Monday’s news that it had acquired 100,000 Teslas in what represents the largest electric vehicle fleet in North America and one of the largest in the world.

It’s unclear whether Hertz’s 50,000-vehicle deal with Uber involves half of the fleet it has ordered from Uber, according to Barron’s.

The initial 100,000-car order is equivalent to about 10% of what the automaker can currently produce in a year, Bloomberg reported, which might help Hertz prevent rivals from replicating the strategy.

To help it transform post-bankruptcy and lead these bold moves is Hertz’s new interim CEO, Mark Fields. The former president and CEO of Ford Motor Company was hired earlier this month.

Hertz said it will make the 50,000 Teslas available for drivers to rent by 2023, exclusively for drivers using the Uber network in the US. This is the largest expansion of electric vehicles (EVs) on a mobility platform in North America and one of the largest globally, marking another step towards Uber’s zero-emissions goal, according to an announcement.

Tesla rentals will start out at $334 a week and fall to $299 or lower as the program gets underway, including insurance and maintenance.

“This new program with Hertz aims to create positive environmental benefits by reaching rental drivers, who are often looking to offer rides for more hours and more miles than the average driver. Research shows that when rideshare drivers go electric, they realize 3 to 4 times greater emissions savings than average car owners,” according to the announcement.

Hertz added that while this partnership is a step forward to advance electrification on the Uber platform, it’s important to note that owning an electric vehicle is still too often more expensive than a traditional gas-powered vehicle.

Tesla CEO Elon Musk asked his employees to try to minimize the cost of deliveries "rather than spending heavily on expedite fees, overtime and temporary contractors just so that cars arrive in Q4."...
INDUSTRY・1 DAY AGO
GOBankingRates

Yes, You Can Buy a Tesla With Dogecoin — Only Not From Tesla Itself

You can now buy a Tesla using dogecoin, but you'll have to go through a different company to do it. See: Tesla's Musk Calls Chip Shortage 'Problematic' Amid Fierce Chinese EV Competition Find: Looking...
ECONOMY・6 DAYS AGO
GOBankingRates

Electric vehicle company Rivian saw its stock crash following the announcement that it no longer plans to co-develop an EV with Ford. See: Here's How Much You'd Save on Gas With a Tesla and Other...
IRVINE, CA・7 DAYS AGO
CBS San Francisco

GILROY (KPIX) — After an examiner flunked a teen driving a Tesla due to its unique brake system, the California Department of Motor Vehicles has instructed its staff to treat electric vehicles in the same manner as conventional gas-powered vehicles, during behind-the-wheel driving tests. The communication to the agency’s employees comes in the wake of a November 23 driving test at the Gilroy office at 6984 Automall Parkway. Bryce Rosenblum, 16, embarked on his driving test alongside the DMV instructor in a Tesla Model 3, with regenerative braking activated in standard mode. “Right off the bat, she warns me that the car...
SAN JOSE, CA・21 HOURS AGO

In an interview with CNBC’s Andrew Sorkin this past week, General Motors CEO Mary Barra shared some interesting alternative facts about Tesla and how much Tesla pays its employees. To be fair, she was asked some tough questions and Tesla isn’t her company. However, her claim that, as per her last look, “this was not the case,” was said in reference to Tesla’s employees making more than GM’s employees. She also insinuated that Tesla’s employees didn’t receive benefits such as health insurance with that answer — though, it’s hard to be completely certain what she was responding to. Elon Musk quickly debunked this in a reply to a tweet by Sawyer Merritt.
BUSINESS・1 DAY AGO
MarketWatch

More car shoppers are thinking about EVs, but still holding back

Automakers are rolling out dozens of new EVs this year, but buyers still have a few reservations.
NEW YORK CITY, NY・18 HOURS AGO
electrek.co

Elon Musk stayed true to his word and told Tesla employees not to worry as much about delivering as many cars as possible during this end-of-quarter delivery wave and instead focus on cost. It’s a significant change to what has been Tesla’s strategy for years. Tesla has been known to...
BUSINESS・2 DAYS AGO
24/7 Wall St.

Car sales began to explode this year, but there are many challenges — mostly lack of inventory due to a shortage of chips used in cars. Despite the challenges, satisfaction with the sales experience at the dealership is unchanged from last year, according to J.D. Power. Not all dealers perform well, however, and the brand […]
ECONOMY・3 DAYS AGO

Modern solutions create modern problems: that’s the lesson Tesla owners received in brutal fashion recently. On the night of November 19, the Tesla app which owners use as the key to unlock and start their car went down. That meant there was no getting inside the cars since having a manual override would be stupid and backwards. Welcome to the future of driving.
CELL PHONES・1 DAY AGO
stockxpo.com

Car-rental customers could soon see more electric-vehicle options on airport lots and other places where they are looking to reserve a ride. The rental-car industry, long a big bulk-purchaser of new models in the car business, is sharpening efforts to add more battery-powered vehicles to fleets, the latest in a broader global shift among companies embracing greener technologies to cut their greenhouse-gas emissions.
ECONOMY・3 DAYS AGO
electrek.co

Uber drivers will no longer be able to 'cherry pick' customers

Uber is preparing to crack down on drivers who repeatedly cancel on passengers amid mounting frustration from users about its reliability. The company recently tweaked its privacy policies to state that it may consider how frequently drivers have rejected journeys in the past when assigning them to new jobs. The...
TRAFFIC・9 DAYS AGO
insideevs.com

A new video, recorded by the Tesla Sentry Mode on November 17, 2021 in California, reveals an amazing event at one of the charging points (it appears to be a free Volta charging point). It starts when a Tesla vehicle was connected to the charging point and another vehicle arrived...
CARS・10 DAYS AGO
techxplore.com

Tesla drivers back behind wheel after server problem, Musk says

Tesla CEO Elon Musk reported late Friday that an app problem that was keeping a number of drivers worldwide from using their cars was on the mend after a server issue was resolved. Multiple Tesla drivers tweeted that they were no longer able to start their cars with their phone...
TECHNOLOGY・10 DAYS AGO
Redorbit.com

A temporary outage in Tesla’s software left Tesla vehicle owners unable to unlock their vehicles using the mobile app. Some owners took to social media to report the problem. Elon Musk replied to one owner who was experiencing an issue:. At first, the problem seemed to be limited to North...
TECHNOLOGY・10 DAYS AGO
WJLA

Drivers needed: Uber and Lyft fares are at near-record highs in the DC area

WASHINGTON (7News) — While they’ve dropped slightly since the summer, average prices for rideshare services like Uber and Lyft remain at near-record highs in the DC area, according to the research firm YipitData. Yipitdata tracks prices for UberX and Lyft trips nationwide. The firm’s data shows the average price was...
TRAFFIC・12 DAYS AGO
New York Post

Nissan is recharging its electrification efforts. The automaker, whose Leaf was the first modern mass market electric car launched in the US a decade ago, will invest $18 billion through 2030 to develop 23 electrified models that includes hybrids and 15 all-electric vehicles. “The role of companies to address societal...
ECONOMY・1 DAY AGO
enplugged.com

My friend Sasha scoffed as we sipped lattes for our Sunday morning ritual. Across the table, Brian just shrugged, confident in his claim. “You’ll see. Soon even your parents are going to want one. Top Gear is just lying.”. I watched the exchange between my two friends, familiar with this...
ECONOMY・2 DAYS AGO
imore.com