By WFLA 8 On Your Side Staff, Dylan Abad, Nexstar Media Wire
BigCountryHomepage
2021-10-27 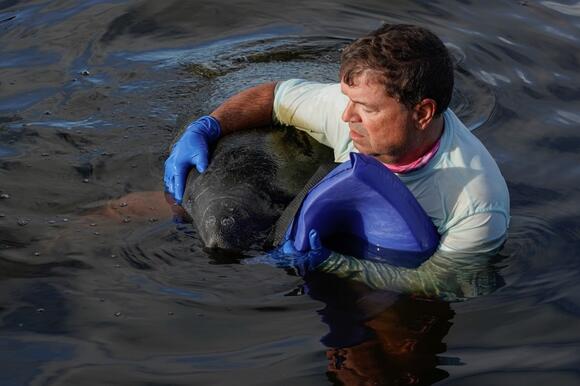 MANATEE COUNTY, Fla. ( WFLA ) — A quick-thinking worker at a Southwest Florida boat club helped rescue a manatee believed to be poisoned by a toxic red tide.

Mikko Claxton, of Bradenton, Florida said he was taking photos when he found out about the manatee in distress and went over to see what was happening. Claxton said he found Don Swartz, an employee at members-only Freedom Boat Club, holding the animal with its nostrils above water.

“I asked him what was wrong with the manatee and he said they believe it’s due to red tide, that it’s having trouble breathing,” Claxton said.

According to VisitFlorida.org , red tide is a concentration of an alga that produces a toxin that can affect the central nervous system of fish.

Swartz and another employee from the Freedom Boat Club said they followed the manatee by boat after their manager heard a radio call stating a lifeless manatee was floating in the river.

According to a statement from the Florida Fish and Wildlife Conservation Commission (FWC), wind and waves then pushed the manatee against a rocky shoreline.

“Fifteen minutes later the manatee rolled over and started to drown,” Swartz said.

Under the direction of the FWC, Swartz jumped in, rolling the manatee over to hold its nostrils above the water. After 40 minutes, Swartz said rescuers arrived and took over.

A marine mammal rescue team then stretchered the approximately 9-foot manatee onto a capture boat and transported it to a nearby boat ramp. The manatee was then loaded onto a transport truck and transported to SeaWorld.

Swartz added the manatee “appeared to have eaten toxic red tide seagrass,” but was told the manatee had a 95% chance of recovery.

“We hope to be part of her placement back into the wild after recovery,” Swartz said.

According to the FWC, never push a marine mammal back out to sea if found stranded on the beach. If you see a marine mammal in distress, you should immediately contact wildlife officials.

Underwater photographer Deron Verbeck was diving off the coast of Hawaii's Big Island on Friday, Nov. 26, when he thought he saw a school of ulua fish.
HAWAII STATE・1 DAY AGO
BigCountryHomepage

A 20-year-old Indiana woman has not been seen or heard from in three weeks since she vanished in California under mysterious circumstances, her family said.
CALIFORNIA STATE・14 HOURS AGO
BigCountryHomepage

A 13-year-old was shot in Florida Tuesday after neighbors said they heard an argument over an electric scooter.
FLORIDA STATE・4 DAYS AGO